Beaumont has never really been my cat. He was Dave’s cat, then he became Catie’s cat. From the day she was born (even before then, really), she has been his person. 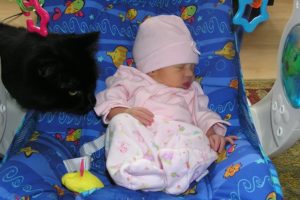 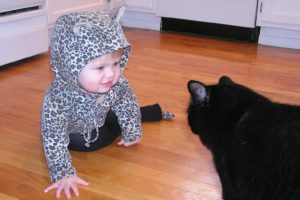 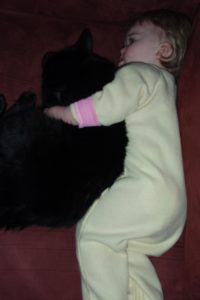 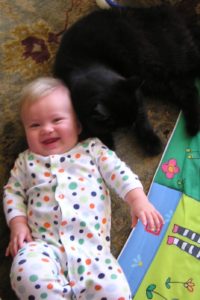 When Catie was a baby, we lived on two acres out in the middle of nowhere. We were the only people in our area who didn’t have horses or other livestock, just cats. I worked from home part-time, and it was really isolating, so to keep from going crazy, I would take Catie for walks every day. It started in the Baby Bjorn, then the backpack carrier, and eventually she was walking on her own. But everywhere we went on our walks, Beaumont would follow us. 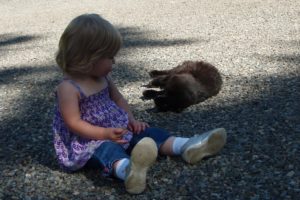 More than once, we had neighbors stop us to tell us that they’d never seen anyone walking their cat before. He wasn’t on a leash or anything, he just followed us – or I should say, he followed Catie – everywhere. 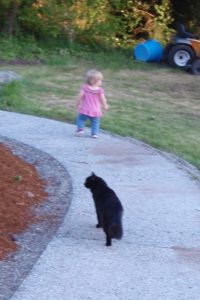 I’ve had the opportunity to get rid of Beaumont twice, and both times, I didn’t do it because of Catie. The first time was when we moved from Washington to North Carolina. Since we had been living in such a rural area, the cats were used to being both indoors and outdoors. But in NC, we were going to be moving to the suburbs, and we wouldn’t be able to let them roam, and it felt like it would be a hard adjustment for them. We found new homes for two of the cats, Cleo and Greta, but with Beaumont, I just thought that he loved Catie so much, maybe he could adjust to being an indoor cat. And I was right, he did. 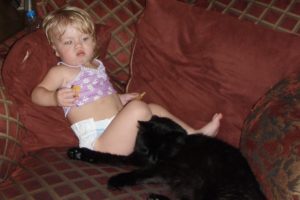 The second time was when Dave and I separated. Since he had been Dave’s cat, Dave offered to take Beaumont when he moved out. And I was tempted, because I was already overwhelmed with a 4 year-old and a newborn. But again, I thought about Catie. She went through so much so fast: she got a baby sister, her dad moved out, and we moved to a new house, all in the span of less than 6 months. Taking her cat away felt like an extra layer of trauma, and I just couldn’t do that to her. And I’m so glad I didn’t, because as it turned out, our other cat, Teenie, passed away just a few months later. I can’t imagine how much worse that would’ve been if she didn’t have Beaumont. 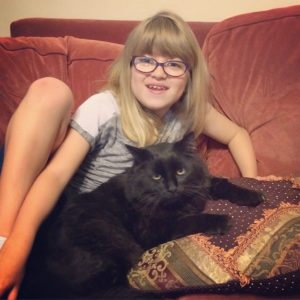 Beaumont loved Lucy too, of course. I don’t think I’ve ever met a cat that’s more tolerant of being manhandled by little kids. 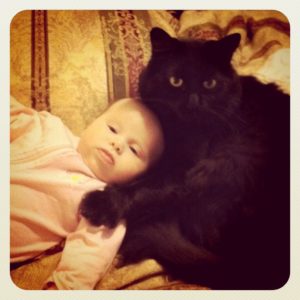 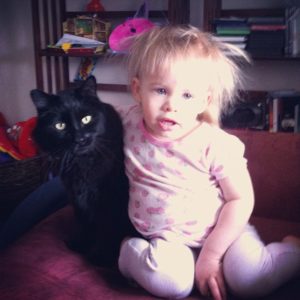 And Lucy really does love him, but she’s never been as much of an animal person as Catie. The bond he has with Catie is really something special and rare.

Beaumont adapted really well to both Spyro Jones and Roxie, too. Like, a million times better than I could have expected. He really has been just the best at adjusting to all manner of upheaval in his little world. 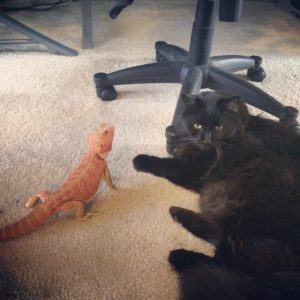 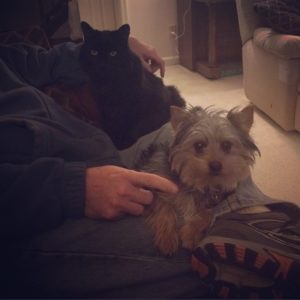 On the nights when the kids are here, he follows us upstairs at bedtime, he gets in Catie’s bed while she’s brushing her teeth, and waits for her. He sleeps with her for a few hours, until she starts rolling around (which she always does, that girl sleeps like a tornado), then he’ll get up and come get in bed between Chris and me.

This past week, his health took a turn really suddenly. He’s mostly stopped eating and drinking. He’s obviously in pain and suffering. He only purrs when Catie is the one who pets him, nobody else. (She really is his person.)

I know this is the end. I realized on Friday that I needed to have him put to sleep, but it was Catie’s birthday, and I just couldn’t do that to her – I don’t want her to associate her birthday with Beaumont dying for the rest of her life. Which feels horribly selfish of me, to keep him alive because the date was inconvenient, but I don’t know what else to do.

The vet gave us pain medication, and we’re trying to keep him comfortable for a few days. But we’re going to have to have him put to sleep sometime soon. They’ll make housecalls for euthanizing, which I think I’ll do. He can be peaceful in his own home, surrounded by his people, not scared in a vet’s office. 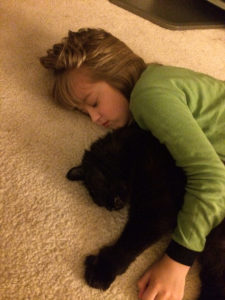 Thank you for being such a good kitty to my babies, Beaumont. You are such a good boy, we are going to miss you so much.