Back when my cat Teenie died a couple of years ago, Catie was devastated, and I ended up getting her some fish as a consolation pet. The 3 glowfish died shortly after we got them, then we got a betta fish, which lived for about a year and a half.

Catie still sometimes cries that she misses Teenie. It’s usually because she’s upset about something else, and Teenie becomes the placeholder for whatever it is that’s making her feel sad. But it’s obvious that cat took up a pretty big space in her heart.

I think Catie figured out quickly that the fish were not a good substitute pet for a cat. Since she’s been obsessed with dinosaurs since she could talk, she started asking for a reptile. She had her heart set on getting either a snake or a lizard.

I held off as long as I could, but it’s been over two years that she’s been wanting a pet reptile, and her interest hasn’t waned yet. She’d regularly bring home books from the library about lizards and other reptiles, and talk about, “someday, when I have one…”

About a month ago, I gave up the fight. We started researching different options. From everything I read, it seemed like bearded dragons were the considered the best pet as a “starter reptile.”

We went to PetSmart. They had a baby bearded dragon at the store, but since I was planning to get a terrarium off craigslist (because that stuff is expensive to buy new), we weren’t able to take him home that day.

But, they let Catie hold him, and she pretty much instantly fell in love with him.

Later that afternoon, at my parents’ house, she drew a picture of her experience. Note that Lucy is pretty indifferent about the whole lizard concept. 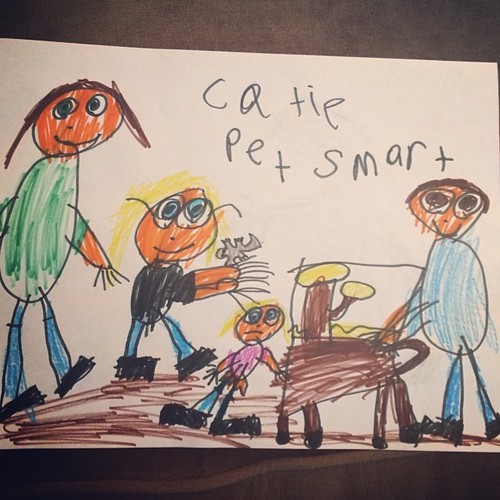 I found a used terrarium setup yesterday. We went back to PetSmart and bought the baby bearded dragon. 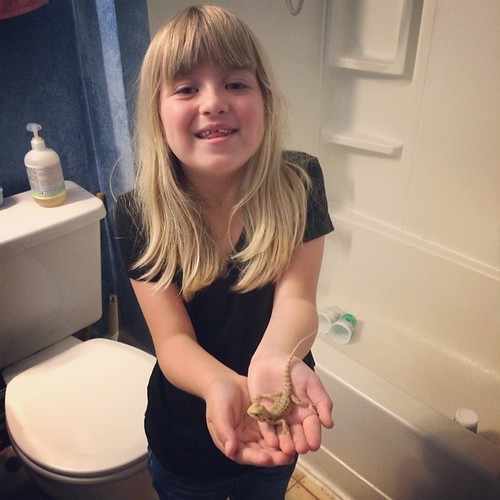 Catie named him Spyro Jones. Spyro is for her favorite Skylander character — he’s a dragon, so I guess the name is fitting for a bearded dragon. And Jones is for Martha Jones, her favorite of Doctor Who’s companions. (I take no credit for turning her into a Doctor Who fangirl. That is entirely her dad’s influence.)

She is completely smitten with the little guy. Last night, she couldn’t bring herself to go to bed because she didn’t want to stop watching him. 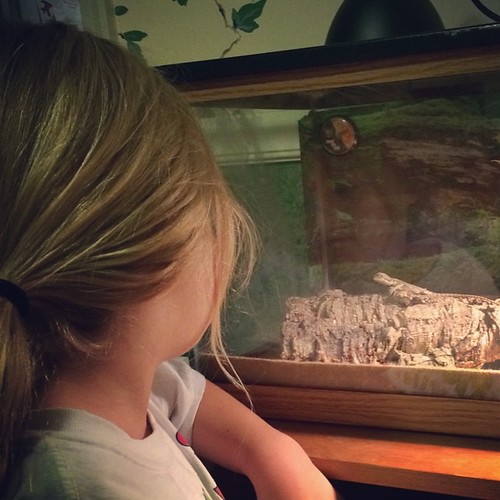 This morning, she woke up with pink eye, so I kept her home from school. (We’ve all had it in the past month. We went to the doctor and got some eye drops, she’ll be fine in a couple days.) If I didn’t know better, I’d think she planned getting sick so she could stay home with her new lizard. 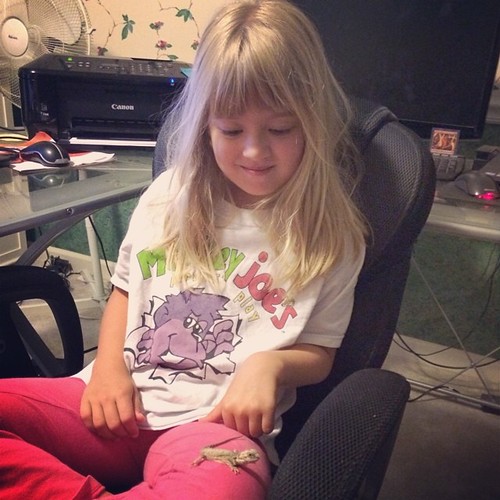 It’s a weird thing, I have no big love of reptiles, and I am grossed out that I have a container of live crickets in my house that I need to feed him.

But at the same time, I have to admit that I’m developing a weird affection for this little lizard too, simply because he makes my Catie so happy. And really, what more can I want for my kids than that?