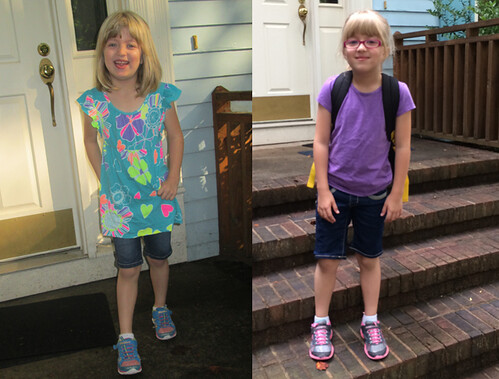 The obligatory “first and last day” pictures to show how much she’s grown this past year. Which, WOW. I now understand how I’ve spent a small fortune on new pants and shoes for this child.

This school year has been really hard on Catie. I don’t think she and her teacher ever quite “clicked.” (To be honest, I never quite clicked with her either, which I thought was maybe because I was misreading her or something, until Dave mentioned that he didn’t much like her either, and then I felt better about it.) And it’s not that she’s a bad teacher, just a different personality type. And her teacher had a lot of health problems (of course, not her fault at all), so they had different substitute teachers filling in a good portion of the year, which caused even more upheaval.

Combine that with the fact that none of her friends from kindergarten were in her first grade class, because we changed her from track 1 to track 4 (it’s a different year-round school calendar, and track 4 worked a lot better for our family as far as vacations and time off). So she had to make new friends from scratch, which was tough, but she did.

It’s been challenging, and she’s gotten very sullen about the idea of school. She says that she hates school and doesn’t want to go. Which makes me sad for her, because I remember that I loved school when I was her age. (I didn’t start to hate school until I had a really horrible teacher in 4th grade. After that, I was fine until I was a teenager, when I pretty much hated everything.)

I mean, if I’m being totally honest here? The pet bearded dragon was more of a reward for her surviving this past school year than anything else. I didn’t phrase it to her that way, but that’s how it felt to me. “Ok, you did it, here’s this thing that you’ve been wanting since you were five years old.”

Because it’s a year-round school, her summer vacation is basically just the month of July. Which seems horribly unfair at first glance, until you remember the 3-week breaks in the fall and spring, and the 5-week break at Christmas. I’m a big fan of year-round school. She doesn’t have time to get into the “whiny mode” of summer vacation where she complains about being bored. It’s 4 weeks and then it’s done. And those intermittent breaks throughout the year are really nice.

I was hoping that she’d get a teacher for second grade that would get her “spark” back, and get her excited about learning new things. I found out that her teacher next year is going to be a young, male teacher. He just got his degree in 2013 and he’s only been teaching one year. I’m hoping this will be the “reset” button that Catie needs. My guess is that a younger teacher is more likely to be enthusiastic and get the kids’ interest, and my hope is that a guy will be more accepting of Catie not being a traditional girly-girl type. Not that that was the main problem with Catie’s first grade teacher, but I think that was at least part of the issue, that she didn’t fit neatly into a mold.

I read the introduction letter that her new teacher sent home to Catie, and she seems to be (almost?) excited about being in his class. I hope it stays that way. We really need a reset button after this past year she’s had.

So! First grade is in the books, and I’m thankful we’re done with it.

Meanwhile, today is Lucy’s first time having “water play day” at daycare, and she was so excited about wearing her swimsuit to school that when I took Catie’s “last day of school” picture, she wanted me to take her picture too. Naturally, I obliged. 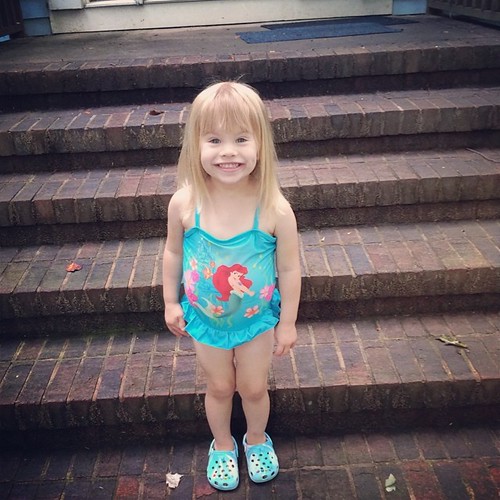 That picture makes me laugh every time I see it. The joy on her face is contagious.

(Side note: I’ll have to keep a spare swimsuit and towel in my car for the rest of the summer, because you know that I will never remember Water Play Fridays from now until the end of August.)

Lucy is also starting 3 year-old pre-K in July. Which isn’t a big thing on her end, she isn’t even changing classrooms, it’s just a different curriculum. But still.

Milestones, y’all. Milestones all over the place.

4 thoughts on “first grade is in the books”