People keep asking me how the new job is going, so I figured that I should probably just blog it and get it all out there.

It’s good. It’s really really good. The people are great, and the technology is pretty cutting-edge stuff and very interesting, even though a lot of it is WAY over my head. (I’m learning it. Slowly.) And yeah, ok, I’m working in a cubicle, but it’s a pretty darn large cube (like, I have way more desk space than I did at Microsoft where I shared an office with another person), and most everybody around here is really quiet, so it’s easy to concentrate. 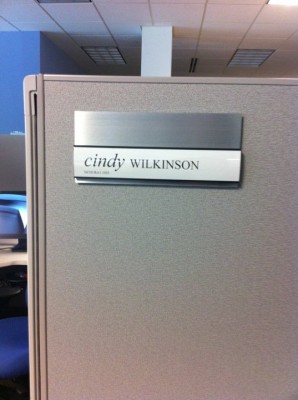 This is my second nameplate because the first one said “Cynthia,” and I asked the office manager to please get me another one because nobody actually calls me that. She’s awesome and printed up a new one for me.

The main thing I’m struggling with is that it’s been four years – FOUR. YEARS. – since the last time I had a full-time office job. So even though it’s a very casual environment here (i.e., as long as I don’t show up in pajama pants, I’m fine; most of the people here are all jeans-and-t-shirts, all the time), it’s still weird just to go through the process of getting up early every day, making myself at least somewhat presentable, packing my lunch, etc. Add that in with Catie’s normal morning routine, and my mornings have gotten pretty crazy. I think it’ll settle down once we find our groove, it’s just that transitions (especially those that involve little kids) are never easy.

Also? I haven’t had to use this much of my brain for such an extended period of time in a really, really long time, so just that alone is kicking my butt. By the time the end of the workday rolls around, I feel like I’ve been flattened by a steam roller. It’s a good tired, a “wow, I really did a LOT today” kind of tired, but the exhaustion makes it hard to then switch back into Mommy Mode and really engage with Catie in the evenings. Again, this is stuff that I know will get easier over time. It’s just finding our “new normal” that’s rough.

Oh, and about Catie… Man. I guess I was naive when I thought that, hey, she was going to full-time daycare before and she’ll keep going to full-time daycare now, no big deal, right? I forget that she picks up on everything. So the fact that Dave and I are dropping her off at daycare together (because we’ve been carpooling), and then both of us leave together to go someplace she doesn’t know… it’s definitely thrown her for a loop. And she’s working me over like a pro.

Example 1: Yesterday she told me how she sat under the slide on the playground and cried for me because she missed me so much. (I thought she was b.s.-ing me, but her daycare teacher confirmed that yes, she really did do that.)

Example 2: At bedtime, she didn’t want me to leave her room or say goodnight. She said, “But I’ll miss you if you leave. I’m almost about to cry.”

Jeez, kid. Way to show a flair for the dramatic. And yes, I know that she’s just testing the boundaries of this new situation, which is all normal developmental stuff, but… Yeah. It gets to me. I’ll admit that I did stay in her room to snuggle and sing lullabies for an extra 15 minutes last night.

So that’s what’s going on here. Trying to find our groove and keep everybody sane and maintain a reasonable bedtime. It’s tough, but it’s also really good for all of us.

And you know what’s even better? I’m earning enough money that by next month, we ought to be able to afford a twice-a-month housekeeper. OH HELL YES, PLEASE AND THANK YOU.

9 thoughts on “About the Job”