Here’s what I learned through doing it twice, and lasting about 10-14 days each time: I should probably avoid sugar and grains for the most part. Dairy and legumes aren’t much of an issue for me, but sugar and grains definitely affect my energy levels, and make me feel bloated and gross. So I guess it was a worthwhile experiment to learn what my “bad” foods are.

The problem is that foods containing sugar and grains tend to be my favorite foods (cookies! donuts! cake!), so it isn’t practical to avoid them altogether. But I’m trying to adjust my usual daily routine so that they become occasional treats rather than daily staples, and so far that’s working ok.

Also: artificial sweeteners. This is the first time in my life I’ve cut out artificial sweeteners completely. I was a Diet Coke addict from middle school until about 2 years ago. After I gave it up, though, I always put Sweet & Low in my coffee and iced tea. I’ve cut that out – I gave up iced tea completely, and now just put a little milk in my coffee. And I’ve noticed that since I started doing that, I have significantly fewer headaches.

(The Whole30 book mentions that artificial sweeteners are several hundred times sweeter per tablespoon than regular sugar, so they tend to trigger the part of our brain that craves more sugar. I don’t know how much of that science is true, but I’ve noticed that I have less frequent “OMG I need some Skittles” urges now, so that’s good. I mean, I still want the Skittles, don’t get me wrong, but it’s less… urgent? I don’t know. It’s odd.)

And yeah, this post so far can pretty much be summed up with this GIF:

This weekend, the girls were with me, and Chris and I really wanted to see the new Avengers movie. I thought Catie would enjoy it, because she seemed to like the first movie, but she wasn’t in the mood. So, we left the girls with my parents on Saturday night, and had a little movie date night. 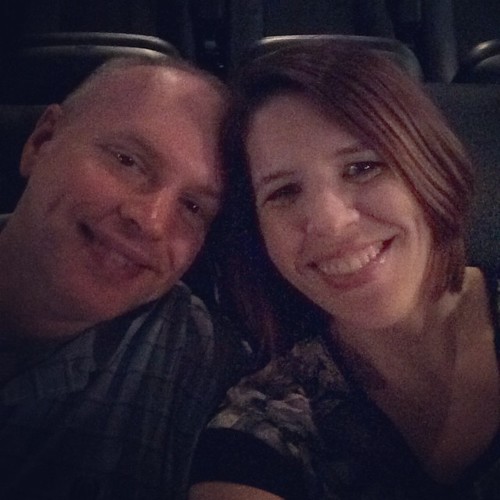 The movie was good – honestly, I never watched any comic book movies until Chris and I started dating (well, ok, Christopher Reeve as Superman when I was a kid, I guess). Now I’ve seen several of the Marvel movies, and I think they’re pretty fun. I mean, they’re not going to win any Oscars (except maybe for special effects), but they’re entertaining.

Thinking of other TV/movie stuff, here’s some random notes on things we’re watching:

* Marvel’s Agents of SHIELD – Sort of related to the Avengers thing. It’s more of a spy show than a superhero-y show, and it’s pretty light and fun to watch. (I mean, the superhero/alien stuff does come up, but it’s not the main focus.) Also, I kind of have a crush on Clark Gregg. But I tend to go for nerdy, funny guys, and he is a total nerd who gets the best one-liners.

* Unbreakable Kimmy Schmidt – I really didn’t think I would be able to get Chris to watch this with me, and even he thought it was funny. So, consider that a ringing endorsement if I can get the dude who doesn’t watch sitcoms to watch a sitcom.

* Justified – We started watching this on Amazon Prime recently, and we’re about to start season 2. I think I like it? Some of it is a little gory, and there are some highly questionable Southern accents being thrown around, but it’s good. And Timothy Olyphant is… uh… not hard to look at.

* Game of Thrones – I’ll be honest, this is Chris’s show, not mine. I can’t cope with the extreme violence, so I hang out in the room while it’s on, but I usually play Candy Crush on my phone, so I have something else to look at during the gross parts. (I don’t do well with violence/gore. We only made it 2 episodes into the Walking Dead before I started having nightmares and had to stop. I’m a wuss.) So, I watch it, and I’m curious to know what’s going to happen next, but I’m also still like, “wait, who is that guy and how is he related?” Chris says my confusion at Game of Thrones character names is how he feels at my family reunions, which I guess is fair enough.

* The Americans – It’s SO GOOD. Season 3 just finished, and dang. It’s also got some really intense violence where I have to cover my face, but the characters are so complex and the storylines are fascinating, and it’s just. so. good. First 2 seasons are streaming on Amazon Prime. Go watch it, if you haven’t already.

* Better Call Saul – I wasn’t sure what to expect, but Chris and I both liked it a lot. Already can’t wait for season 2.

* Once Upon a Time – I really loved this show for a while, but it’s now in season 4 and starting to get a little ridiculous. A lot of the plotlines lately are wearing pretty thin. I think it was pretty clear they were running out of Disney storylines when they brought in Cruella DeVil as one of the villains. I’m not sure if/how they can turn it around, but for whatever reason, we’re still watching it. I guess I just want to see how it ends.

* The Flash – This is the show Catie and Chris watch together, while I go play with Lucy. I don’t get it, but they both love it, and I like that they have a “thing” they do together.

* Blacklist – I don’t even know why I put this on the list, we started season 1 on Netflix and gave up. It’s absurd. Every single episode has at least one moment where one of us says, “well, that’s dumb, nobody would ever do that.” It’s got Mike from “Homeland”! And the girl who played Jess in “Bend It Like Beckham”! And James freaking Spader! And it still sucks. Sorry, I can’t.

Anyway, not much else going on here. Trying to get outside and enjoy this spring weather as much as possible before it gets too unbearably hot. 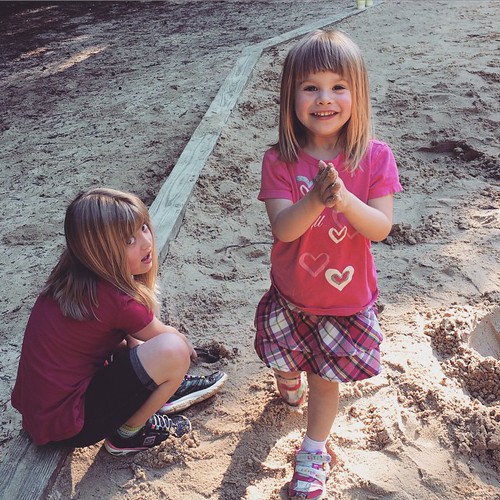 The kids don’t seem to mind too much either.