This past weekend, Chris and I drove to Atlanta for my cousin Cici’s wedding.

After the last two weddings we’ve gone to – my sister’s and my cousin Renee’s – I had decided that as much as I love my kids and enjoy hanging out with them, I really didn’t want to bring them to another family wedding unless I had to. I felt like I never got to have a real conversation with anyone because I always had one eye on the lookout for the girls, making sure they weren’t getting into any trouble. Either that, or Catie was whining she was hungry, Lucy needed someone to take her to the bathroom, that kind of thing. And we always had to leave early because the kids had to get to bed at a reasonable hour.

This time, I managed to trade off weekends with Dave, so he kept the girls with him for the weekend. I don’t think Chris and I have ever taken a road trip together, just the two of us, and it was really nice. We enjoy each other’s company a lot, so it was nice to just drive down on our own timeline, no major rush, and no worrying about nap schedules or potty breaks or anything. We got to Atlanta Friday night, checked into the hotel, and met up with some of my family. (My aunt and uncle hosted an informal get-together in their suite.) My family is made up of crazy loud talkers, but this time we had our first noise complaint from the hotel management by 9 p.m., which may be a record even for us.

My family is also large enough that we took up pretty much the entire floor of the hotel. Chris and I later joked that we couldn’t leave our room without bumping into one of my relatives – I went to the hotel gym on Saturday to work out, and I saw my sister and brother-in-law on the way there, and saw my cousin Renee on the way back. When Chris went to the hotel gym about an hour later, he ran into my dad. 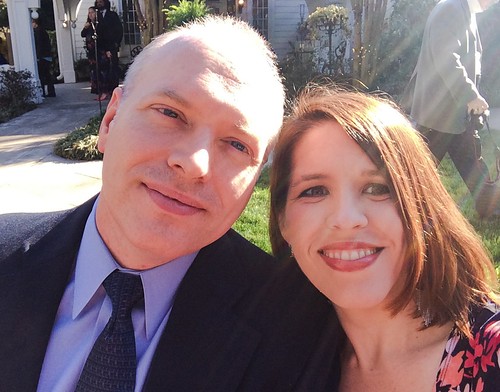 The wedding was on Saturday evening at an old plantation home in the northern suburbs of Atlanta. It was an unusually chilly day for late March in Georgia (high in the low 50s), but the ceremony was outside in the sunshine, and it was just perfect. My aunt Michele was the officiant, and they kept the ceremony short and sweet.

And you know, I never cry at weddings. But there was something about that, that was so sweet and touching, it really got to me. I know I was not the only one there who teared up.

The reception was inside the plantation home, and it was really beautiful. 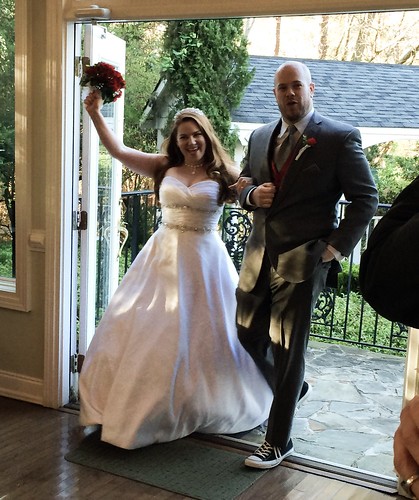 We danced, we ate, and I actually got to have conversations with people in my family, where I could focus on them and not worry about where my kids were at that particular moment. It was lovely.

After the reception was over, Cici and Chuck had planned to have people meet up at a restaurant across the street from the hotel where all of us were staying. Chris and I went, and I had way too much to drink (which isn’t actually a lot, I just don’t have much of a tolerance level since I almost never drink anymore). It was kind of odd to be drunk in front of my aunts and uncles, and realize that I’m now old enough that I don’t have to pretend to be sober in front of them. I’m not a teenager sneaking wine at a family reunion, they don’t really care how many vodka & cranberry juices I’ve had.

At some point that night, Chris took this picture of me with Cici and my cousin Ryan. 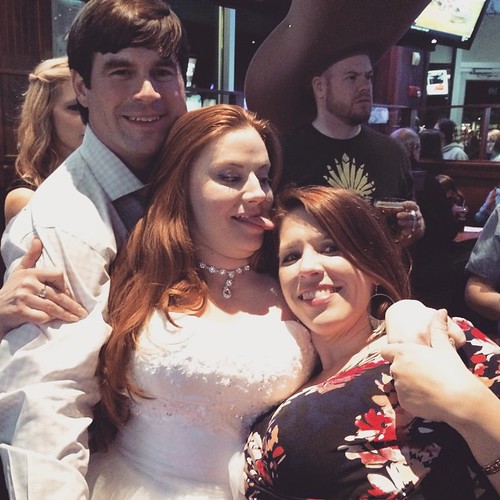 I don’t even know what exactly is going on there (note the groom in the giant cowboy hat in the background), but I think this sums up my family pretty well. Buncha goofballs, all of us.

Every time we have some event that gets all of my family together, I’m reminded how lucky I am to be related to these great people who I really enjoy, and I wish we all lived closer so we could see each other more often. This was another one of those occasions.

And I’m just so happy for Cici. Even though she totally threw me under the bus 15 years ago and told her dad that it was my idea for her to get a tattoo when she was 19. (Long story, but it WAS NOT my idea!) Even still, she deserves all the happiness in the world, and I’m so glad we got to be there for her.