Back in July or so, I got an email about Disney on Ice. I had taken Catie to see Toy Story on Ice about four years ago when I was pregnant with Lucy, and we loved it. They really put on a great show. This year’s Disney on Ice show was going to be – what else? – Frozen.

I mentioned it to my mom, and she said, “Here’s my credit card, go order the tickets, we’ve gotta go.” We decided we’d make it a girls’ night – me, the kids, and my mom.

The show was this past weekend, and Lucy was SO. EXCITED. We’d been talking about it for ages in advance. Catie was iffy about it – she’s tired of Frozen, but she also really loves to watch ice skaters. And the skaters at the Disney on Ice show are fantastic, and it’s even more exciting to watch them in person than on TV. So she agreed to come along with only a minimal amount of complaining.

(Seriously, the guy that plays Kristoff did a freaking backflip on the ice. TWICE. Those skaters are crazy talented.)

Lucy asked if she could wear her Elsa costume to the show, and I normally don’t let her wear the costume out of the house, but I figured this was one place where she was surely not going to be the only little girl dressed up like Elsa or Anna, so why not. And I’m really glad I let her, because nearly every other little girl in the place was dressed up like a character from the movie (we even saw some Olafs!). So if I had said no, she could’ve (justifiably) been mad at me for that for YEARS. (Catie was kind of the odd-girl-out in her dragon t-shirt and jeans, but she didn’t care.) 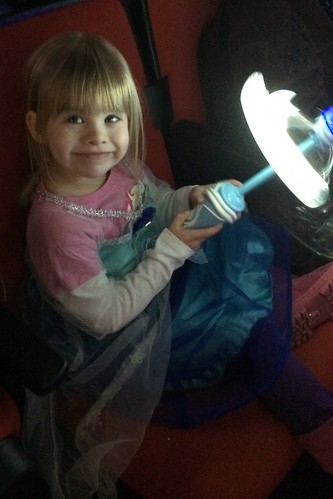 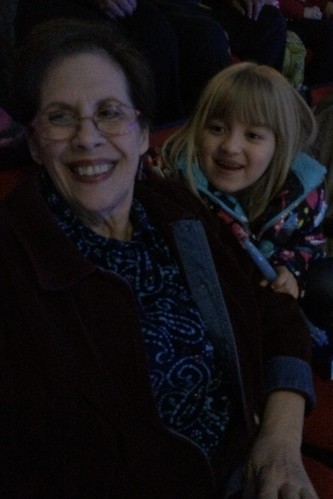 We got our souvenirs (a sword for Catie, an spinning light-up Elsa wand for Lucy) and our snacks, and settled in to watch the show. It really was great, the skaters are phenomenal, and they stay true to the movie, with just a couple of plot tweaks here and there to make it translate to a live show.

And when the skater who played Elsa came out to skate to “Let It Go”? My first thought was that it was basically the equivalent of a One Direction concert for preschoolers. It was insane. Every kid in there was singing at the top of their lungs.

Lucy at Frozen on Ice. You can kind of hear the other kids singing too. It was nuts.

Catie was sitting on the far side of my mom, but she was singing just as loud. She talks big about how she doesn’t like the movie, but she still enjoys the soundtrack quite a bit.

To sum up: It was loud, it was crowded, it was over-priced, and I’d do it all over again in a heartbeat to watch both of my girls have that much fun.

This morning Lucy was playing in the car with her Frozen action figures, and a Wonder Woman action figure that was mine way back in the 80s. (I swear, my mom saved some of the most random crap from my childhood.)

From the backseat, I hear her say, “Look, Anna is sitting on Wonder Woman’s face!”

I almost swerved off the road trying not to laugh. I don’t think that was an intended subplot of Frozen, and I’m pretty sure it was never in the Wonder Woman comic books either.

Not really related at all anecdote:

Last night, Catie made out Christmas wish lists for both herself and Lucy. (Guess what Lucy wants for Christmas? Pretty much everything to do with Frozen, including things that don’t even exist, like a Prince Hans doll. What the hell, Lucy, Hans is the villain! Nobody wants him!)

After Catie made out the lists, I made an offhand comment about sending them to Santa, and she said, accusingly, “Last year you didn’t, because I found mine still here after Christmas!”

Without missing a beat, I said, “Oh, that’s because I just took a picture of it and texted it to Santa.”

(Technically this isn’t a lie – I did take pictures of their lists, & I texted them to Dave, because that’s how we decide to divide them up and who’s going to buy what.)

Her: “How does his phone work at the North Pole?”

Me: “The best reception in the world is at the North Pole, because it’s the top of the earth. How else do you think he sends you those videos on the Internet every year?”

(I was referring to the Portable North Pole site, which if you haven’t ever used it for your kids, you should check it out because it’s fantastic.)

So, yeah, I basically blew her mind. I know I don’t have much longer for her to believe in Santa Claus and the Easter Bunny and all that stuff, but that little window of time where kids believe in magic is so short, and I just want to drag it out for as long as I can.

Completely unrelated to anything Disney or Frozen or Santa Claus:

Today is Chris’s birthday. I mentioned it to Catie last night, and she decided that she and Lucy would both make him cards. 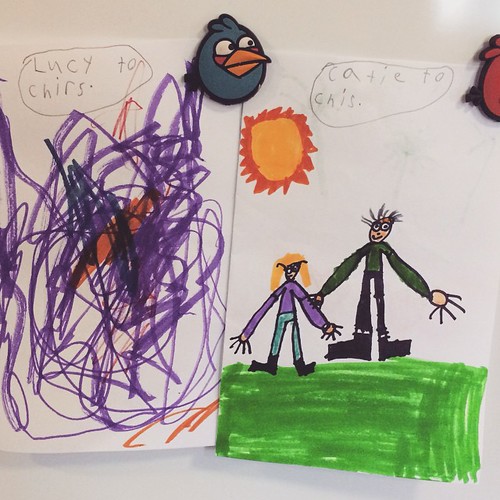 I like that Catie took it upon herself to label Lucy’s, so he’d know who did which card. As if it isn’t completely obvious.

And I love everything about Catie’s drawing – that she drew herself in her favorite outfit and wearing her glasses, and Chris wearing the outfit he had on yesterday. I love their disproportionately long arms, and that their fingers look like Wolverine claws. She was upset that she drew Chris’s hair too long (he does keep it buzzed really short), but she had drawn it in marker and couldn’t erase it. I think it’s fantastic.

Inside the card, she wrote (the spelling is all hers here):

Happy Berthday!
We hope you had a good year and we hope you hav a good next year to.
By your frend Catie

The words are all surrounded by hearts. It’s adorable, and damned if I didn’t tear up a tiny bit when I read it.

Now I’ve just got to figure out dinner plans for the birthday guy.

Yes, the title is from the “Frozen Heart” song that the ice miners sing at the beginning of the movie. It’s been in my head all day.

5 thoughts on “ice has a magic can’t be controlled”