It seems like I have an annual tradition of coming down with some terrible sinus infection right around Christmas. This year was no exception, and I almost completely lost my voice for a few days, but silver lining: it was better than the flu I had 2 years ago! That’s a weird way to frame it, I know. Sure, I felt terrible, but it wasn’t as bad as the time I ended up in the ER on Christmas Day. Call it a win!

Other than that, Christmas was really nice and low-key this year. My sister and brother-in-law flew in from Texas a few days before Christmas, and the girls loved getting to hang out with them. Tracy is basically Catie’s favorite person on earth – always has been – so she was particularly stoked to have them here. 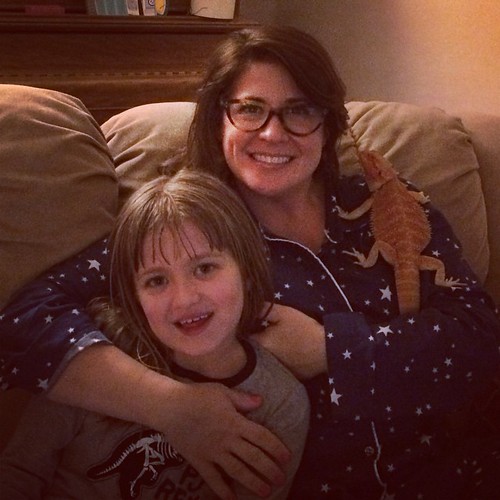 And my sister impressed me by not being at all squeamish about Catie’s bearded dragon. (You never really know how people will react to reptiles, it’s not like something cute and furry.)

A couple of days before Christmas, Lucy decided she wanted to see Santa at the mall, like she did last year. Catie insisted we drop her off at my parents’ house first, because she wanted nothing to do with Mall Santa. So it was just Lucy again this year, and she insisted she needed to “wear a fancy dress” to meet Santa. So… she picked her Anna costume. And you know, I kind of just shrugged it off and decided that at the very least, it’d make a cute picture for when she’s older.

This year, she wasn’t quite as brave about meeting Santa, and she kind of hid behind me when we walked up to him. So I sat down next to Santa, and pulled her up into my lap. 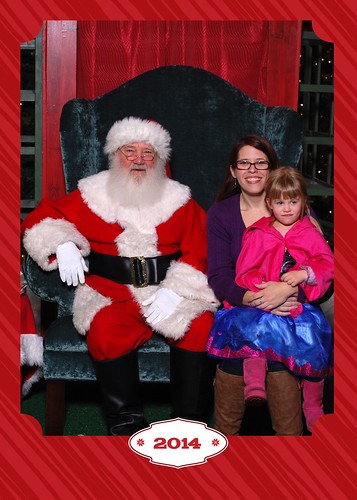 That’s about the best picture we got.

Christmas Eve was probably one of the more stressful days for me, because that’s when we do our big family meal, and I did most of the cooking, which is no small feat when you’re feeding ten people. We ate, then went to church. And let me say, hooray for our church’s special “child friendly” service – it didn’t matter that Lucy was squirmy and kept asking where the real “baby Jeegus” was, because there were a few dozen other kids in the congregation doing the same thing. It was nice to not have to worry about my kid ruining anyone’s spiritual experience.

After church, we went back to my parents’ house to open family gifts. It’s funny how that changes when you’re a kid versus when you’re an adult. As a kid, it’s all about getting presents. But now, I’m more excited about watching other people open the gifts I got for them than I get about opening my own.

Chris and I are not big “surprise” gift people – I pretty much told him exactly what I wanted, and he got it. And I got him the things he wanted. I did manage to sneak in one little surprise gift for him, though. Since he wears a lot of random t-shirts when he runs, I got him a Los Pollos Hermanos t-shirt. (If you’ve watched Breaking Bad, you’ll get the reference.) He thought it was funny, and I think my dad (who’s a huge Breaking Bad fan) was actually a little jealous of it. But my dad doesn’t wear t-shirts, and they don’t seem to make Los Pollos Hermanos golf shirts, so he was out of luck.

And as much as my kids loved their Christmas Eve presents (Lucy got Frozen slippers! Catie got a Zoomer Dino!), Christmas Eve is the only night of the year that my kids beg to go home from my parents’ house because they can’t wait to get to bed so Santa Claus can come. 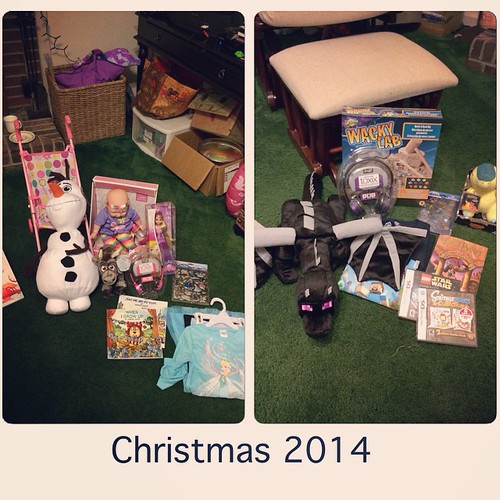 It really does crack me up how different my girls are. Everything on Catie’s wish list was related to Minecraft or some other video game or science stuff. Everything on Lucy’s list was princesses and baby dolls.

Christmas morning, they had a blast checking out their loot. 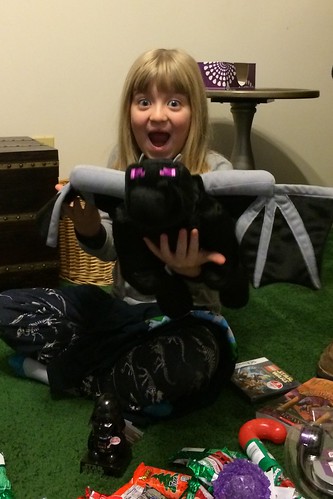 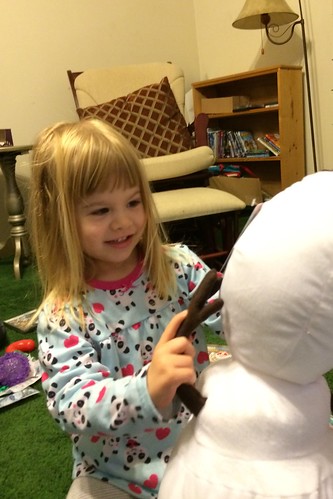 My parents, as well as my brother and his girlfriend, had come over to my house super-early so they’d all be here when the kids woke up. I guess because they’re the only two grandchildren, Christmas morning is a really big deal for my family.

Chris and I made breakfast for everyone while the kids went crazy with their new stuff. My sister and brother-in-law flew out later that morning (they were going to visit my BIL’s nieces and nephews), and I dropped the girls off with Dave, so they could have Round 2 of Santa Claus with him. Later that day, Chris left to visit with his kids for a while.

It was weird, how quiet the house was after everyone had left. I took a lovely two-hour nap, then went for a long run. It was a beautiful day (sunny, highs in the mid-50s), and my neighborhood greenway was more crowded than I’ve ever seen it. Kids riding their brand new bikes, and families out walking together. I guess you hit that point late in the day on Christmas when you start to get a little stir crazy and need to get out of the house. But it was nice, because everyone was smiling and saying “merry Christmas” to each other. I don’t think I’ve ever smiled that much during a run. It was pretty great.

This week, I’m doing something I don’t think I’ve ever done in the four years I’ve worked at my company: I’m taking this whole week off (I have plenty of vacation days accrued, since I almost never use them), and I’m keeping the girls home with me. Daycare is open, but it’s nice to just have some lazy days with no plans. Like today, the kids haven’t gotten out of their pajamas all day. They’re in a phase where they mostly play really nicely together, and I only have to break up a minimal number of fights, so it’s been really easy and nice.

Hope you all had lovely holidays as well.