Here’s the thing about 2 year-olds: if you make a promise, you’d damn well better stick to it if you ever want to hear the end of it. We’d been promising Catie ever since we got to Scotland that we were going to take her to the beach. Friday rolled around, and it was our last day at the cottages, so… well, off to the beach we went, even though it was ridiculously cold outside. We managed to get to the beach during a brief dry interval, in between rain storms. Of course, dry does not necessarily equal warm. Because believe me, it was effing FREEZING out there. Tip: If you see me standing like this, it means I’m really, really cold. Or I need to pee. One of those two things. Quite possibly the best picture I’ve ever taken in my life.

See those black clouds on the horizon? They moved in a lot faster than we expected. We were only there for maybe 15 minutes before we got caught in the freezing, pouring rain and had to run as fast as we could back to the car.

Still, that might be one of the most fun experiences we’ve had yet here. Catie had so much fun running around on the beach, picking up seashells and throwing them back into the surf. She cried when we left, even though it was pouring rain on us. I promised her that we’ll try to take her to the beach next week when we’re in Yorkshire, visiting Dave’s dad & stepmom. I have to say, Catie has been amazing on this trip. We’ve asked an awful lot of her with all of this traveling and driving. We’re never in the same place for more than 3 days, and we’ve driven hundreds of miles since we got here. The poor kid’s entire routine has been shot to hell. And overall, she’s doing fantastically well. She’s had a couple of meltdowns here & there, sure, but mostly she’s been completely sweet and delightful and fun. And sure, it helps that she’s got the undivided attention of four adults. I think I’m just amazed because I always talk about how she doesn’t adapt to new situations quickly. And clearly, this little girl of mine is just full of surprises.

On Tuesday, we left Carlisle (Dave’s hometown) for Scotland. I knew that we were in Northern England – whenever anyone asks Dave where he’s from, he always says that Carlisle is “up near the Scotland border.” However, I didn’t realize that we were literally 7 miles from the Scotland border. So we were in the car for 10 minutes and oh hey, welcome to Scotland! Which, wha? We just entered a new country like that? It’s odd because it’s all part of the UK, but Scotland is definitely its own country. Even the light is different here. I’ve never seen so many rainbows during the course of a single road trip in my entire life.

We drove up through Glasgow to Inverness, and then on to a tiny seaside town called Nairn. It was dark by the time we got there, so we stopped for the night at a hotel.

The next morning, since we were in the area and I have yet to do a single touristy thing since arriving here, we stopped at the Culloden Battlefield. It’s odd that even though the battle happened in 1746, if you walk around the place, it’s sort of creepy, and you get the vibe that something really awful happened there. Maybe it’s just the nature of Scottish moors, but the whole area just feels very sad. 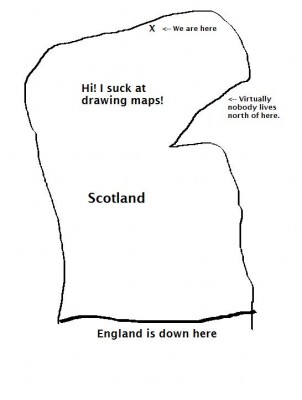 The last 40-50 miles of road up to the cottages is literally a single lane road. There are places along the way where one side of the road will have a wide shoulder, so if you encounter a car trying to come the other way, you have to pull over and let them pass (or vice versa). That was… well, it sucked, quite honestly. It made the trip twice as long, and made us all twice as carsick, with all the stopping and going. We’ve been here less than 24 hours and I’m already dreading the trip back to Carlisle on Saturday.

The cottages themselves are fantastic. Dave’s family owns two cottages that are next door to each other. So we’re staying in one, while Mags and Roger (Dave’s mom and her partner) are staying in the other. We opted for the newer cottage, based solely on the fact that it’s on one floor, and it has a bathtub. The other cottage is probably the nicer one in its old-timey cottage-style charm, but the loft bedroom is accessed via a metal spiral staircase and there’s only a shower stall. Neither of those features seemed particularly toddler-friendly, so we chose this place instead.

(Note: this is where I’d insert pretty pictures of the scenery for y’all to see, if only Flickr wasn’t being a pain in the you-know-what.)

I’ve promised to take Catie for a walk on the beach to look for seashells later – we even packed her galoshes for the occasion. If this cottage had Internet access, I could probably be happy staying here for a while. But I don’t do well with feeling cut off from the rest of the world. I cannot imagine what it’s like for the people who live here.

I have never been this far north in my entire life. It’s worse than Seattle in winter, sunset is a little before 3:30 in the afternoon. My mother-in-law says that around the time of the summer solstice in June, there’s sunlight for 24 hours straight. It’s insane. I told Dave I can’t look at the ocean behind our back door, and wrap my head around the notion that it’s the same Atlantic that we swam in a few months ago, on our trip to Wilmington, NC. It’s completely surreal. It feels like we’re on another planet here.

But, you know, at least it’s a really beautiful planet.

(Note: I wrote this post 2 days ago, on Thursday. I’m only just now getting around to publishing it because that’s how long it took me to find a reliable wifi signal.)