Today is my mom’s 70th birthday, one of those big milestone ages. Last night, I cooked dinner and we had birthday brownies afterward. 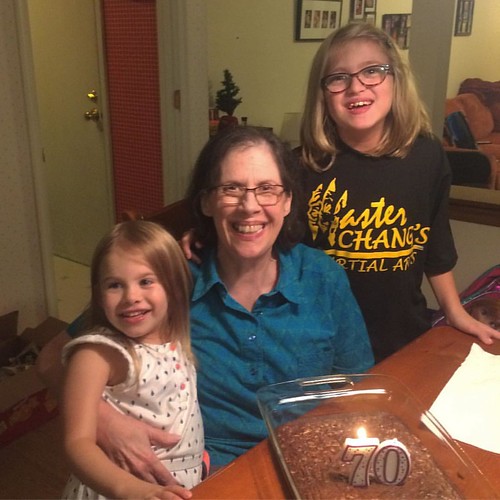 My relationship with my parents is complicated, but for the most part, my mom and I have always been close. I know I went through a few years where I was an insufferable brat, like most teenage girls do (I think it peaked around ages 14-16 for me), and my mom deserves major credit for not murdering me at the time. But post-“Teenage Brat” years, I genuinely enjoy being around my mom, and I know I’m very lucky in that regard. I have a lot of friends with crappy moms, and I definitely lucked out with mine.

I will say, my parents living nearby has been a mixed bag. They help out so much, and save my butt with childcare all the time – just last night, after that picture was taken, I took Catie to her taekwondo class, and my parents took Lucy to their house to hang out, so she wouldn’t be bored sitting through Catie’s class. And sure, I could’ve left Lucy with Chris, or asked Dave to keep her, and that would’ve been fine, but Lucy loves getting her Mimi and Pop-Pop all to herself. I love that both of my girls get to be close to their grandparents as they grow up. Those are such important relationships, and I feel so fortunate in that regard. But my parents being local also means they unload on me more than they do on my siblings. Which is nobody’s fault, it’s just geography: my sister is in Texas, my brother is in Utah, and I’m a mile and a half away. They see me at least twice a week, so they’re more likely to nitpick with me about little things, and I hear about their squabbles (which are more frequent in an election year).

Both of my parents watch a lot of true crime shows, like Dateline and 48 Hours, and it makes them worry a lot more than they should. Chris and I joke that one of my mom’s catchphrases is “people have died!”

It goes on and on. We now use it as an inside joke for minor little things. “Better fold the laundry before it gets out of hand. People have died!”

Which is not to say that it’s all ridiculous, because it’s not. Some of the stuff my mom worries about is valid – like she worries about online predators with the kids. And hey, I worry about that too, but this is why I’ve already got a long list of rules: they’re not allowed to have any passwords on their devices that I don’t know, their iPads are configured so they can’t install any apps without my password, I won’t allow any social media until they’re teenagers, and they know that they can expect zero privacy because I can and will check up on what they do online. At this point, the closest thing to social media that Catie has is Google Hangouts, which she uses to chat with her cousins and a couple of friends from school. And she knows that I regularly check to make sure she and her friends aren’t talking about anything inappropriate. (They aren’t. They mostly talk about Minecraft.) So maybe I get the worrywart gene from my mom, because when it comes to my own kids, I tend to be a little overly cautious like she is.

For many years, I never saw my parents on their birthdays (and they didn’t see me on mine), because we didn’t live in the same area. They were in Mississippi, and I was in Memphis in college, then I moved to Wisconsin, Massachusetts, Washington, and eventually North Carolina. But I’ve gotten to spend their birthdays with them (and vice versa) every year for the last five years. It started in 2011, after Dave and I split up, when my mom moved in with me for four months while I sold my house and found a new one, and my dad sold their house in Mississippi and got ready to move.

Sometimes it strikes me just how huge that was. They lived in Mississippi for 40 years, from 1971 to 2011. Their entire lives, all their friends, all their routines – they gave it all up for me and Catie and Lucy. So yes, there are a lot of ways that my mom and I differ in our parenting styles, and I sometimes complain that she nitpicks about silly things. But I hope that if 30 years from now, one of my girls is having her life fall to pieces in front of her eyes, she knows she can call me and I will drop everything to be there for her without hesitation. Even if that’s the only thing about my mom that I emulate, I’ll consider myself to have been a damn good parent.

Happy 70th birthday, Mom. I love you. And your grandbabies think you’re pretty fantastic too.

One thought on “for Mimi”