Apparently blogging is something I only do every couple of months now. I’m not sure why, it’s just hard to think of stuff I want to write.

So hey, let’s talk about October! Catie was out of school for the first three weeks of October, so I tried to take advantage of it and maximize the amount of fun stuff we did. Pardon me while I post a zillion photos now.

On a random Wednesday when the weather was nice, I took a vacation day, and we went to the zoo. (My manager was also on vacation that week, so the timing worked out well.) Chris couldn’t take the day off work, but my parents came along, and I’m so glad they did, because I think it was a lot of fun for all of us. 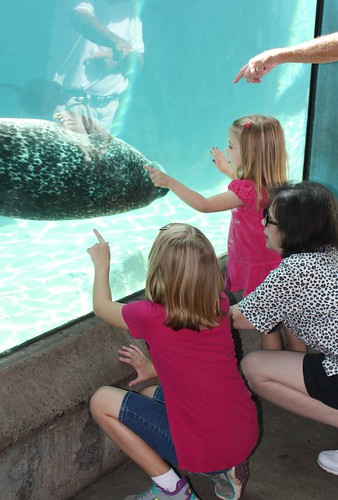 The NC Zoo is BIG and involves a lot of walking, and I knew my mom would have trouble getting around. She has scoliosis, arthritis, and a lot of other health issues that cause her chronic pain. The zoo rents out mobility scooters, and at first she didn’t want to get one, but she finally relented. (Mom: “That would be embarrassing!” Me: “Who gives a crap what anyone at the zoo thinks about you?”) About halfway through the day, she said she was so glad she got the scooter, because otherwise there was no way she would’ve been able to keep up with us.

(My dad is 10 years older than my mom, but since he’s been a golfer all his life, walking is no issue for him. He trekked all over the zoo with us without any issue.)

We happened to make it to the zoo while the dinosaur exhibit was still out. We saw it on our last trip to the zoo (which I realize after going through the archives was THREE years ago! Lucy could barely walk & was still drinking out of a bottle! We need to get to the zoo more often), but they’ve improved the dino exhibit since the last time we were there.

And it led to this picture of Catie, which I think might be the most perfect Catie picture of all time. 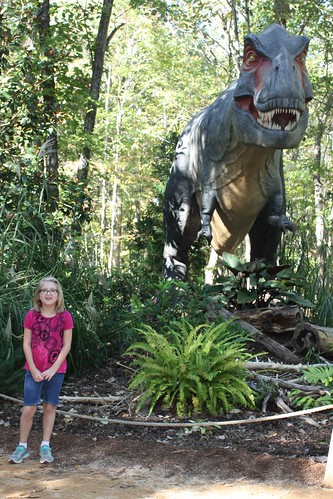 We also went to Green Acres Farm, where we went on a hay ride, and the girls generally ran around like maniacs for a couple of hours, and made friends with animals. 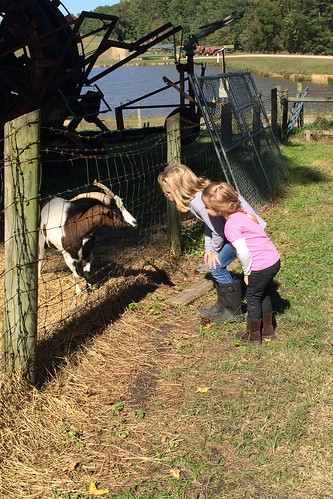 Chris said later how strange that trip was for him, because he grew up on a farm, and he didn’t understand why people would pay money to visit one. He said, “I joined the Army to get away from that.” I tried to explain that it’s a novel concept to kids from the suburbs, he just shook his head and laughed.

Also in October, the NC state fair comes to town. I hate going to the state fair on weekends, because the crowds are insane, and the kids spend more time standing in line to go on rides than actually going on rides. So instead, I took off a few hours early one weekday (can I say again how much I love my job and how grateful I am for my flexible schedule?), and we went. 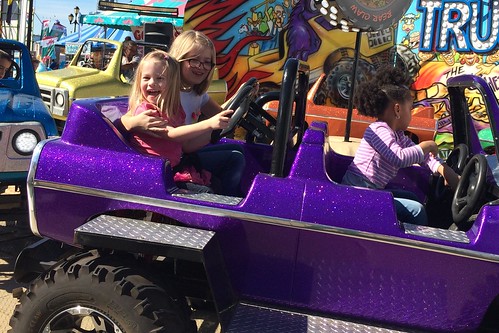 Catie is still a little bit of a chicken about rides, and generally only wants to go on the little kid rides. Which is FINE, I have no need for either of my kids to be a daredevil, I’m already prone to anxiety attacks as it is. And there are some rides at the state fair that scare me just to look at them. So the fact that Catie doesn’t want to ride the big scary rides is A-OK with me. Instead, she rode the kiddie rides with Lucy, they were both happy, and I didn’t need to take any sedatives. Win-win-win. 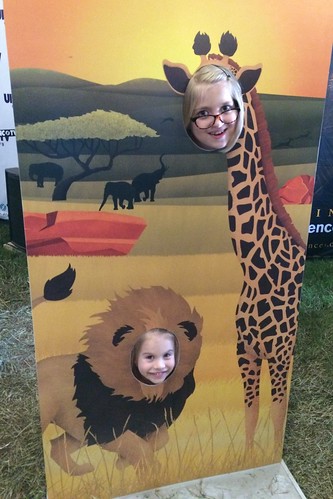 Random photo from the state fair that has nothing to do with anything, it just makes me laugh.

Last thing for October: Halloween! As per our usual tradition, we went to my parents’ neighborhood for trick-or-treating, because the lots in their neighborhood are a little smaller, which means the houses are closer together, so they can get a bunch of candy in a shorter amount of time. And there are tons of kids in their neighborhood, so Halloween ends up like a mini-street party, and it’s a great time.

This year, Catie was Spyro from the Skylanders game, and Lucy decided that since she was Elsa last year, this year she would be Anna. (If you thought she’d outgrow her Frozen obsession anytime soon, you’d be wrong.) 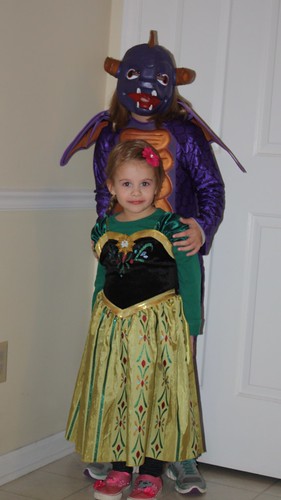 One nice thing: I didn’t have to buy any costumes for Halloween this year. Catie got that Spyro costume back in March when we went to Comic-Con, and she’s grown so much in the last 6 months that it *barely* fits her now. The Velcro in the back kept popping open like she was the Incredible Hulk ripping her way out of her clothes. And Lucy got the Anna costume months ago as part of a potty-training bribe. It was nice to have a holiday where I didn’t have to drop any money.

Overall, October was an A+ month. Now Catie is back in school and we’re back to our typical daily routine, and there aren’t a ton of fun events in November. But I’m pretty good at coming up with fun stuff for them to do on my weekends, so I’m sure we’ll figure out something.