The last time I got a cut and color was close to six months ago. I’ve been long overdue for a while, and lately I’ve been really itching for a big change. I texted my hairdresser, Kim (who’s also a friend of mine), and set up an appointment.

In the past, when I’ve mentioned making major changes to my hair, Kim usually advises against it. And since she always makes my hair look great, I usually defer to her advice. This time, I was planning my argument in advance: my face has gotten less round/more oval with the weight I’ve lost, and I feel like the long hair is sort of dragging it down and making it look even longer.

Instead, as soon as I walked in, she looked at me for a minute and said, “So! How adventurous do you feel today?”

And this is why I love her: she gets me. 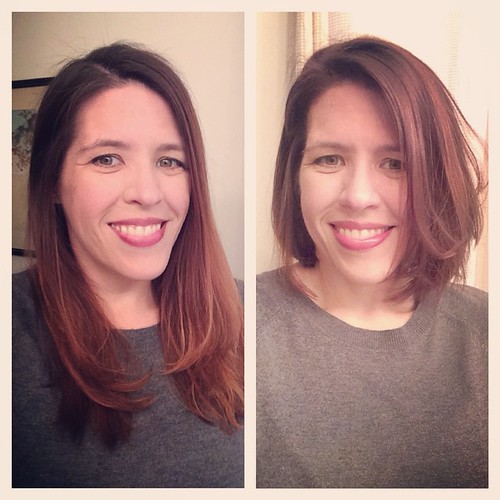 The before and after shot.

She also re-did the color, with a few dark red panels underneath that only peek out if I’m in the sunlight. Nothing too severe or crazy, but enough that I felt like I got a major change (at least by my relatively tame standards).

I’ve gotten lots of compliments on it already, and Chris loves it. Funny story: way back when we first met, I remember that his dating profile said something about how he liked girls with short hair, and I kind of joked that if that was the case, I clearly wasn’t his type. Yesterday, I had told him that I was going to get a haircut, but I didn’t tell him how much I was taking off (I would normally just trim maybe a 1/2 inch), so this was kind of a surprise. And based on the way he couldn’t stop touching my neck last night, I’m going to venture a guess that he seems to be a big fan.

As for the kids, Catie said she liked it. Lucy gave me the backhanded non-compliment with, “Wow, Mommy, your hair sure is… different!” Um, thanks? But, you know, this is a child who says she wants “long hair like Rapunzel,” so I’m probably not taking my fashion cues from the three year-old.

This week has been insane, weather wise. The schools let out early on Monday because of snow in the forecast, and they’ve been closed all week because of icy road conditions. 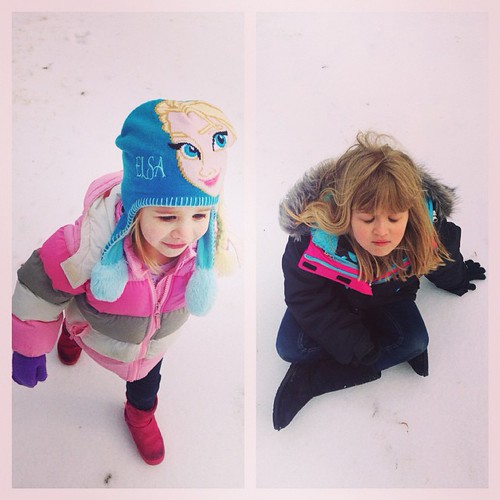 The girls liked the snow the first day. After that, they were just kind of over it. (JUST LIKE THE REST OF US.)

And really, I’m incredibly lucky because our daycare has been open a lot of the time that the schools have been closed, and even when they closed early (during the worst of the weather), my parents helped out, Chris has helped out, and Dave and I have managed to divide up the time with the kids, so we’re both able to meet our deadlines and not go crazy. 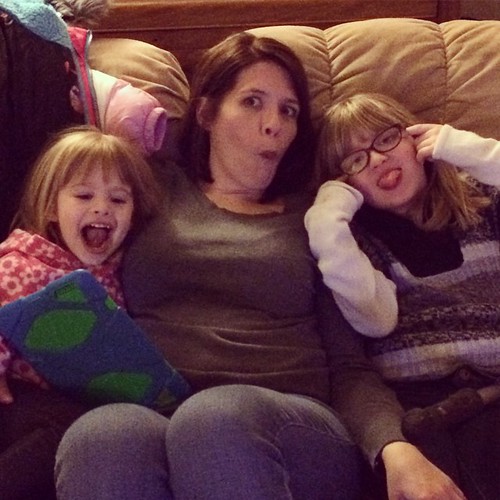 It’s been a stressful wrench thrown into our routine, but we’ve gotten through it fairly easily. I don’t know how other families with less of a support system manage when these things happen.

Really, though? I mainly want the snow to melt so I can get back to running without worrying about slipping on ice. And yes, I know that by comparison to other parts of the country, the amount of snow and ice we’ve gotten here is nothing. (Sorry, people of Massachusetts, but there’s a reason I only lived there for a year, and then moved at the first opportunity. Southern girls don’t do snow.)

And I also know that in another 3 or 4 months, I’ll be complaining about how hot it is when I run. The thing is, I don’t really mind the cold all that much, I can bundle up and still run. It’s just the ice. The cold weather can stick around as long as it wants, as long as the sidewalks and greenways are clear.

Oh well. I’ll stop whining now, go lace up my sneakers, and fire up my tablet so I can watch a movie on Netflix while I run on the treadmill. There are worse things in life, I know.