Last week, Chris and I bundled up ourselves and the girls, and met up with my cousin and her family, then piled all eight of us into an SUV (God bless third row seats) and went to First Night, an event here where they do a New Year’s countdown and set off fireworks at 7 p.m., so the kids can get home and get to bed on time. (Well, sort of. Better than keeping them up until midnight, anyway.) 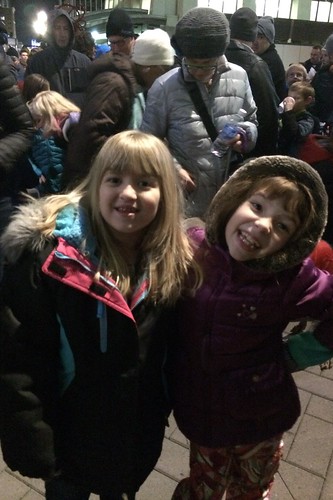 Catie and her cousin Elizabeth could not be more different, and they are crazy about each other. They walk down the street holding hands and it is the cutest thing.

And it’s funny that Catie is taller than Elizabeth, since the first time they met, they looked like this: 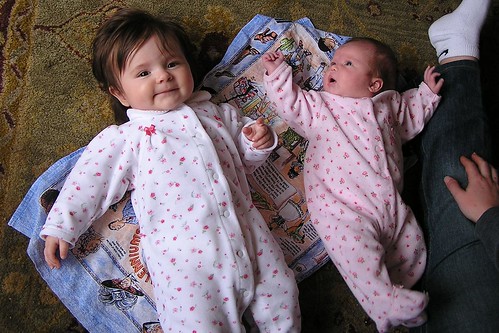 That 4-month age difference ends up as a wash sooner than later.

I tried to get a selfie with Chris, but Lucy wouldn’t allow him to set her down, and she wouldn’t smile for the camera, so… yeah. 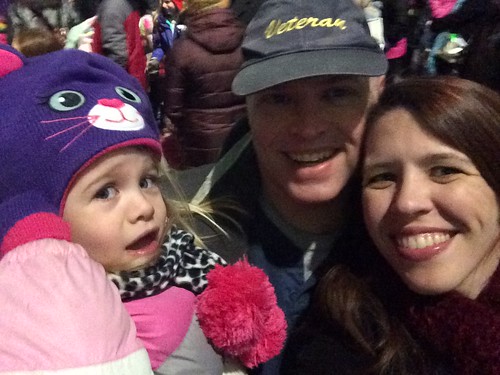 Chris couldn’t find his regular knit cap, but it was super-cold, so he grabbed this hat that said “Veteran” on it. (He was in the Army for a while, but he can’t remember where the hat came from.) We joked that he looked like he belonged at an RNC convention with that hat, it doesn’t really fit his style at all.

Last year, after the fireworks, we stopped for Krispy Kreme donuts. This year, we decided that should become part of our annual tradition. The big kids went to watch the assembly line of donuts being made (it’s kind of cool how you can watch them on a giant conveyor belt), and Lucy and I snagged the first free table while the other grown-ups waited in line for donuts.

Lucy and I passed the time by goofing around with my phone. 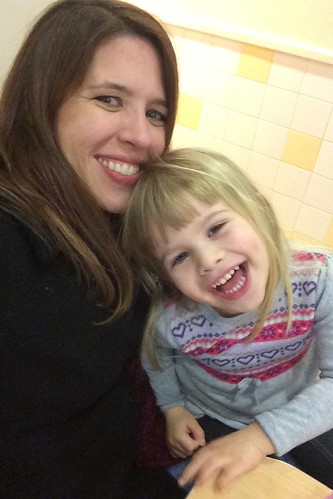 New Year’s Eve was supposed to be Dave’s night to have the kids, but he had no interest in doing the First Night stuff (he’s not a fan of big crowds). Instead, I dropped them off at his place afterward, then Chris and I went home, got in our PJs, snuggled up on the couch and watched the midnight countdown on TV. It was quiet and lovely.

This week, I’ve started back to work, but Catie is still out of school for the next three weeks for her winter break. (Lucy is back at daycare, I think she missed her friends during the two weeks she was out.) Catie didn’t want to go to her regular daycare this time; she’s one of the oldest kids there, and I think she’s gotten bored with it. She’s old enough that she could theoretically stay home with me, because she’s pretty self-sufficient and doesn’t get underfoot too much while I’m working, but she’d be bored out of her mind.

Catie and my cousin Cat’s kids are both on the same year-round school schedule, and it just so happens that my aunt and uncle come up from Texas to help out with Cat’s kids (their grandkids) on track-out breaks. My aunt Susie said she’d be happy to take Catie too, so this week, I’ve been taking her over to their house in the mornings, and she’s been getting to play with her cousins all day. She’s had a blast, and she comes home happy and exhausted.

My aunt has even been getting Catie to eat foods that she normally never touches, like peanut butter and jelly sandwiches. I’m not sure if she has some kind of voodoo mind power or what, but it’s fantastic. Not to mention that it’s saved me a ton of money that I haven’t had to pay for childcare, so I’m going to call that one a win all around.

So, hooray for having awesome family members who help out! It’s really great to have that support system when you need it. 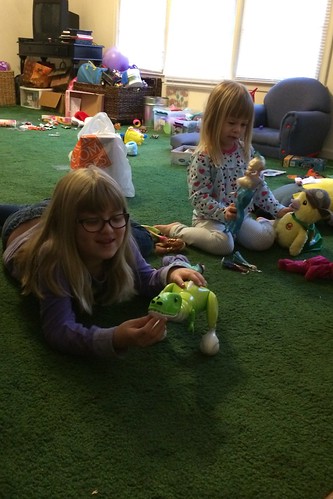 No reason for posting this, I just think it’s funny. Mainly because of Lucy’s face in the background as Elsa has a very serious talk with Ming-Ming from the Wonder Pets. And Catie is in love with that Zoomer Dino she got for Christmas.