I registered for a half-marathon. I’m kind of back and forth between super-excited and also completely terrified, because I have literally never done any kind of official race at all. Like, not even a 5K. And it’s not even about trying to compete with other people for me, because I know I’m an “average at best and actually pretty slow” runner. It’s more that I just want to prove to myself that I can do it — that I am capable of running 13.1 miles — if that makes sense.

The Betty Rocker workout challenge in October definitely helped boost me a lot, and I’m still using her workouts a couple days a week for strength training. I’ve also lost about 6 pounds since October 1st, which wasn’t something I was actively working on, but you won’t hear me complain about it.

In related news: all of my disposable income is now being spent at sporting goods stores (I need workout clothes so I can run through the winter months), which is further proof of how we change as we get older, and how 20-something me wouldn’t even recognize 38 year-old me.

(Oh, the race is next spring, after my birthday. So I’ll be 39 when I run my first half-marathon. That’s… probably not something normal people do, I’m guessing.)

I will try not to talk about it too much because blah blah blah nobody cares about my workout regimen. But it’s kind of A Big Thing that’s on my mind right now.

(Added because it’s one of my favorite GIFs of all time.)

I don’t talk about it much here, but my job has been so good lately. I changed managers a few months ago, when my manager moved to a different team (I can’t remember if I ever blogged about that or not). I was initially really nervous about it, because my new manager is a guy that I’ve worked with for the entire four years that I’ve been at this company, but I could never figure out whether or not he liked me. But the transition has been very easy, and we have a really great working relationship now.

Last month, I had my first performance review since changing managers, and I got some really great feedback, as well as a raise. I feel like I’m insanely fortunate to have a job that I enjoy, and get to work with people I really like.

Work has also gotten a lot busier recently, which is part of the reason the blog has been so quiet lately. But it’s all good stuff there.

Oh, and I got more pictures back from our family picture day, and I just… my god, I don’t know how I got so lucky to have these two beautiful little girls.

They’re so different, and so much alike. They are each their own individual little people, and they are delightful.

The other day, I thought about how when I was pregnant with Catie, and we first found out she was a girl, I was terrified, because I didn’t know if I’d be a good mom for a girl. I’m not a super girly-girl type, and I have so many body image issues of my own that I was afraid I’d project onto a little girl, and I just thought I’d be terrible at it.

(Funny thing: it was the opposite when I was pregnant with Lucy. By that point, I was scared of having a boy, because having a girl was all I knew. That time, I was relieved to find out we were having another girl. I was like, “oh, another one of these? Ok yeah, I got this.”)

I think Catie and Lucy are proof that we get the kids we’re supposed to have. Because they’ve expanded my horizons and my worldview so much, and the fact that I can now have extensive conversations about both dinosaur fossils and Disney princesses without batting an eye? I think that just makes me a more well-rounded person than I was before I had kids. 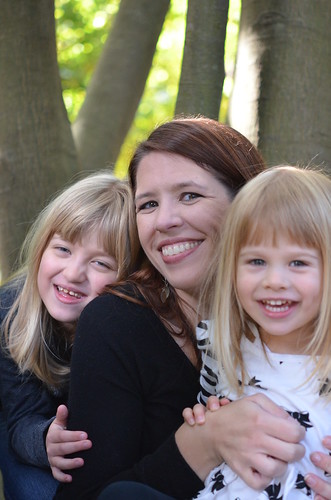 Oh, this guy of mine is pretty great, too. 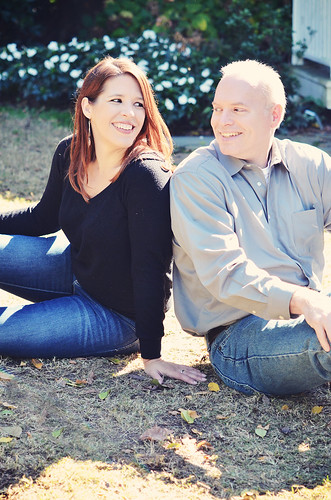 (Side note: that picture was so awkward to take — “look over our shoulders at each other, say what now?” — but I really love the way it turned out.)

And now, if you’ll excuse me, I have to get back to reading online reviews of running shoes, because apparently that’s the type of thing I do with my free time now. Yeah, I’m a weirdo. I know.