I had a Twitter conversation with Gwen yesterday (who I don’t think has a blog anymore, and her Twitter account is locked, so I can’t link to her, but hi, Gwen!) about the people who I call Chronic One-Uppers. These are the people who, no matter what you’re doing with your life, they have to top it somehow. They make themselves feel superior by minimizing you.

Chronic One-Uppers exist in all facets of life – in school, at work, at the gym, in your social circles – but Chronic One-Uppers as parents? Are some of the most annoying people to be around. There are several different variations on this, from the Sanctimommy types (“you let your kids eat French fries? My children only eat raw organic vegetables that I’ve grown myself!”) to the My Child is More Advanced than Yours parents (“oh, your baby is 8 months old and not crawling yet? My baby crawled at 6 months!”), but the ones who I find the most intolerable of all are the “just wait!” parents.

(This is where I scrambled to try to find Temerity Jane’s post on this subject, but alas, Google has failed me.)

The “just wait!” parents are the people who take great delight in telling you how hard parenting will be further down the road than wherever you currently are.

It starts when you’re pregnant.
“Enjoy sleeping now! Once the baby comes, you won’t sleep again for years!”

[Side note to pregnant ladies or those who may become pregnant someday: this is a load of crap. First of all, sleep isn’t a savings account that you can store up and withdraw later. Second, trying to sleep when you’re hugely pregnant is miserable. You need a million pillows to support your body, and if you have to roll over, it’s a whole production of moving said pillows, and also you have to get up to pee every 20 minutes. When you have a newborn, yeah, ok, babies wake you up a lot, but when you get the chance to sleep, you can sleep however you want (on your stomach! On a couch! On the FLOOR if you want to!), and you may have the option of letting your spouse take a shift to give you a break. Your spouse cannot, however, take on your giant belly and sciatic pain to let you get a good night’s sleep when you’re pregnant. So those “sleep while you can!” people are liars, and you should either ignore them or kick them squarely in the shin.]

Then when you have a baby.
“Just wait until you hit the terrible twos!”

Oh, your kid is now a two year-old?
“Oh, three is so much worse than two, just wait, you’ll see!”

When you have a kid in grade school?
“Just wait until they’re teenagers!”

It never ends. There’s always something.

The thing is, no matter what phase you’re in, there’s some hard stuff, sure, but there’s also good stuff.

For example, when you have a newborn? Sure, you’re exhausted and you feel like you’ve been run over by a Mack truck full of hormones, but you also have this amazing little person who’s suddenly been thrust into your life. Which is pretty fantastic in and of itself.

From my point of view: I have a 3 year-old. And it’s pretty widely acknowledged that three year-olds are terrible and difficult, and basically irrational tiny dictators. And while that’s true, I also get unsolicited hugs and “I love you, Mommy”s, which are pretty much the greatest thing in the world. 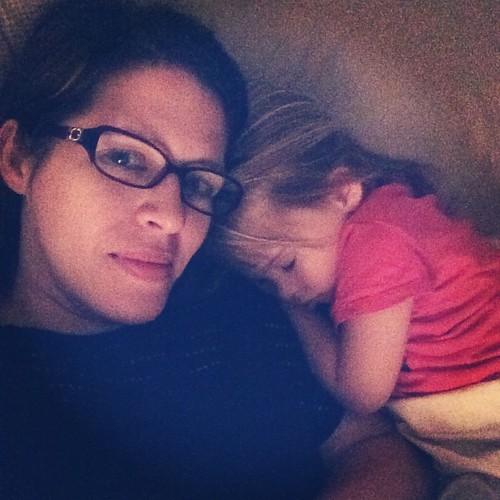 The snuggles are pretty nice, too.

And when she’s not acting like a threenager, Lucy is hilarious.

She is the stereotypical second child, a total ham, and she has a way of expressing herself that keeps us laughing all the time. (At least as long as she’s happy. When it’s tantrum time, LOOK OUT.) 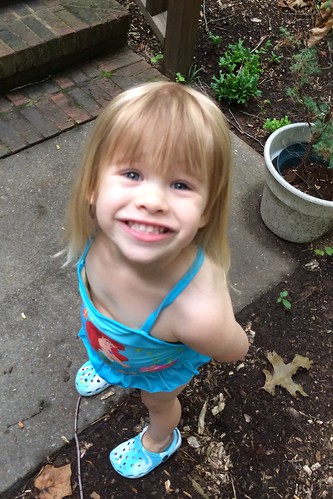 With Catie, at seven years old? Sure, there are times she throws a bad attitude around. I know that right now she’s practicing for the tween years, and testing my boundaries and trying to see how far she can push me. But at the same time, since she’s seven, I can talk to her like a normal person, and she understands. I can take her places and she acts like a civilized person. We can go to a restaurant, just the two of us, sit and have a conversation, and eat our food together, and she’s just completely delightful to be around. 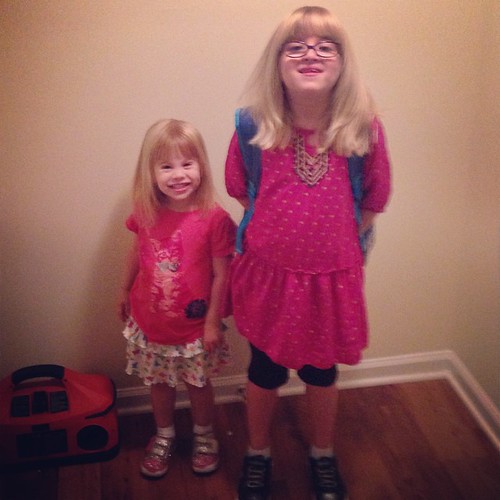 Here’s where I get to my main point:

You can be in a really hard phase of parenting, and it can also be really good at the same time. These are not mutually exclusive concepts.

Just because it sucks sometimes, doesn’t mean that it isn’t also amazing and totally worth it.

I struggle with weekday evenings. It often feels like a nightly marathon. It starts with dinner, then homework, then bathtime, then one last snack (usually fruit of some kind) before we brush teeth, read books, and settle in for the night. Combine that with trying to make sure we’re set up for the next day – packing Catie’s lunchbox, setting up the coffee pot for me – it’s exhausting and I often get stressed out and short-tempered with them.

(Credit where it’s due: I almost never do the dishes anymore, because Chris does them for me. So that’s one less thing off my “nightly marathon” plate, and I make sure that I always thank him for doing it, because I am truly grateful for the fact that he does little things like that to make my life easier.)

So, the other night, I was irritable and kind of rushing the kids through the whole bedtime routine – making sure Lucy went to the bathroom one last time, making sure Catie took her asthma medication, all the stuff on the nightly bedtime checklist.

I finally got the girls into their room, and Lucy picked out a Sandra Boynton book for me to read to her. Catie said, “Hey, Lucy, you want me to read to you instead?” Lucy said yes, so Catie climbed into bed next to her, and read to her. 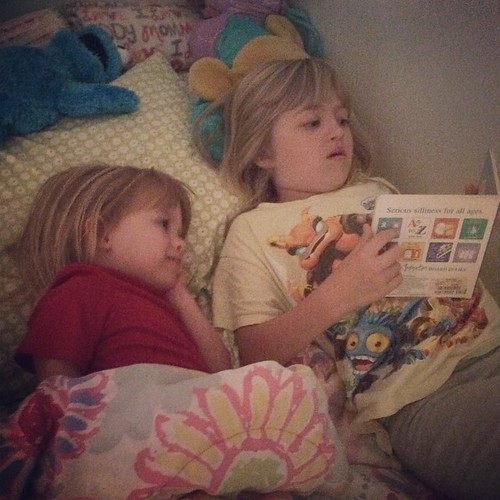 It was one of those moments that just made me so happy. I love it when they’re sweet to each other, I love that Catie is more eager to read, I love that Lucy is old enough to not freak out when we suggest changing her routine just a tiny bit (6 months ago, she would’ve screamed if Catie had gotten into her bed to read to her instead of me).

So yeah, being a parent is hard. But ignore the Chronic One-Uppers. There will always be hard phases. The good stuff balances it out, and more often than not, the good stuff significantly outweighs the hard stuff.

And I guess that’s my version of the “just wait!” thing – if you’re in a phase where parenting feels like it’s just too much and you can’t deal with it, just wait, because someday your kids are going to do something that knocks the wind right out of your chest because of how overwhelmed-with-love you are.

And ok yeah, maybe that’s cheesy. Sorry for that. But damn, if it isn’t the truth.

P.S. Thanks for the inspiration on this one, Gwen.

4 thoughts on “the hard and the good”