I got to Mississippi on Friday around lunchtime. Since I had some time to kill, I goofed off for a while – I drove past my old house (that felt weird), went to a consignment shop that one of my sister’s best friends owns (she hooked me up with 2 dresses, a shirt, and a pair of jeans that are a size 8 and actually fit my ass, so I love her for that), grabbed a bite to eat, then went to the liquor store and grocery store to have supplies to bring over to my friend Melanie’s house.

I got to Melanie’s right around the same time that she got there with her kids. Later, our friends Allison and Michele came over, and the husbands watched the kids while we sat around the kitchen drinking, eating, and catching up. It was basically perfect.

The next day, we had a reunion picnic planned. It so happened that very few people showed up, but the weather was lovely, and I got bonus time to hang out with my girls and their families, so that was fine by me. 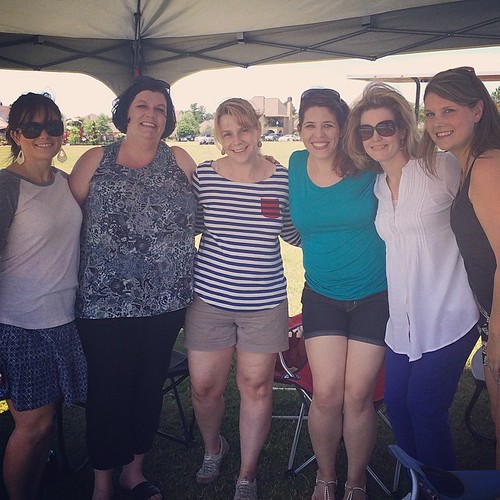 (The girls on the far left and far right of this pic were in other grades, and I don’t know them as well. The four of us in the middle – Allison, Melanie, me, and Michele – those are my girls.)

After the picnic, Allison had to go, and Melanie and her husband and kids needed to stick around for some family shindig, so I followed Michele over to our school’s church and dug around through some memorabilia.

I need to back up here and explain something about my school. Where I grew up in Mississippi, the public schools were not very good (not a big shock, since Mississippi usually ranks 50th in the country for public education). So, generally, if your parents could manage to afford it, they sent you to a private school. The school my parents chose was affiliated with a Baptist church (funny, because we’re Methodist). The summer between my first and second grade years, we merged with one of the local council schools. (Only click that link if you want to read some truly horrifying racist shit.) The school – while retaining the name of the Baptist church – moved to the council school’s campus a couple of miles away.

In 2000, the school was foreclosed (the graduating class of 1994 had a whopping total of 29 students, so it’s not really surprising that they were in financial trouble). Before the bank came to seize everything, the administration of the school called the church and was like, “hey, we have all this stuff, can we stash it at the church?” Apparently the church has a little annex building, and they gave up one room, and that’s where all of my school’s memorabilia is now stored.

(In the last 14 years since the school was closed, the campus was taken over as basically a squatter’s den/crack house, and the majority of it has burned down. I think it’s mostly just a big empty field now.)

I’m not usually a nostalgic person, and I wasn’t all gung-ho about going to the church to check out the memorabilia room, but digging around with Michele was fun. Mainly because we found some random crazy stuff, and cracked each other up, like this oh-so-fashionable band uniform: 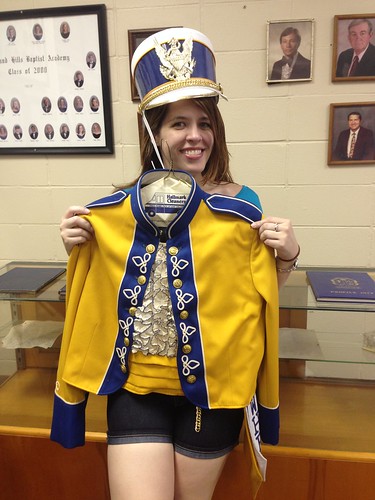 (I know I look naked, I swear I’m wearing shorts.)
(Also, side note: I was never in the band, I just thought this was funny.)

And a really hideous sweater with the school logo on it. I think my sister had one of these in the 80s. Or maybe these were for faculty, I can’t remember. 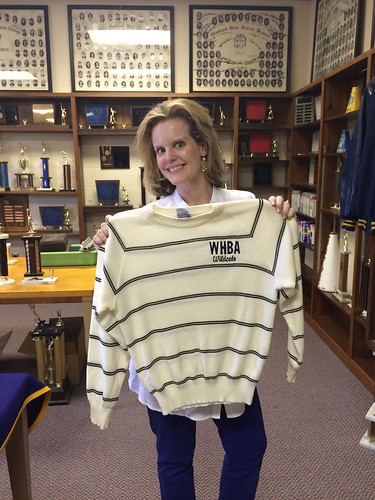 As kids, I don’t think that any of us realized that we were privileged white kids in what basically amounted to a segregated school. But that’s more or less what it was. As evidenced by a photo I found in a yearbook from 1982-1983, of that year’s homecoming court. Keep in mind this is not, like, pre-Civil Rights era. This was 30 years ago, the year I was in first grade. 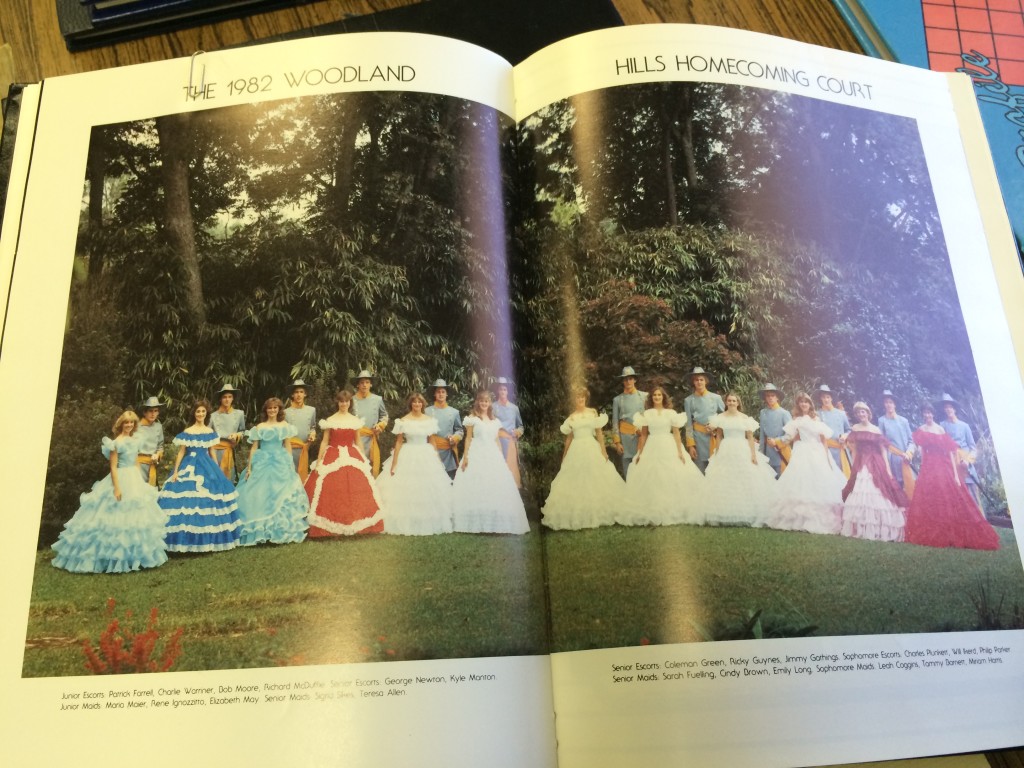 It’s a bad picture because I took it under fluorescent lights, but as you can see, all the girls on the homecoming court wore antebellum hoop skirt dresses that year. And all the boys wore Confederate uniforms.

I just… yeah. I have no words. My jaw dropped.

And it’s funny that a lot of us have grown up and realized just how bizarrely racist some of our school traditions were. At the reunion on Saturday night, one of the guys mentioned something about Slave Day. I had completely forgotten that until he mentioned it.

SO! Slave Day? Was one day a year that all of the juniors were auctioned off to the seniors and lower-classmen, and for that one day, you had to follow around the person who bought you, and do whatever they wanted. They auctioned people, and called it slave day. In Mississippi. And it was a school fundraiser! Endorsed by the faculty and administration! WHAT. THE. HELL.

That is just fucked up, no way around it.

(If memory serves, the year I was a junior and it was my turn, I gave my brother some money to buy me, which he did, and I did all of his homework for him that day.)

Anyway, Saturday night was the big reunion dinner, and we got all decked out. 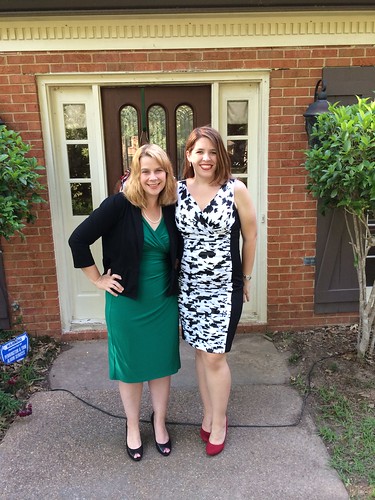 Melanie and me. This is the best pic I have of my dress and red heels.

We had a private room at a nice restaurant. Considering our class is so small, we had a pretty good turnout. I think it was around 25 people (including spouses). There were only two people there who I actively wanted to avoid, and it turns out that it was pretty easy to just not make eye contact with them at all, and only chat with the people who I wanted to see.

Michele had mentioned going to a bar after the reunion dinner, and initially I thought that sounded fun. But then I had three drinks during dinner (I wasn’t driving, I rode with Melanie and her husband, and he drove), so by the time dinner finished, all I wanted to do was get my Spanx off, put on my yoga pants, and go to sleep. So that’s what we did. Because that’s what happens when you get old, I guess.

The next day, my flight didn’t leave until late in the afternoon, so I met up with Michele for brunch. (Allison was packing for a beach trip, and Melanie had gotten roped into helping out with Sunday school at her church.) That was fantastic, and gave me that last little hit of “girl time” that I needed. Then I went to the airport, dropped off the rental car, hopped on a plane, and five-ish hours later, I landed at RDU, and Chris was waiting for me at baggage claim.

Overall, I’m really glad I went, because it made me remember something: there’s a very small group of people, who have known me since I was in first grade, who will always love me and not judge me, no matter what. And it doesn’t matter how many years it’s been since I’ve seen them last. When we’re together, it’s like we didn’t even miss a beat.

I cannot even begin to tell you how awesome that was. There was one of my girls who was missing because she couldn’t get a cheap enough flight (she lives in Colorado), and that bummed me out a lot, but man, getting to spend time with 3 of the 4 girls who I wanted to see was damn therapeutic for my soul.

So it was really good. I miss them already. Guess I’ll have to go back for the 30th reunion in ten years.

One thought on “reunion recap”