I’ve been debating on whether or not this is a topic for my blog, and… well, here goes.

I’m getting a boob job next week.

A lot of people I know, upon hearing this, have reacted along the lines of, “What? Why? Your boobs are fine!”

You know what those people have in common? They’ve never seen me naked.

Have you seen those super-padded “add a cup size” bras? Those are all I own. So, if you think my boobs look normal, that’s why.

I’m not going to post a topless photo of myself on the Internet to prove just how much I need this, so instead, I took a picture of myself in my pajamas and just pulled my t-shirt tight so you can see exactly how much I’m not rocking up top. 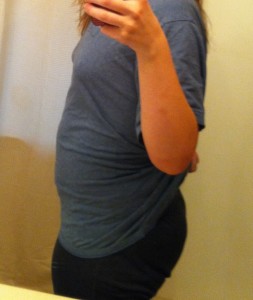 See? There’s not a lot going on there. Like, at all.

And I’ve wanted bigger boobs for the past 20 years, at least. For a while I thought, oh well, someday I’ll have kids and they’ll get bigger. Only they didn’t get bigger. Even after my girls were born and I thought that maybe I’d get giant nursing boobs? Nope. I went up maybe half a cup size (and that’s being generous), but that was all.

I remember trying on nursing bras in a store, and realizing they didn’t make padded, push-up nursing bras. And I cried. (Although to be fair, I’d had a baby the week before, so I cried about lots of things then.)

Perk of having had a blog for ages: I realized that oh yeah, I’ve written about this before. Key passage there:

I started thinking about how most women have at least one part of their body that they hate and obsess about constantly? Mine has always been my breasts. They’re too small, they aren’t a pretty shape, my nipples are proportionally too large, whatever. Hating my boobs has pretty much been a constant in my life since puberty. I guess I feel like this is just another way in which they’ve failed me.

They failed me twice, actually, because breastfeeding didn’t work with Lucy either. And then earlier this year, I lost over 30 pounds, which is wonderful, but I went from having pretty-much-nothing boobs to now-wrinkly-REALLY-nothing boobs.

And it’s not like I want anything freakishly large either. I want my upper body to feel proportionate to my lower body. No giant circus clown boobs. Just, I don’t know, a solid C cup would be lovely.

Chris is a typical guy, so he doesn’t really care one way or the other – boobs are boobs. But since I decided to do this, there have been so many boob-related puns lately, y’all – like he “fully supports” my decision, jokes about cups that runneth over, etc. He’s awesome, but there’s also been a lot of eye rolling happening over here.

I worried a little about how I’d explain it to Catie, because I’m so cautious about her learning negative body image ideas from me. (For example, I never tell her that I’m on a diet to lose weight, I tell her that I’m on a diet to make myself stronger so that I can keep up with her and Lucy.) So I kind of casually mentioned that you know, my boobs don’t look the same since I had kids, so a doctor is going to fix them up for me, but it’s no big deal. She kind of shrugged and said, “oh ok.” And that was that.

(Obviously, since Lucy is only two, I don’t worry about what she thinks too much. I doubt she’ll internalize any body image issues at her age.)

So, yeah. Boobs. Next Thursday, July 18th. And I am really, really excited, you guys.