It’s never a good idea to sit down and try to write a blog post when you don’t have anything specific in mind that you want to say, but I kinda just want to move that other post down the page a bit.

Hey, mind if I complain about my week?

Monday, the kids and I went to my parents’ house for dinner (as we often do, since they live a little over a mile away and they love their grandkid time). At some point, Catie went to use the bathroom. Then I heard her start crying and calling for me.

Turns out, she had a UTI. My parents kept Lucy while I took her to Urgent Care.

That kind of threw the whole evening off. We went to Urgent Care, got a prescription for antibiotics, went to Rite Aid to get it filled, went back to my parents’ house to pick up Lucy, then headed home. It was after the kids’ bedtime already when we got home, and I still had to bathe them and do the whole bedtime routine.

It was somewhere in that frantic bedtime rush that I realized everything in my freezer had melted, and everything in the fridge was cool-ish but not cold.

There are times that I miss being a homeowner. Like, I hate the wallpaper in my dining room-turned-office (it’s a floral pattern that I think is ugly), and I wish I could rip it down and paint the walls a soft, neutral color. But on the other hand, there are times like this, when a major appliance breaks, and I don’t have to pay to fix it, and I thank my lucky stars that we rent this house.

My landlord has a website where we can file maintenance requests, and they’re pretty prompt about responding to them. An appliance repair guy came out the next day to look at the fridge, decided it was too old to bother fixing, and TA-DA! I’m getting a new fridge. Which is awesome.

(Except for the part where it’s now Thursday and I still don’t have a new fridge yet, and I’ve lost a ridiculous amount of money on all the food I’ve had to throw away. Hopefully it’s getting delivered today.)

Complete topic jump: yesterday I took both kids to get haircuts. Catie was way overdue, her hair was the longest it’s ever been in her life. At first, she said she wanted her hair cut short, so she wouldn’t need a ponytail every day (it’s HOT in the South, you don’t want all that hair on the back of your neck if you’re a little kid who likes to play outside). Then she changed her mind and decided she didn’t want it that short after all. 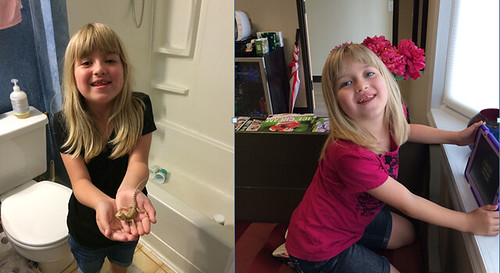 My hairdresser, Kim, took off over 3 inches, and it’s still plenty long enough to put in a ponytail.

(I know Catie will probably hate these pictures of herself someday, because I hate all the pictures of me with gap teeth when I was her age, but man, I do love that awkward little smile of hers.)

Lucy waited patiently for her turn to get a haircut. 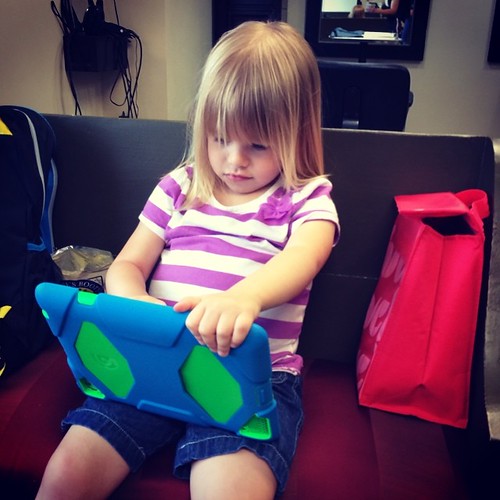 Then she sat in the chair like a big girl for her haircut. (Kim had some cushions to boost her up so she wouldn’t need to sit in my lap.) 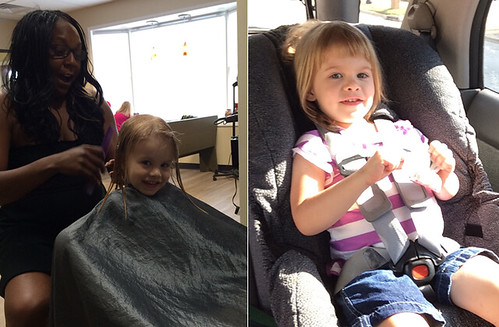 Another complete topic jump: Chris and I have marathon’ed a lot of shows over the past year or so. We’ve watched Breaking Bad, Homeland, House of Cards, Orange is the New Black, Masters of Sex, and probably something else I’m forgetting. We’ll watch one or two episodes a night, and work our way through them.

Last night, we watched the first episode of the first season of The Walking Dead.

Y’all, I am… not at all sure that I will be able to handle watching that show.

If you’d like to leave me a suggestion for something good that won’t scare the crap out of me, please do. (And keep in mind it has to work for both of us. Like, I can’t watch Game of Thrones because I can’t handle that much torture/violence. And we can’t do girly shows like Veronica Mars, because, no.)

So, you know, everything is fine. Catie is feeling better (Bactrim is good stuff), and I’m making some fun plans for this weekend while the kids are with me. We’re all good here.

Now if I can just get that fridge delivered…

7 thoughts on “nothing to see here, folks”