This week’s (W)rite of Passage challenge is: Character. The idea is to study a person’s character and make a story surrounding them.

This was extremely hard for me to write, and I have a feeling I’m going to get in a whole world of trouble if my dad ever reads this, but here goes.

Sometimes he doesn’t recognize the old man in the mirror.

He gets up in the morning and has his breakfast – cup of coffee, bowl of cereal – then heads off to the golf course. Rain or shine.

Since he retired, this golf course has become his life. All of his friends are here. He even got a job here; two days a week, he’s the guy who stands at the first tee and tells groups of golfers when they can tee off. Sort of a traffic director, if you will. In exchange, he has no membership dues, he gets free cart rentals, and a free lunch at the clubhouse. For an old golfer, you can’t find a much sweeter deal than that.

He’s at his happiest when he’s here. He’s friendly, even outgoing. They gave him the “Sportsman of the Year” award a few years ago.

But at home, it’s a different story. He doesn’t want to do much, he just sits in his chair and watches TV. He likes to watch sports – football, golf tournaments – and the History channel. But he gets angry and frustrated a lot. He thinks that his wife of 40 years nags at him all the time. She keeps pointing out that his memory is slipping. He doesn’t want to think about that. He’s seen some of his friends from the golf course who ended up with Alzheimer’s, and it scares him. So he refuses to admit that maybe there is a problem with his memory, or that he should talk to his doctor about it. When his wife reminds him of times that he’s forgotten things (like the time he forgot where Northside Drive was, even though he’s been driving down that street since 1971), he denies that it ever happened.

He’s 73 now. His parents are gone. He was an only child. He has a couple of cousins that are still around, but they don’t see each other often. His wife and kids are all that he has left, really. His kids have all moved away. He doesn’t understand why none of them like Mississippi, he thinks it’s a great place to live. Of course, he’s lived here for at least 60 of his years on this earth.

His wife keeps talking about how she wants to move to North Carolina, to be closer to the kids and their granddaughter. He doesn’t want to move. He doesn’t like change. He keeps using the golf course as his excuse to stay. It might sound like a flimsy excuse to some, but not to him. That golf course is his life.

But the golf course isn’t doing so well. They’re losing members. Sometimes when he’s at work, there are no golfers to direct, so he just stands around and practices his swing. The secretary who works there mentioned to him that the place lost tens of thousands of dollars last year, and the owner is getting phone calls about unpaid bills. She said she doesn’t know how it’s going to survive another winter.

If the golf course closes, he won’t have anything to keep him here. He supposes that then, his wife will get her way and they’ll have to move. He doesn’t like to think about that.

So he’ll try to forget about it. And tomorrow, he’ll wake up, look in the mirror, and wonder who that old guy is staring back at him.
———————
More (W)rite of Passage entries here:

The lovely and amazing Mrs. Flinger has issued a challenge for some of us bloggers to try to write better, and since I lurves me some Mrs. Flinger, I figured what the hell, I’m in.

I’ve been pondering on this one for a couple of days, because there are so many to choose from. Horror stories involving your first period? Been there. Pooping during childbirth? Done that too. And since I didn’t meet my husband until the ripe old age of 28, I have plenty of embarrassing dating mishap stories too. (One of my personal favorites? The time I was making out with a boy and I got a nosebleed. Neither of us noticed until I had bled all over both of our faces. We looked like a couple of extras from a bad zombie movie. Traumatic, to say the least.)

Then I realized that my most truly embarrassing moments involve alcohol, and the over-consumption of it. (I promise, I’m not an alcoholic. I hardly ever drink now. I just flirted dangerously close to being one when I was in my 20’s.) But there’s a lot of good fodder there. Puking in public? Yep. Being so lovey-dovey from the booze that I’ve made out with total strangers, even those of my own gender? Um, yeah, that too.

But there’s one that keeps standing out in my mind: Halloween 2004.

What’s funny is that I just checked my blog archives (which go back to August 2003, when I started this little site) and I noticed that I never mentioned anything about it, because I was so horrified at my own behavior.

Dave and I had been dating for about five months. One of my girlfriends invited us to a Halloween party, and we decided to go, even though my friend was the only person there that we knew. I dressed as a Catholic school girl, Dave was a priest. (Note: neither of us is Catholic.) Dave also wore a Bill Clinton wig and black lipstick, but I don’t remember why. We just thought it was funny at the time.

I don’t remember much of the evening, honestly. There are pictures, and they make me cringe every time I see them. I’ve never posted a single photo from that night, but since I’m opening up and sharing my embarrassment now, here you go. 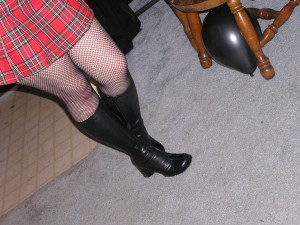 This is seriously the least embarrassing photo of me from the entire damn night. 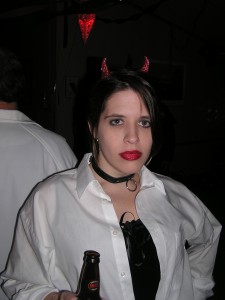 So, yeah. I was drunk and made a general idiot of myself. No big shock there. And really, it wouldn’t have been a big deal because I didn’t know any of those people and I would never see them again, so what do I care?

But then, somehow I ended up in the bathroom with the guy who was hosting the party. I’m not even sure why, I think it was because my bracelet broke and he was getting me a safety pin to fix it? And the dude was kind of sleazy, and Dave insisted that he was hitting on me (maybe he was, I was too drunk to notice), but while we were in the bathroom, I started telling him about Dave and how in loooove I was with him, but we hadn’t officially said “I love you” to each other yet, and I was so crazy about him, and I was so tortured about it because what if he isn’t in love with me like I’m in love with him, and blah-blah-drunken-rambling-blah.

Then, someone comments to Dave, “Hey, where’s your girlfriend?” And Dave realizes that I’m… uh… in the bathroom. With another guy. With the door closed. So he comes to get me, and in my drunken-rambling state, I slammed the door on him when he tried to open it. Let me repeat that in case you missed it: I slammed the door on my boyfriend so I could stay in the bathroom with another dude. And of course, all I was doing in the bathroom was talking about Dave, but how in the hell was Dave supposed to know that? So he was pissed. As anyone would be in that situation, really.

When I came out of the bathroom, Dave said it was time to go, and as soon as we got in the car, he told me how pissed he was. I sobered up enough to suddenly realize that holy crap, he’s about to break up with me right here because of how freaking stupid I am. So I burst into tears, and I told him I loved him.

And that was the first time we said our “I love you”s.

Three months later, we got engaged.

This past Halloween, I reminded him that it had been five years since the first time we said “I love you” to each other. He said, “Oh yeah, the night I almost dumped your ass.” I pointed out how happy he should be that he didn’t dump me then. It’s funny, though, that even though everything worked out ok in that situation (exceptional, even), I still cringe whenever I think about that night.