My dad is going to be 80 years old in a few months. He had a dog when he was a little boy – maybe 9 or 10 years old – but there’s a whole mystery over whether the dog ran away or whether my grandmother gave the dog away. She was not what you might call an animal person. Either way, his little dog Fido was gone, he was heartbroken, and he’s wanted a dog ever since.

My parents have always had cats. My mom told him he could get a dog when he was willing to clean up its poop, and my dad is… not a guy with a high poop tolerance. Like, he’s changed one diaper in his life. Three kids, two grandkids, one diaper. Ever. So the dog poop condition has kept him from getting a dog for years.

Last month, my mom’s cat had to be put to sleep. And I say my mom’s cat, because that’s what she was. That cat hated everybody on earth except my mom. She’s the only cat I’ve ever known who hated me, and she’d hiss when I walked in the room. Blanche, the cat, was 18 years old, so she had a long, happy, very spoiled life. Still, my mom was sad, and I know their house has felt a little bit emptier without her.

Since they had no other pets, I started searching on PetFinder for dogs that my mom might agree to. I figured that if I found them an older dog that was already house-broken and well-trained, she might go for it. But when I mentioned it to her, she said absolutely not. No dogs.

Then I started thinking: my kids have been asking for a dog forever, so maybe we should get a dog. They’d love it, and I wouldn’t mind having the companionship during the day while I’m working. And as a bonus, we go to my parents’ house at least a couple of days a week, so if we had a dog, he/she could come with us and let my dad feel like he had a dog, without dealing with poop clean-up. (After two kids, a cat, and a bearded dragon, I’m pretty immune to poop.)

When I mentioned this to Chris, he just kind of shook his head and laughed. I’m pretty sure he thought I was crazy, but he said he’d support whatever I wanted to do.

So for the last few weeks, I’ve been searching online for dogs. Several times now, the kids, Chris, and I have gone to meet dogs at different shelters and adopt-a-thon events. Then, on Monday afternoon, we met Roxie. 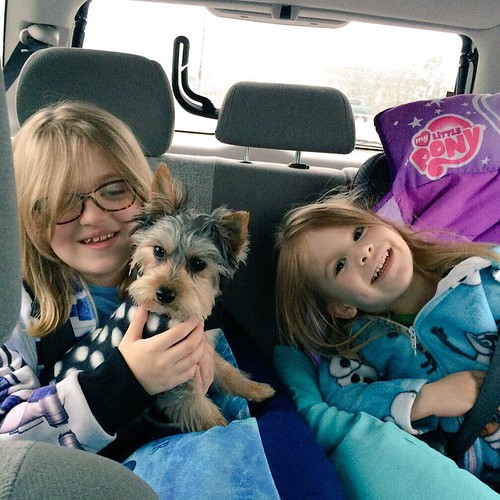 I’ve always had a soft spot for Yorkshire terriers, because our neighbor had one and she was the sweetest dog. So when we met Roxie, it took me less than a minute to decide that this was our dog. We took her home that day.

And oh, she’s a sweet dog. She’s about a year old, mostly house-broken (she was completely house-broken at her former home, but adjusting to a new house means accidents, and I knew to expect that), she’s great with the girls, and she’s mostly ok with Beaumont. Roxie really wants to play with Beaumont, and Beaumont wants nothing to do with her, so they’re sorting out their boundaries. It’s an adjustment phase for everyone.

I think Roxie might be a little traumatized from being given away by her previous owners. She follows me from room to room, and seems to want to keep an eye on me all the time. Last night, Chris and I dropped her with my parents while we went to buy a crate for her. (I didn’t want to leave her loose in the house and risk her fighting with Beaumont while we were gone.) My mom said she sat at the door and cried for us after we left. I felt so bad for her, hopefully the separation anxiety will ease up over time.

Initially, I wasn’t sure if we’d keep the name Roxie or not, and I thought we might change it to something else. But I realized that she knows her name and responds to it, so that would be confusing for her. Plus Lucy calls her “Woxie,” which I love. And I have an excuse to sing “Roxanne” all the time now, and that’s pretty fun. 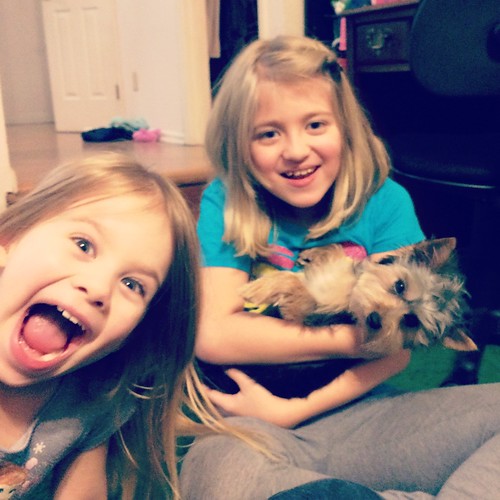 And I’ll admit, I’ve been having a little bit of that “holy crap, what have we done?” feeling like you get when you have a baby. Like: oh god, life will never be the same and nobody will ever sleep again. But I’m pretty sure that’ll pass as we all settle in and adjust. I’m pretty fond of her myself. 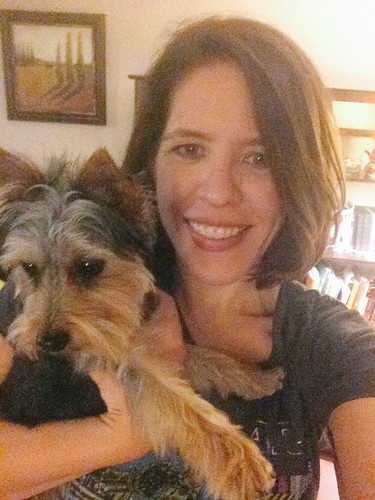 So, yeah, a new family member for a new year. Big changes, but pretty great changes.