Catie was in first grade when the shooting at Sandy Hook happened. It gutted me at the time, all those babies who were lost, the same age that my little girl was. A friend’s nephew was one of the children killed; his twin sister was in another first grade classroom and survived. I can’t imagine what those families have endured.

This most recent shooting in Florida has been devastating in its own way, especially seeing cell phone videos and the screenshots of texts the kids sent to their parents and siblings because they thought they’d never see them again. I can’t imagine getting a text like that from one of my kids. It makes me sick to think about it.

Last night, Chris and I were watching the news, and saw one of the Newtown children’s moms being interviewed on TV.

I said, “Her son should be Catie’s age.”
Chris said, “Yeah, her son was the same age Lucy is now.”

Since Lucy was just a baby when Sandy Hook happened, I never thought of it that way. It just hit me hard, this awful feeling that none of our babies are ever safe in this world.

This morning, I asked the girls when was the last time they had a lockdown drill at school. Neither of them could remember, it’s such a common occurrence. They used to trigger Catie’s anxiety; the night after every lockdown drill, she would panic and cry, and I would have to lie in bed with her and rub her back until she could settle down enough to fall asleep. Now she doesn’t even really register it.

Since Lucy is only 6, I wasn’t sure how the school explained the whole lockdown drill process to them. I asked her if she knew why they did them.

She said, “It’s in case a bad guy comes in with a gun and tries to shoot us.”

And that, folks, is the story of how I ended up hugging both of my daughters and sobbing my eyes out at 7:30 this morning. (Until Lucy told me that I was hugging her too tight and she couldn’t breathe.)

I don’t know what else to say about this. I just hate that this is the world my kids have to grow up in. I’m watching these teenagers protesting, and I’m scared to feel anything like optimism, but I really and truly hope these kids can fix this mess, where all of the adults have failed them. 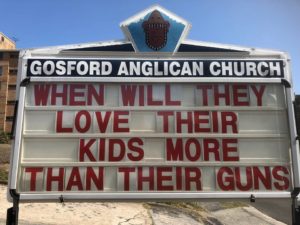 One thought on “patiently waiting for the teenage uprising”