I haven’t blogged much lately, so I sort of forgot to mention that Catie finished 2nd grade a few weeks ago, and she’ll be a third grader as of Monday. 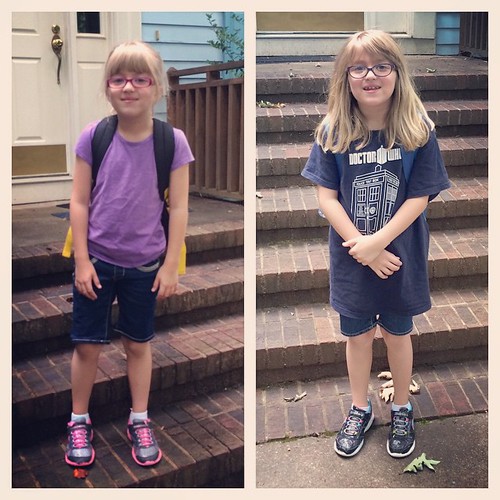 At the same time, Lucy has moved up to the pre-K class at daycare, which feels completely surreal, because it’s the exact classroom where Catie was, 4+ years ago when I was pregnant with Lucy. 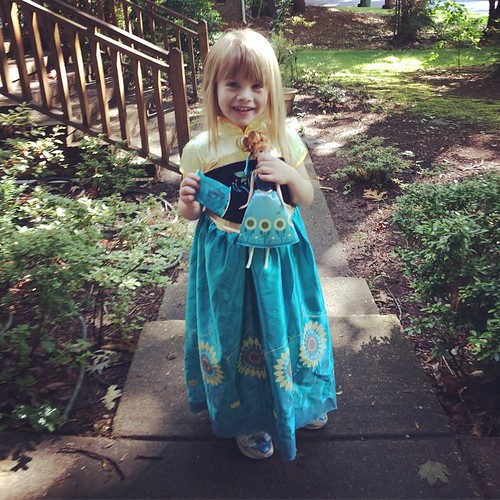 Catie has pretty much outgrown the “school-age” camp at our daycare, most of the kids there are in kindergarten or first grade, and she didn’t want to go anymore. She was scheduled to go to Science Camp for one week (it was last week, and she loved it), but she asked if for the rest of her summer break, she could just stay home with me.

I should explain a little about my job here, because I don’t talk about it much: I work on a small-ish team at a large company. My team is maybe 70 or so people, but we’re spread out all over the U.S., and some people are in the U.K., Russia, and China. My manager is based in California. Because of time zone issues, working from home makes more sense than a set 8 to 5 office schedule. It has its downsides; I often end up working late at night after the girls are asleep, when I’d much rather curl up on the couch with Chris and watch the Daily Show. But it also means that my daytime schedule is super-flexible. I know most working parents don’t have this type of telecommute option, and I feel very fortunate that I can have this flexible schedule working at a job I happen to love.

So, Catie wanted to have some “lazy time” at home, and I don’t mind, because she’s pretty self-sufficient and easy to have around. The problem is that I didn’t want her to sit on the couch playing Minecraft all day. (I have no issue with Minecraft, I think it’s actually good for their creativity to build things, but there’s no video game in the world that needs to be played all day.) And since I’m working, I can’t completely disrupt my schedule to help entertain her with various projects.

She did this same thing during her 3-week spring break in April, and I made a deal with her that if she wanted to stay home, she was going to have to run with me, because at least she’d be getting SOME exercise and fresh air. And let me say, that was a terrible idea. The thing I love about running is that I can lose myself in it and zone out, and you cannot zone out when your 8 year-old is whining that it’s too hard and she wants to just walk for a while. So I’d get irritable and start barking at her like a drill sergeant, she’d get pouty, and it just sucked.

Now, though, it’s July and it’s too hot to run most days. (I have a rule that I don’t run if the heat index is above 85. I love running, but I’m not a masochist.) So on this summer break, our daily exercise break is to go to the pool; Catie plays while I swim laps. I’m normally hyper-vigilant about watching my kids in the pool, but Catie is so cautious, she never goes past the water that’s 3 1/2 feet deep because she doesn’t want to be in over her head, and there are always 2 lifeguards on duty. So she’s fine, she plays with the other kids and has fun, and for a few weird minutes I feel like one of those stay-at-home moms who can do nothing but hang out at the pool with their kids on a weekday. Except not, because I swim laps for about 30-40 minutes, then we come home and shower so I can get back to work.

[Side note: swimming is WAY harder for me than running, and I am ridiculously bad at it. With running, I know I’m slow, but I don’t care because: whatever, I’m running. With swimming, I feel like a baby elephant flopping around in a bathtub.]

Also, if she’s had too much screen time, I bought Just Dance 2015 for the Wii, and yes ok, it’s still a video game, but at least she’s up and moving. I’ve done it with the girls a few times, and that game is a workout. So, if she starts whining that she’s bored: ok, go try to beat your high score on “Dark Horse” by Katy Perry.

(I admit, I mainly bought the game because it includes “Let It Go.” Try to guess which one of my kids has the high score on that one. Go on, guess. Hint: it’s exactly who you think it is.)

And really, she’s been great. She hasn’t whined much, and she’s spent a lot of time working on little art projects (as the growing stack of her drawings on my desk can attest), not playing video games. It’s been really nice having her around.

At the same time, I’m excited for her to start school on Monday. Partly because I want to get back into our regular routine, but also because THIRD GRADE. She’s getting so grown up! It’s both weird and completely amazing to witness.

2 thoughts on “how we spent our summer vacation”