I was thinking that the weekend leading up to my half-marathon would be lazy and involve eating lots of carbs. Turns out, I was only right about the carbs.

Friday, Lucy’s daycare was closed for a teacher workday. It just so happened that the same as last year, the teacher workday was also the day of Catie’s school Fun Run. So Lucy and I went to watch Catie and her classmates run around like tiny maniacs. 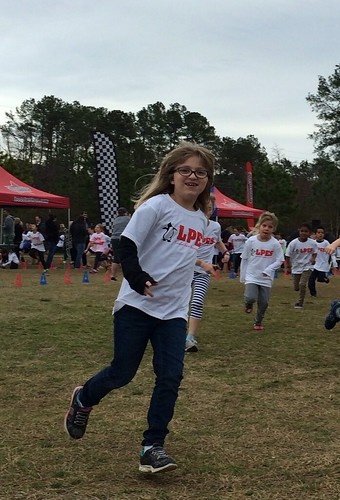 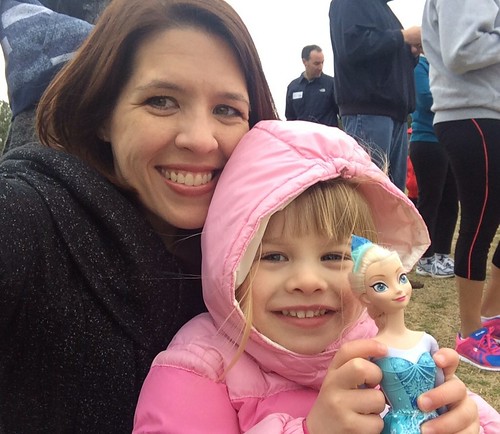 Lucy had to get Elsa in our selfie (of course). After the run was over, I was able to get a picture with my big kid. 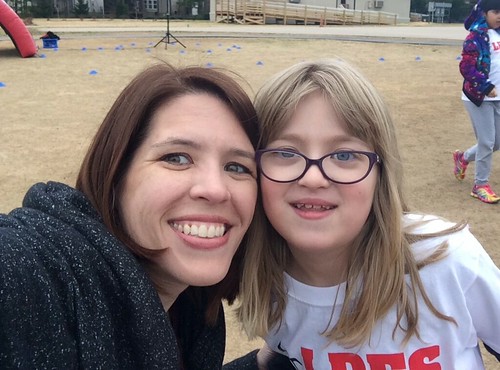 I love it when I get to go to school functions like that. I often feel like I’m phoning it in with school-related activities, because I have to let the stay-at-home moms do all of the classroom volunteering stuff. Just from a practical/work schedule angle, it never works out. So I get super-excited when I get to show up for something for her.

After the Fun Run, I had promised Lucy that we would go see the new Cinderella movie. To be fair, though, Lucy didn’t care much about Cinderella, the only thing she really wanted was to see the “Frozen Fever” short before the movie. Like, she had to do a costume change between the Fun Run and the movie theater, so she could wear her Anna dress to the movies. 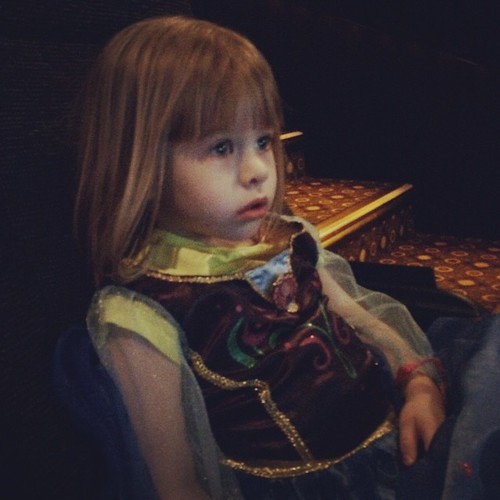 It was fun, especially since she and I don’t get a lot of “Mommy and Lucy” outings, just the two of us.

As far as a movie review, “Frozen Fever” was cute, not as funny as the movie, and a lot shorter than Lucy would have liked. But hey, apparently they’re making Frozen 2, so I guess she’ll be set when that comes out.

As for Cinderella: I really liked it, and it made me cry more than once (damn Disney), but I’ve always had a few problems with that whole story. Cinderella is basically the girl at your high school who came from an abusive family, who married the first guy she could get as soon as she turned 18, just so she could escape her awful family. Those stories don’t usually end with a “happily ever after.”

And, I don’t know, there’s something that rubs me wrong about Cinderella’s “have courage and be kind” motto. Let’s face it, Cinderella is a total doormat to her stepmother & stepsisters. So sure, “have courage and be kind” is an admirable ideal for your life, but you don’t have to be (and probably shouldn’t be) kind to people who treat you like shit, and I think that’s a potentially damaging message to send little girls. It’s basically saying that you don’t have to stand up for yourself as long as you play nice, and that’s, frankly, a total crock.

Hey, what do you know, feminist beliefs conflicting with a Disney princess movie, how original am I? Honestly, the movie was fun, and I’d venture to guess that the vast majority of little girls grow up knowing that princess stories are make-believe and are smart enough to distinguish between them and real life, so whatever, let’s move on.

On Saturday, Comic-Con was here, and I knew Catie would love it, so we went. I asked Chris to come along to help me wrangle the kids (I was worried Lucy would get overwhelmed or scared of some of the cosplay people, and it helps to have an extra adult there to tag team with). Chris isn’t the type who requires a lot of arm-twisting to get into nerdy outings, so he was game.

I had shown Catie pics of other Comic-Cons and people who dress up for them, and she decided that she needed to wear a costume as well. 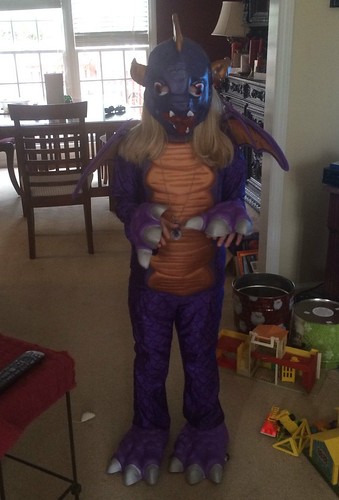 She went as Spyro from the Skylanders video game that she loves. She ended up not wearing the feet part of the costume (made it too hard to walk) or the mask (too hot), but even still, a surprising number of people there knew exactly who she was.

I’d never been to any type of Comic-Con event before, so I wasn’t sure what to expect, but it was pretty fun. And it led to this, which may be my favorite picture of all time: 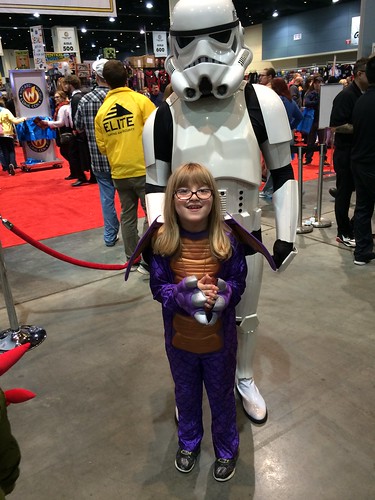 Proudest geek parenting moment to date. (Lucy was a little freaked about the stormtrooper, but she high-fived him from a safe distance.)

The main thing (or, uh, person) Catie wanted to see at Comic-Con was David Tennant, who played Doctor Who. Unfortunately, getting a photo or autograph with any of the celebrities at Comic-Con is a separate charge from the general admission fee, and his was somewhere in the neighborhood of $150 extra. I might have considered forking that over, except it sold out before I could even make a decision. So, nevermind then. Catie can pay additional Comic-Con fees when she’s an adult and has her own disposable income to spend.

(It was only $80 extra to get a picture with William Shatner. And although it seemed like a bargain compared to David Tennant, I didn’t pay for that either.)

We kinda-sorta got to see David Tennant, because his VIP Q&A session was shown on a big projector screen in the main hall, so we camped out and watched that for a while. 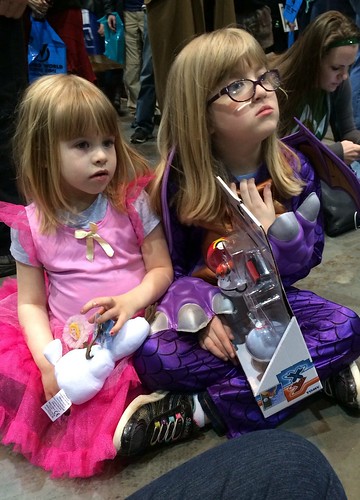 It’s not the same thing as getting to see him in person, but oh well. I bought the kids their souvenirs (Olaf & Elsa toys for Lucy, Pokemon for Catie), and they left happy.

Now for the half-marathon!

Saturday evening, I dropped the girls off to spend the night with my parents, so I could get to bed extra early and not worry about Lucy waking me up. (She’s a lot better, but still sometimes hit-or-miss.)

Sunday morning, I headed to Laura’s house, because she had a parking pass and offered to carpool with me.

As for the half-marathon bullet points:
* These things start stupid early. It was still dark outside. Why are there no half-marathons that start at, like, noon? You get up at a normal time, have a light brunch, then go run. That would be great!

* Did you know port-a-potties don’t have lights? So if it’s dark outside, it’s dark inside them? Let me tell you, if hell exists, some part of it will probably involve having to use a port-a-potty in the dark. That several hundred other runners have used. OMG. I just… I have no words.

* Related: one of my fears with this half-marathon was that I’ve never personally experienced the phenomenon of runner’s bowels, but I figured that with my luck, the first time it happened to me would be when I only had access to port-a-potties and there were several thousand witnesses around. As it turned out? It wouldn’t have mattered, because all of the port-a-potties smelled so horrifically foul that nobody would’ve known it was me anyway. (For the record, I was fine. I had to stop to pee somewhere around mile 8, because I’ve had 2 babies and my bladder is lame. But no horror stories.)

* The people who run this marathon are so incredibly nice, and the whole thing is set up really well. There were people cheering for us at various points, with big posterboard signs: “run like it’s the beginning of the Hunger Games”, “you run better than our government,” “the faster you run, the sooner you can get drunk”, and my personal favorite, “run like your iPhone is at 1%!” I was also impressed with how friendly all of the other runners were, with each other and with the volunteers. I had to get off the trail at one point to re-tie my shoe, and a couple of people asked if I was ok or needed help.

* Turns out that Sean Astin was in town for Comic-Con, and signed up to run the half-marathon at the last minute. Laura said she passed him and almost yelled “RUDY!” but didn’t. I didn’t see him, probably because I was not thinking about looking at other people’s faces while I was focusing on just getting through the run. If I had seen him, I was thinking about telling him my name was Frodo and asking him to carry me the rest of the way to Mordor. Either that a joke about The Goonies. Oh, missed opportunities.

* I gave my parking pass to Chris; he picked the girls up from my parents’ house on Sunday morning and brought them to meet me at the finish line. That was pretty awesome. 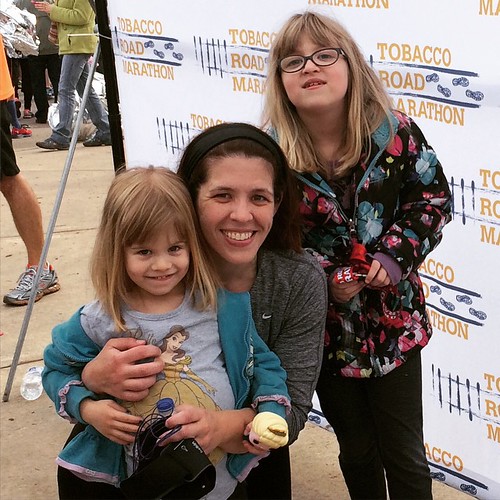 My final time for the half-marathon was 2:40. Which is probably not impressive by most people’s standards, but whatever. I finished. And that’s all that really matters to me.

(Even though Catie totally stole my medal for herself the minute we got in the car.)

2 thoughts on “princesses, geeks, and runners”