The crazy snow/ice stuff we’ve been having lately has resulted in this: Catie has been in school for 1 half-day in the past 2 weeks. Last Monday – 11 days ago – the schools had an early release day because of inclement weather. It was closed the next 4 days. School was open this past Monday, but Catie was sick, so Dave kept her home with him. School has been closed due to weather every day since then.

One half-day out of 10 school days. That seems insane. But, same as last week: Dave and I are juggling the childcare stuff back and forth, daycare has been open a few days this week (which has helped significantly because they have a school-age program for kids on break, so Catie can go there too), and generally, we’re fine.

I mean, of course it’s always frustrating to have your routine thrown off, but compared to a lot of people, I don’t have much to complain about. Our power stayed on, and nobody has been sick (other than the colds we all get this time of year), so it’s been ok. 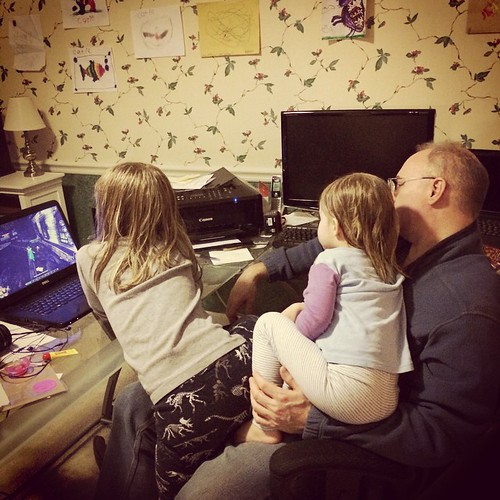 (Side note: I hate the wallpaper in my office, which is why it’s covered in kid artwork. If this house wasn’t a rental, I would tear it down so fast.)

I will admit, however, that I am not at the top of my parenting game when the kids are home while I’m trying to work. They get way more screen time than they should, because it’s the easiest way to keep them quiet and happy so I can concentrate. Catie has played more hours of Minecraft this week than I can count, and Lucy’s new obsession is the movie “Aladdin,” which she probably watched at least 20 times.

And I mean, on the scale of annoying Disney movies, there are far worse options than “Aladdin.” Robin Williams as the Genie is pretty brilliant. But good lord, if I ever get the song “A Whole New World” out of my head, I will dance for joy. I would rather hear “Let It Go” all day than that song.

At least she’s moved on from her brief “Snow White” obsession, though. I had forgotten how high-pitched and screechy Snow White’s voice is. That movie was going to break me sooner than later.

On one of our recent snow days, the kids were starting to get restless and whiny, so I suggested we do a Family Movie Night. I know, I know, more screen time, just what they need, but we were stuck in the house and I was dead from working all day.

We got “Big Hero 6” on pay-per-view, since none of us had seen it. Lucy was bored because there’s no princesses and no singing, so it wasn’t her type of movie. Catie liked it, even though it made her cry. And Chris and I both really enjoyed it, probably more than the kids.

I will say, my favorite thing about the movie was that there were two nerdy, science-loving girls who were totally badass and just as tough as the boys, and I kind of want to make Catie re-watch the movie every day just to reinforce that message. For a kid who already thinks of herself as weird for not liking “girl stuff,” I don’t think she can see that too much.

Random and off-topic, but since I’ve been spending an inordinate amount of time around my kids lately:

My favorite recent Lucy-ism is when something bothers her, she says, “it makes me annoying!”

While this winter weather break has been manageable, I would really like some warmer temps right about now. Not just because my work productivity plummets when the kids are home or because I’m worried about all the school they’re missing, but also because I am tired of running on my treadmill since the sidewalks and greenways are all covered in ice. A little nature would be nice. Hopefully it’ll be back soon.