This past weekend, I borrowed my mom’s minivan, loaded up my kids, Chris, and his kids, and all 6 of us set off for the state fair.

(Here’s where I admit that I am a suburban mom cliche, because I want a minivan SO BAD. I mean, I love my Subaru, and I’ve had it for 13 years now. But a minivan has so much room! The doors that slide open with the touch of a button! I want one. And I don’t care if that makes me middle-aged and lame.)

When we went to the state fair last year, we found out Lucy was too little to go on any of the rides. Even the baby rides required kids to be at least 36″ tall, and she wasn’t. So, this year, we had talked it up a lot, about how now that she’s a big girl, she can go on the rides! (I don’t think she remembers the incident last year where she was sobbing and pleading to go on the rides with Catie, but boy, I sure do.)

The first ride we hit were the kiddie motorcycles. As soon as it started, Lucy’s face just lit up. 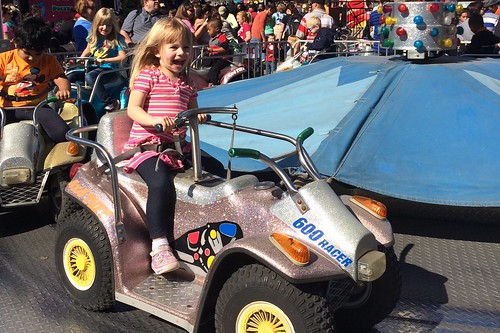 I don’t think I have ever seen joy like that. As soon as it stopped, she yelled, “AGAIN!!!” I had to coax her off with a, “hey, let’s go see what other rides they have, ok?”

Chris and I took a divide-and-conquer approach to the fair. His kids wanted to go on the scarier rides that are meant for big kids, which Catie won’t go near, and Lucy isn’t tall enough to go on. So we’d make our game plan, like, “Ok, we’ll text each other at X o’clock to see where we are, and meet up for food then.” And it worked out really well – all 4 kids got to do all the stuff at the state fair that they wanted to do. 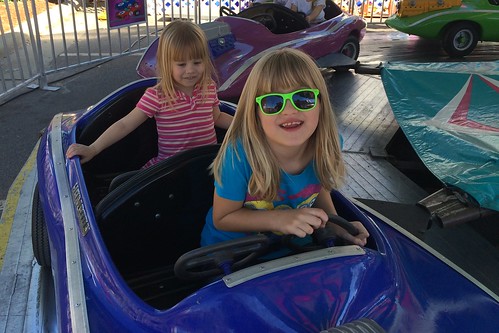 It’s funny that Catie is almost too big to go on the kiddie rides, but she’s my cautious girl, and she doesn’t want to go on anything that goes up in the air or spins her around too fast. This year, the big breakthrough was that I finally got her to try a fun house. She was convinced that it would be scary – I explained that it’s not the same as a haunted house, and nothing is going to jump out at her. And after a LONG time of arguing about it, she finally went in, and she loved it.

Sometimes it’s frustrating that she won’t try new things, but then I remind myself that I’m going to have to pay her car insurance someday, so it’s really ok that she’s so careful. 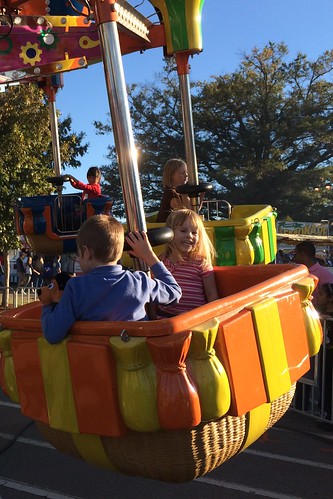 And for some of the more adventurous kiddie rides (like the hot air balloons that lift the kids several feet in the air & spin them around), Chris’s son was really sweet about going with Lucy on them, so she wouldn’t have to go by herself.

One weird thing toward the end of the fair visit: Chris’s daughter had been having a blast, and had been bugging us to go on one more ride, and asking if we could just stay a little longer. You know, normal stuff for a kid who’s having a good time – they don’t want to pack up and go home.

Chris’s kids were supposed to meet up with their mom that night for some party, but the details were never finalized, and Chris didn’t think much about it. Once his daughter realized what time it was, and that she was late to meet up with her mom, she FREAKED OUT. She was going a mile a minute, trying to rush us out (you can only move so fast in a crowd of thousands of people), and asking Chris if she could call her mom. (He said she could call her when we got somewhere quiet. Which I thought was logical, because it doesn’t really make much sense to hand a 10 year-old a cell phone in the middle of a mob.)

It was weird how quick she started backtracking her story of the day, too. “I didn’t even have any fun at the fair! You made me go on baby rides all day!” Which, uh, no. She went on maybe 2 kid rides, both times because she asked to go on them. And she was having fun right up until the minute she realized she was late. It was like she was trying to rewrite the narrative out loud, so she could make sure she wouldn’t be in trouble with her mom later.

Once Chris promised her that it was ok because her mom would only be mad at him, not at her, she calmed down. We all went back to my house, the kids had pizza and watched a movie, and they played with Spyro Jones. They were fine, and it all ended well. It was just really upsetting to see how obviously terrified she is of her own mother’s anger. His kids are so sweet, and I really worry about them a lot.

As for my kids, they were running on a sugar high until late on Saturday night. Lucy had missed her nap completely because of the trip to the fair, and she finally crashed sometime after 10 p.m. Catie was out a few minutes later. 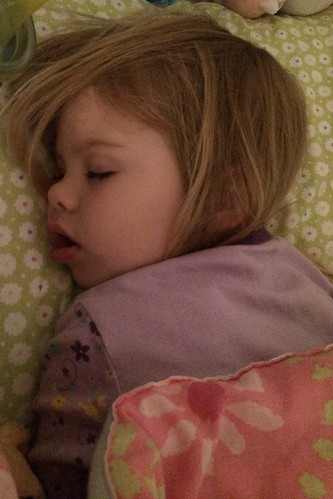 Until next year, sweet dreams of funnel cake and cotton candy.