I have a whole bunch of things I want to talk about, so let’s break this into sections: 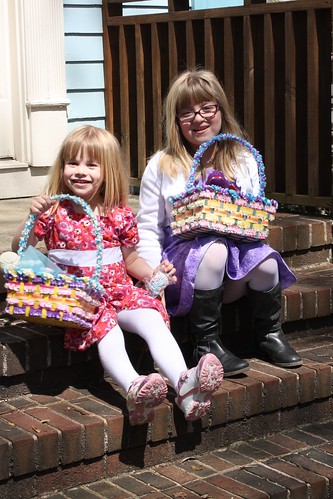 The kids were with me for Easter weekend, so we did the whole Easter bunny thing, which they loved. Lucy got a(nother) Elsa doll, Catie got a Skylanders coin purse, they both got tons of candy. On Sunday morning, we went to church, and afterward I got this pic of the girls with my parents that I love. 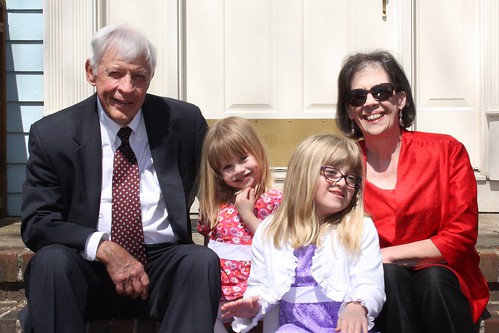 Catie is looking off to the side and my dad is squinting from the sun, but whatever. I still think it’s great. I don’t know if I adequately express how grateful I am that my parents moved up here to help me out with the kids after Dave and I split. I honestly don’t know how I’d get by without them.

Normally, on Easter Sunday, we do the big Southern meal that’s kind of like a Thanksgiving remake. Ham, green bean casserole, dressing, sweet potatoes, etc. I just couldn’t get excited about the idea of cooking all that food, and I asked Chris and my parents if they’d be ok with just grilling out instead. They all said that sounded good, so instead we did grilled chicken, veggies, burgers, and hot dogs. It was yummy, and it was a really beautiful day, so I didn’t mind being out on the deck at my parents’ house, working the grill all afternoon.

Last year, we had to do a mini-egg hunt inside because of rain/mud, but this year it was dry enough that my mom was able to hide the eggs around her yard, and let the girls have their own Easter egg hunt. 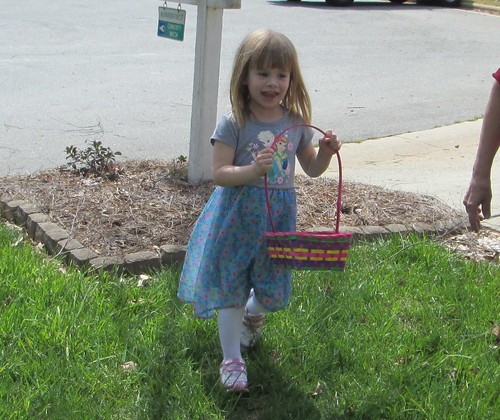 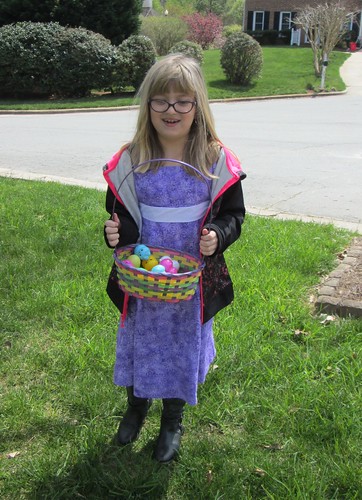 (It was in the mid-60s, I don’t know why Catie kept insisting she was cold and refused to take her hoodie off. I think she just really likes the hoodie.)

This is a subject I’ve kind of avoided, because I worry about what I write here that might embarrass my kids when they’re older. But here’s the summary: Lucy has been partially potty-trained for well over a year. She got the peeing part down immediately, but she never could get the hang of pooping in the potty. I thought she was just stubborn and holding it forever. She would have what she’d call “funny toots,” which were basically… well, sharts. (Which, FYI? Not funny at all when you’re the one who has to clean it up.)

And I mean, I tried everything. Bribes, threats, reward charts, you name it. And it wasn’t location specific – she had just as many accidents at my house, Dave’s place, daycare, my parents’ house, etc. It got to the point where she was having so many accidents every day that Dave and I both were about to lose our minds.

It finally occurred to me that maybe it wasn’t intentional? She’s old enough that she started to seem kind of embarrassed when it happened. So I googled her symptoms, and literally the first thing that comes up? Lactose intolerance.

Out of curiosity, on Friday, we switched her to the Lactaid lactose-free milk, and added probiotics twice a day, and LITERALLY OVERNIGHT, she started pooping in the potty and having no accidents. Just like that. Poof, she’s cured.

Today, we went to the pediatrician to follow up. Our doctor said that something like 80% of the world’s population can’t properly digest cow’s milk, so it’s entirely likely that Lucy is one of them.

And I realized, this might also explain why Lucy has always had such a big belly. I shrugged it off as just part of the way she’s built, but I swear that in the past 5 days since she’s been off lactose, her tummy has started to shrink. Even Dave noticed it too.

Now I just feel like an idiot for not googling it sooner. All the pain and suffering (and laundry detergent) I could have saved.

I started Whole30 on Monday, so this is day 3, and I’m kind of… fine? I keep waiting for really bad cravings to kick in, but so far I’m ok. I had a really terrible headache yesterday, and I wasn’t sure if it was because of a weather front that came through, or because of sugar/caffeine withdrawal. Maybe both? But I feel better today.

The biggest challenges for me so far have been that (a) I’m used to having a hard candy or a mint after I eat, and I miss that little sweet fix, and (b) practicing “mindful eating” and not eating in front of my computer or TV is a lot harder than I expected. (And BORING. It’s so boring.)

Recipes I’ve tried:
* Sweet potato hash – this is basically sweet potato fries in hash brown form. Highly recommend. Chris and I both loved it, and this will likely be added into our regular recipe rotation even after Whole30.

* Asian meatballs – I made this because of Melissa’s suggestion when she did Whole30. I had the same trouble she had finding the recommended brand of fish sauce, so I used coconut aminos and I still thought they were really good. Chris didn’t care for them, but he isn’t much of a red meat eater. (That’s a new thing, in the last year or so, that every time he eats red meat, it makes him sick.)

* Cracklin’ Chicken – Big thanks to Laura for this recipe, we tried it last night, and it was SO GOOD. (Chris liked it too, and he usually doesn’t eat dark meat at all.)

The biggest surprise discovery? I really like kombucha. Which is funny, because when I bought it at Earth Fare last week, Chris smelled it and laughed at me. He was like, “You’re never gonna drink that crap.” But it’s good! It’s kind of fizzy like Sprite.

I can also see how people in 12-step programs should stay away from it, because the bottle says it has “trace amounts” of alcohol in it, but it gives me that lovely warm fuzzy feeling in my neck and shoulders like when I have that first sip of a cocktail, so I can see how it would be dangerous for some people.

As far as exercise, I’m trying to ease off running until my foot feels better, so I’ve been doing the Betty Rocker 30-Day Challenge workouts. Some days I’ll do 2 of them back-to-back – for example, one of her ab circuits, followed by a “full body burn” cardio workout. Her workouts are short (about 15 minutes each), but they’re hard. It feels like enough to keep me active and not lose my endurance level while my body adjusts to this new eating routine.

I mean, I figure that if I can run for over 2 1/2 hours, I can certainly manage a 15-minute workout, even if I am suffering from the “carb flu.” (That’s not my term, that’s what the Whole30 people call the withdrawal symptoms that people go through when they cut out sugar and processed foods.)

So, 3 days down, 27 to go. Doesn’t feel unmanageable so far, but ask me again in a couple of days and I may have changed my mind.