Catie started second grade yesterday. It was weird for me, because I took her to her first day of kindergarten and first grade, but this past weekend was Dave’s weekend with the kids, so he took her to school on Monday morning.

Dave and I had met up with the kids last week for “back to school” night, so we both met her teacher already. He had texted me that he packed Catie’s lunch and walked her inside to make sure she found her classroom, and that she was totally fine when he left.

But even though I knew it was all ok, I just felt uneasy and worried all morning. I didn’t get to give her a hug and a kiss and send her off on her first day of a new school year, and that felt really weird for me. File under, things I’m going to have to get used to. (There’s a lot of those.)

I picked the girls up last night, and Catie didn’t have much to say about her first day (I got the usual, “it was fine” response). I showed her some of the online tools her teacher is using this year, which is new for us – there’s an online reading log where she can add in the books she’s read, and it gives kids little incentives/rewards on the website as they progress. (She chose a dancing lizard as her avatar. Because of course she did.)

Then she said, “You know the cool thing about [her new teacher’s name]?” (I’m about 99% sure she never told me that anything her first grade teacher did was cool or fun.)

It turns out that in first grade, when they had their assigned reading time, they had to sit at their desks and read quietly. Her new teacher has what he calls Crazy Reading Time – they can sit under their desks, on top of their desks, on his chair, wherever they want to go in the classroom to get comfortable and read. And you know? I’m going to call anything that gets Catie excited about reading time a HUGE win for us. So, hooray for the new teacher.

Also, one of her tutors is starting her freshman year of college, but asked if she can keep working with Catie after school a couple of days a week. Which is awesome, because Catie loved her and she really seemed to help a lot. She’s starting next week.

So, all good things there.

Last night, I had to wash the girls’ hair. (We usually wash hair every other night, give or take – sometimes they might go 2 nights if they don’t look greasy, or we might have to do it more frequently if they’ve gotten sweaty/stinky.) On hair wash nights, I bathe them separately because Catie prefers the shower, but Lucy is still scared of the shower. And really, with Catie I basically just stand there and supervise to make sure she rinses all the shampoo out, she does the rest herself. (Ways in which 7 year-olds are awesome.)

Normally during bathtime, I play music on my phone to keep them entertained. I did Lucy’s bath first, and she asked me to play the Frozen soundtrack. Which is pretty normal for us.

Then Catie came in and wanted me to play Lil’ Jon “Turn Down for What.”

It was just kind of jarring to go from Disney princesses to rap/dance music. And struck me as funny that there’s a huge difference in those 4 1/2 years between them.

Another random music thing: we were in the car and Christina Perri’s “A Thousand Years” came on the radio.

Ok, my little nerd. Way to take a romantic metaphor and turn it into a math equation. 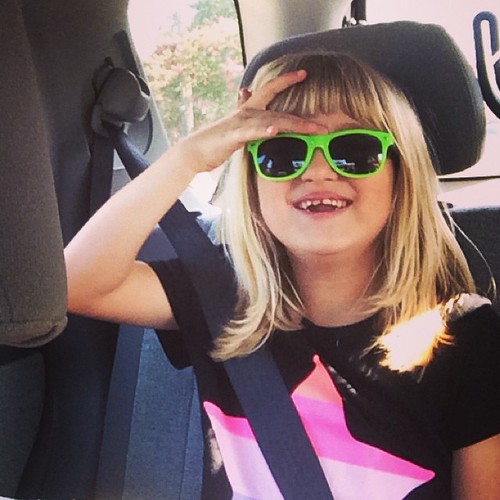 This morning, I went to give Lucy a kiss, and she wiped it off, and said, “Mommy! You have on lipstick!”

I hadn’t even gotten dressed yet, so I certainly didn’t, but I realized that it was my coffee breath that offended her. I laughed, said sorry, and kissed her again. She said, “STOP IT! I no like yucky kisses!”

Which of course led to me kissing her all over her arms and belly just to tease her and make her laugh. 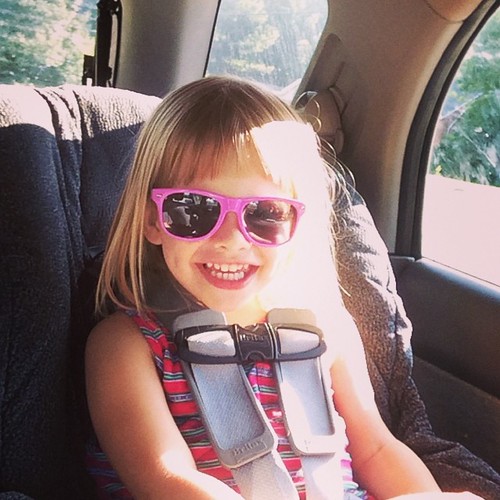 (Also, very grateful that Chris never tells me that my kisses are yucky. Although I guess I do normally brush my teeth or at least pop a mint or something before I kiss him.)

Thinking of dental hygiene: I took the kids to the dentist last week, and was texting Dave afterward to fill him in on what they recommended for the girls. It ended up with me making a completely filthy “spit versus swallow” joke and I realized that we really are pretty amicable with each other now. Which is definitely a good thing.

Or it could just be that I have the sense of humor of a 12 year-old boy sometimes. Either or, really.