I wasn’t sure how Catie would deal with the loss of Teenie. She’s known that cat her entire life. We talked for several days beforehand about how Teenie was very old and sick, and how it was almost time for her to go to Kitty Heaven. But I was dreading telling her about it when it happened. The poor kid has been through quite enough over the past year, she deserves a break.

She took it all really well at first. She knew it was coming, so it wasn’t a total shock.

But the next day, she walked into the room and said, “Mommy, I just don’t feel like myself without Teenie here.” I told her that I knew exactly what she meant. Then she burst into tears. There wasn’t anything I could do except hold her while she cried for a long time.

She asked if since Teenie had died, could she get a puppy?

I said no way, kiddo, sorry. Mommy is responsible for cleaning up quite enough poop around these parts. We aren’t adding a puppy to the mix.

She said, then can I get a hamster?

I said no, because hamsters stink and Mommy doesn’t want to clean its cage.

She said, then can I have a fish? 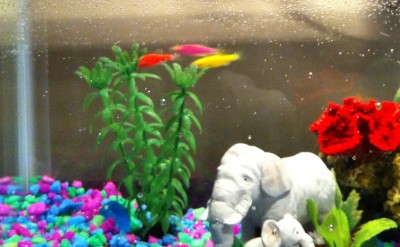 (See the 3 blobs at the top of the green aquarium plant? Yeah. Them.)

Their names are Mario, Luigi, and Yoshi. Catie named them herself. Obviously.

4 thoughts on “circle of life-ish (or live fish)”