I’ll write more about our weekend later (because man, it’s been a fun one), but forgive me here while I talk about buying a house and hopefully don’t bore anyone to tears.

Last week, Dave and I went house-hunting with our realtor again. I was trying not to panic, but it was looking like we were going to be homeless after July 31st unless we magically found our dream house. On Thursday, Dave had to work, so it was just me and Cara (our realtor friend) looking at houses, and pretty much everything we saw, I hated. A few of them were nice enough houses, but it just wouldn’t have been a good fit for us. Either they were too small, or they didn’t have any trees around (a pet peeve of mine; I hate it when neighborhoods are built and all of the natural foliage is cut down), or there wasn’t a place that we could’ve turned into an office for Dave, or the driveway was too hilly (visions of Catie in a few years learning to ride a bike and wiping out in the street = no thank you). There was always something that made it a no-go. So I was starting to get a little discouraged.

All of us (including Catie) went out house-hunting again on Friday morning. Aaaand now, it looks at though we’ve found not one but two houses that we really, really love. One house is in the perfect neighborhood and location, the yard is gorgeous, but the house itself has a couple of (really minor) features that I’m not crazy about (i.e., the pantry in the kitchen is really small). The second house is absolutely, 100% perfect, but I’m not totally in love with the neighborhood. I mean, it’s really nice, and it has a lot of great features (neighborhood greenway, pool, playground, etc.), the neighborhood just isn’t as aesthetically pretty as the first one. So, hmm, which to choose? Oh, and both houses are pretty much exactly the same price. Way to make the decision even harder.

Want to see them to get a better perspective of what I’m talking about? Of course you do.

This is house number one:

And this is house number two: 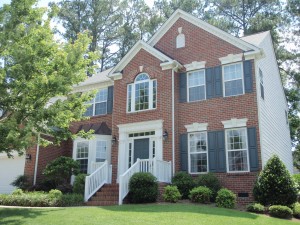 So, this afternoon we’re meeting up with our realtor again to look at both houses and try to do a side-by-side comparison of them. And as much as I hate making decisions, I’m feeling pretty good about this one, because I’m pretty sure that we’d be happy in either place. So I’m trying to relax and trust that God or the universe or whatever will make sure that we end up exactly where we’re supposed to be. Cross your fingers for us. I’d really like this decision to be made so I can start planning our next steps (like, you know, the actual move).