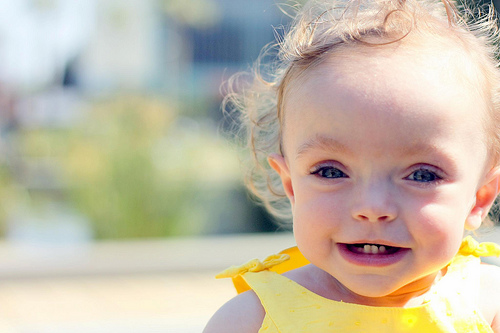 You would have been two years old today. 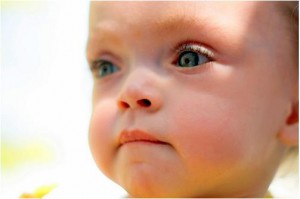 I’ve been thinking for the past few days about what I would write in this post, and I sort of had an idea in my head. Then I woke up this morning and read what your mom and dad wrote for you, and I realized that I’ve got nothing.

So I’ll just say that Maddie, we all miss you, and love you very much. The world is a better place because you were here, even though it wasn’t long enough. Not nearly long enough.

It’s strange how you get caught up in your daily life, vaguely remembering the day of the week, because you’re counting down to the weekend, but not stopping to think much about the date on the calendar. And then suddenly a particular date catches your eye, and it knocks the wind out of you.

Six months since the worst day of Heather and Mike’s life.

Six months since I turned my blog purple in her honor.

Six months since this community of bloggers organized teams across the country to March for Babies and raise money in Maddie’s memory.

Six months. Half a year.

Maddie, we miss you, and we love you.

To Heather and Mike, sending so much love to you and your family (and especially Binky), today and always.

Today is baby Maddie’s funeral. For those of us who can’t be there in person to support the Spohr family, we’re showing our support by wearing purple today. Would you believe that out of the 10,937 items of purple clothing that Catie owns, the only thing I could get her to agree to wear this morning is a wife beater with a sparkly embroidered kitty-cat on the front? (Note that I am totally doing the “hide my giant butt behind someone else” move here.) A lot of bloggers are doing a purple balloon release in Maddie’s honor. (If you watch this video and don’t tear up even a tiny bit? I’m not sure I understand you.) I thought about doing it, but it’s a really gloomy, rainy day, and I couldn’t think of anything more depressing than taking pictures of a purple balloon floating up toward dark gray rain clouds. So no, not doing that.

Heather and Mike, I hope you feel the love around you today, and I pray that you can find peace and comfort. That’s really all I can say.

Yesterday I wrote that post about Maddie being in the hospital, asking for prayers and well wishes. I was worried and a little freaked out, but I thought that surely everything would be alright. Maddie’s been in the hospital before, and she’s always pulled through. She’s a baby, for heaven’s sake. Bad things don’t happen to babies, right?

Unfortunately, I was wrong. Last night I was going to bed, and thought I’d check Twitter on my iPhone one last time. I hadn’t heard an update about Maddie for a while, and I was hoping to hear some good news before I went to bed. I saw an update from Heather, that just said, “Madeline.” It was followed by this link, and when I read the post that said Maddie had passed away, I sat up in bed and started saying, “Oh no, oh god no, oh NO.” I burst into tears, and ran downstairs to tell Dave. I barely managed to get the words out, I was crying so hard. I sat down at my laptop, left a comment on Heather’s blog and sent a few tweets about it, but I honestly can’t remember what I said because I was sobbing and shaking the whole time.

I just can’t wrap my head around it. This isn’t supposed to be the end of Maddie’s story. She wasn’t even 17 months old yet. We were supposed to be reading Heather’s blog in 4 years as she talked about Maddie’s first day of kindergarten. We were supposed to commiserate and laugh along with her in 12 years when Maddie became an insufferable teenager. This just can’t be right. Tragedies like this don’t actually happen to people in real life, do they?

I keep thinking of something I read once: that if you lose your spouse, you’re a widow or widower. If you’re a child who loses your parents, you’re an orphan. But there is no word in the English language for a parent who loses a child. I think that’s because the idea is just too horrible for us to comprehend. It goes against the way the world is supposed to work – the next generation is supposed to grieve the loss of its elders, not the other way around.

Last night when I finally tried to go to sleep, I ended up continuing to read the updates on Twitter, tears dripping onto my iPhone. I desperately wanted to go get Catie out of her crib and bring her to bed to sleep with us for the night, but I didn’t. I don’t remember what time I finally fell asleep. I slept horribly, I kept waking up and thinking about Heather, Mike, and baby Maddie. When Catie woke up, I heard her on the baby monitor, singing the theme song from “Thomas the Tank Engine” quietly to herself in her crib. I started to cry thinking about how lucky I was, and how unfair the world is sometimes. Heather and Mike don’t deserve this pain. Nobody does.

I am just devastated and gutted by this tragedy. It may not seem like much, but if you’re as moved by the Spohrs’ story as I am, please consider giving to the March of Dimes on Maddie’s behalf. They do a lot of work to try to help premature babies like Maddie. Here’s the link to Maddie’s MoD page. Rest in peace, baby Maddie. You’ve touched the lives of so many, even those who never got a chance to meet you.