I got an invoice this week to renew the registration of my blog, and I realized that I haven’t written anything here in… uh… *checks notes*… over 3 years. So, hello! Here’s what’s been going on over in my little corner of the world.

We’ve been living through a pandemic for over a year now! If you’re reading this in 2021, you already know that! And it has sucked so much! You probably know that too! Ok, let’s move on!

There are a lot of things that have happened in the last few years that I never blogged about, like: we bought a house! The kids all have their own bedrooms, the backyard is fenced for the dogs (yes, dogs plural, more on that in a minute), I have an office with doors I can close, it’s in a beautiful neighborhood close to a community park and the schools here are great. It ticked every box of everything I wanted in a house. It’s also come with challenges, like finding that we suddenly have to buy a new water heater or some other major expense, but overall it’s been great and I love it here.

Dave also bought a house less than 2 miles away, so we have a super easy commute getting Catie and Lucy back and forth between our houses, which has been really nice. He and I are still amicable as ever – honestly, we probably get along better now than we did when we were married. I like that we can get along and have an easy relationship with each other; I think it really reduces any stress or tension that the girls might pick up on.

Work has been awesome. I was moved to a different team, but the move makes more sense for me, and I really like my manager. I’ve now been with this company for over 10 years, and I can’t imagine that I could ever find a job that’s a better fit for me than this one. I’m really happy on that front.

The pet switch-ups: I think when I last blogged, we had adopted Fifi and Sunny as kittens, and we also had Roxie (the Yorkie). Sunny unfortunately passed away from a disease called FIP that’s 100% fatal in cats. We were devastated to lose her when she was only 2 years old. We’ve since adopted another cat, Toby, who is just about the greatest thing on four legs. He’s so sweet and cuddly and just a hilarious goofball of a cat. I mean, look at this face. 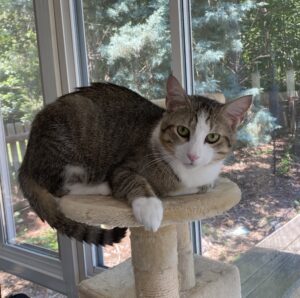 We got him from the same rescue where we adopted Fifi and Sunny. They got him from a kill shelter where he’d been dropped off when he was 2 years old. I cannot fathom how anyone can interact with this cat and not immediately fall in love with him, so I don’t understand why anyone would ever surrender him to a shelter like that. I wish I knew more about his backstory, but the most important thing to know is that he’s ours now, and I absolutely adore him. I’d adopt 5 more cats if they were all like him.

As for the second dog: my stepdaughter, Olivia, found a beagle who’d been dumped on the side of the road, she was skin and bones at the time. Olivia brought her to us, and we thought that since she was so old, nobody else would ever adopt her, so we’d just keep her, take care of her, and give her a happy end to her life. We thought that maybe she’d live a few months at most. That was 2 years ago. 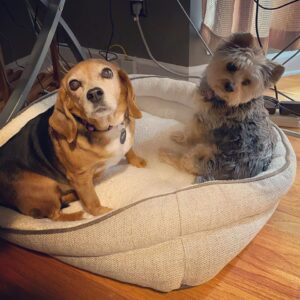 So that’s how we got Ada. She and Roxie get along great, which is surprising because until Ada came along, Roxie hated all other dogs. Ada is as dumb as a bag of hair, but she’s very sweet and just wants love and treats. We have no idea how old she is – she only has a few teeth left, she has cataracts and arthritis, she coughs all the time because she’s got congestive heart failure, but she keeps trucking along. She’s the age where the vet just shrugs and says, “Your guess is as good as mine.” We have a lot of jokes about how old Ada is – like: before us, her previous owner was a guy from the Old Testament named Methuselah. Or that she used to hang out with dinosaurs. And at the rate she’s going, she just might out-live us all. She’ll be hanging out with Wall-E after all the humans have vanished off Earth.

Because of her arthritis, she can walk around the house and to the backyard to do her business, but she can’t walk long distances on a leash. The pandemic meant that walking was our only escape from the house, so that’s how I justified making an insane purchase like a dog stroller. 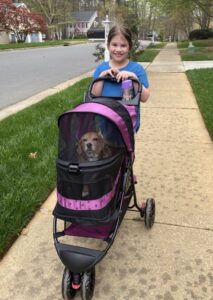 My logic is that maybe she can’t walk very far, but she still likes to be included when I walk Roxie? She genuinely does seem to enjoy her little rides. I’m sure that I’m now known as the Crazy Dog Stroller Lady to all my neighbors, but all little kids we pass seem excited to see her. I figure the fresh air is good for her, and pushing a stroller with a 22-pound dog in it adds a little bit of an upper body workout to my walks, especially when we go up hills. (And our neighborhood has a LOT of hills!)

So that’s four pets we have now: two dogs and two cats. I think we’re good with that. It feels like we’re maxed out.

As for the four kids, there have been some pretty huge changes on that front. I’ll go from youngest to oldest:

In other news, Chris and I had our 9th anniversary a couple of weeks ago (of dating, not marriage – it took us over 5 years to decide to get married). I still think he’s the greatest guy in the world for me, and he seems to still like me despite the fact that I do things like impulse-buy a stroller for one of our dogs. So we’re pretty great.

It’s starting to look like there’s a light at the end of this pandemic. Chris got his second COVID vaccine today; I’ve had my first dose & I get my second in a couple of weeks. Our parents are all fully vaccinated now. It’s starting to feel, dare I say it, almost hopeful? There are so many things I want to do when this is over: host sleepovers for the kids, go on road trips, take honest-to-God/leavin’-on-a-jet-plane vacations, down to simple things like having my parents over for family dinners. Hopefully we’ll be able to do all of that really soon. Fingers crossed.