I haven’t blogged in 2 months, which is weird for me. I keep thinking of things to write about and then I get distracted. So, here’s a bunch of random stuff that’s been happening lately.

We’ve been doing fun stuff on the weekends the kids are with me – now that summer is over and the neighborhood pool is closed, we’ve been going to the science museum and the playground more often. 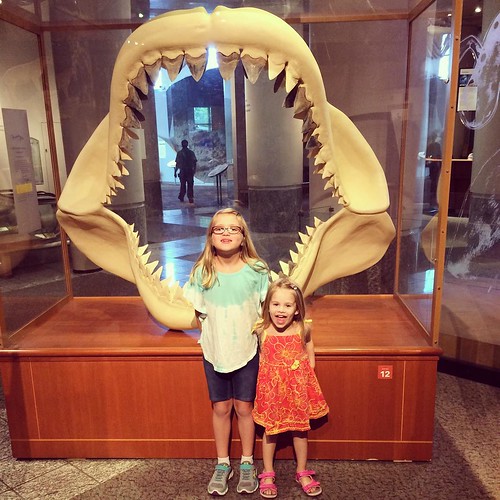 Those giant indoor trampoline places are fun on rainy days, too. 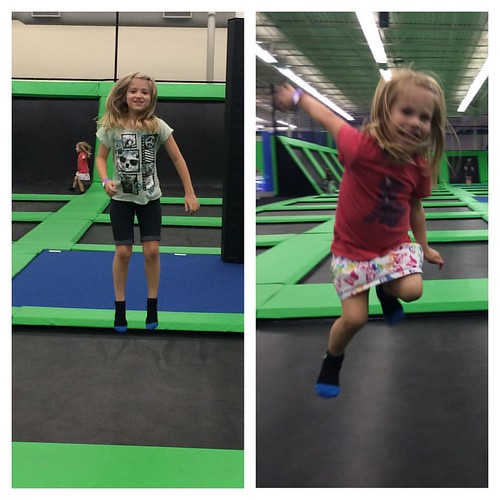 I try to keep us busy on the weekends, it keeps the kids from fighting if we get out of the house and do active stuff.

Catie finished her first term of 3rd grade and she’s now on her 3-week track-out break. (Let me take a moment and say again how much I love year-round school. Just around the time they start to get burned out on school, they get a nice long break. And then, just when they start to whine about being bored: time to go back to school!) She’s been spending this track-out break with her cousins; my aunt Susie is in town taking care of my cousin Cat’s kids, so I’ve been dropping her off every morning at their house and she’s been having a blast.

Third grade has been interesting because the two teachers split the day – one does math and social studies, the other does reading, writing, and science. So the kids spend half their day with each of them. Catie seems to like both teachers this year, which is pretty lucky.

Oh, and Catie got new glasses. She picked them out herself, and they look fantastic on her. 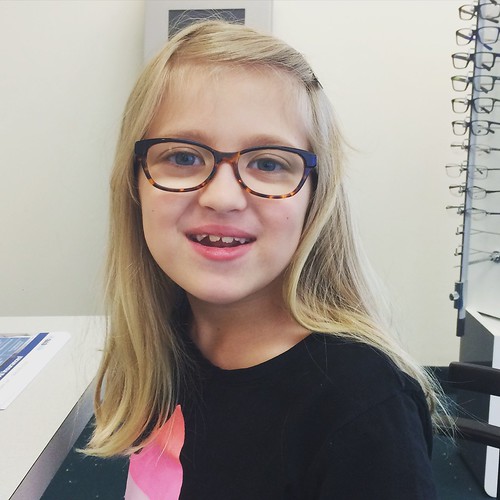 Catie’s eye doctor is concerned about one of her eyes being significantly weaker than the other, so she’s now wearing an eye patch. She was upset about the idea of wearing it to school, because third grade girls can be mean about teasing, so I relented – she wears it from the time she gets up in the morning until she leaves for school, and then from the time she gets home until bedtime. She has it on for several hours each day, and hopefully that’s enough. We have a follow-up appointment in December to see how much progress she’s made.

And because she was constantly complaining about how her hair was making her hot, we decided to cut off several inches and give her a bob. 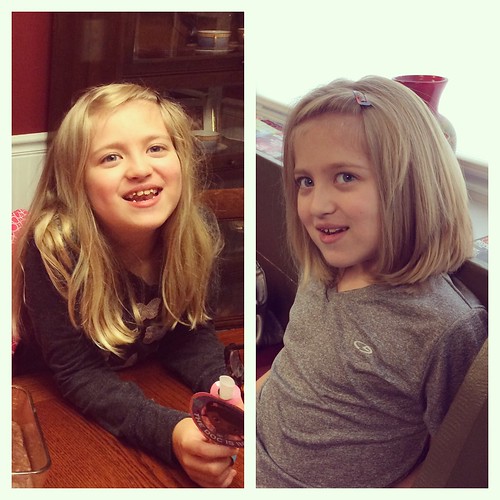 She looks adorable, I absolutely love it. Between the haircut and getting her bangs off her face (both girls are growing their bangs out), she suddenly looks so grown up. Although maybe that’s partly due to her recent growth spurt. Girlfriend is now 4’5″ – she’s grown over 2 inches in the last 6 months.

Lucy has started taking a weekly dance class at her daycare, and I wish I could spy on it because I’ll bet it’s adorable. They email a newsletter to talk about the stuff they’re doing in class, so I’ll ask her to show me something (like pliè and relevé), and it’s a riot.

She also takes a weekly soccer class at daycare, which she really likes. I’m glad our daycare has these types of extracurricular activities, because I’m not sure how we’d make it work on our own time. 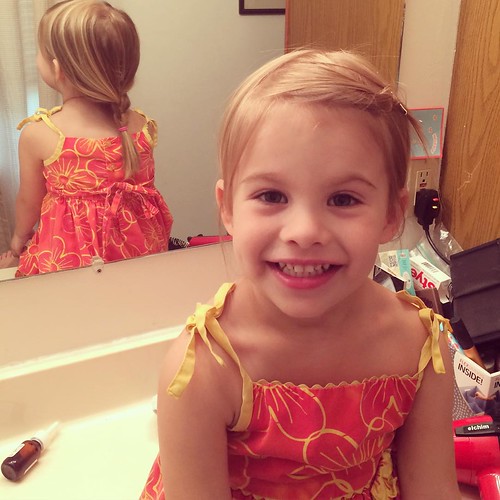 She’s gotten to a phase where she’s suddenly shy around new people, and her daycare teacher even says that she’s one of her quiet kids, but when she’s home, she’s still my hilarious little goofball.

I had a rough few months over the summer – there wasn’t any reason for it, just out of the blue I was suddenly anxious and jittery more often than not. It’s gotten a lot better in the last few weeks, for which I am thankful.

I’ve also been enjoying my weekends when the kids are with their dad. I get to sleep late, Chris and I can go see a movie or go out for dinner whenever we want, without worrying about anyone’s schedule. Yesterday, the weather was so gorgeous that I ran for nearly 5 miles, which is the first time I’ve gone that far since the half-marathon back in March. The combination of an injured foot plus the summer heat made me scale back on running, but I’m getting back into the longer distances and really enjoying it. I’m also doing the Barre3 28-day challenge with some friends, which is kind of fun just as a way to mix things up.

Work is good; I had my annual performance review a couple of weeks ago, and I got a raise. I asked Chris if it made him feel emasculated that I now make more money than he does. He laughed and said, “Sweetie, you go ahead and make aaaaall the money you want, the more the merrier.”

Today it’s been 3 years since my divorce. I don’t think I would have remembered it, except the Timehop app on my phone reminded me. It made me think of this conversation I had with Lucy a few weeks ago:

Catie was with my parents, and I went to pick up Lucy from daycare. We were leaving when we saw a man waiting in a car in the parking lot. I recognized him as one of the teacher’s husbands – they only have one car, so he drops her off and picks her up.

Dave and I split up when she was only 2 months old, so of course she has no memory of us ever being together. And I guess in one way, it’s sad that she had no idea that was where she came from. But at the same time, I’m relieved that her only conscious memory of her parents is the two of us as friendly co-parents. We could’ve done a lot worse. 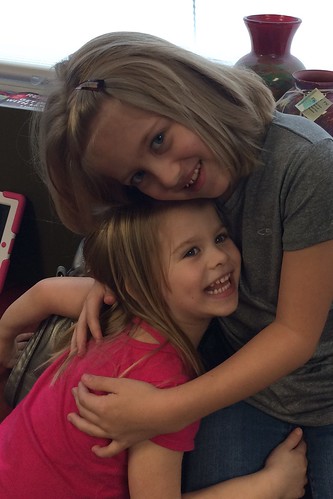 Because these two kids? They’ve turned out pretty spectacular so far.

One thought on “the past 2 months”