So, this has been Catie’s “buying her lunch as punishment for not eating her packed lunch” week.

Monday, she said she liked her lunch. When asked what she ate, she said, “A banana and something made of meat.”

‘Something made of meat’? More questions were asked. It wasn’t a hamburger, or meatloaf, or spaghetti and meatballs.

I looked up the school lunch menu (they have it in PDF format on the school district website), and saw that one of the options available that day was “breakfast for lunch.”

Was it a sausage biscuit?

“Oh! Yeah! I think that was it. Is that the meat circle thing?”

Tuesday, she skipped the main course because “I don’t like their chicken nuggets,” and she ate mashed potatoes and a side of fruit.

Wednesday, she insisted she ate fish sticks, except for the small issue that fish sticks weren’t on the menu that day. They had fried mozzarella sticks (which Catie has never eaten, but they are shaped like fish sticks, and I can see how she’d mistake one for the other). Upon further questioning, she admitted that she “ran out of time” and didn’t actually take a single bite of the that’s-not-really-a-fish-stick. So she ate fruit salad and a cookie.

The main frustration with all of this school lunch business – besides the wasted food – was that she’d eat so little that her blood sugar would drop and she wouldn’t be able to concentrate on her school work. But even though it seems like she’s eating very little of her lunch, she’s still getting a lot of marks for good behavior this week. Maybe because she’s buying milk with her school lunch instead of bringing ice water in her thermos, and the milk has enough protein to sustain her a little? Who knows.

She seems ok with the school lunches, so maybe we’ll just stick with it. I haven’t decided yet.

Still: meat circle. I may never stop giggling about that one.

Meanwhile, across the street over at daycare, I’m not exactly sure what’s going on in Lucy’s class.

For a long time, there were only 4 or 5 kids in Lucy’s class, and it was the same kids she’d been with since she was a baby. They’ve recently gotten a few new kids, which is great for the daycare center, but weird that I no longer know every kid in her class by name.

The past few weeks, Lucy has been telling me about a little boy who I’m going to call J. Three year-olds are tattle tales, and Lucy would tell me every day about how J got in trouble for one thing or another. J hit so-and-so and had to sit in time-out, J ripped the pages out of her book that she brought to share at Circle Time, “J said ‘shut up’ and that’s not a nice word!,” etc.

After talking with one of the teachers, I found out that J is not even 3 yet, but they moved him up to the 3 year-old class because he was “too rough” for the other two year-olds. I guess they thought the older kids would put him in his place, or at least be harder for him to injure.

On Tuesday, when I picked up the kids, I noticed Lucy had a red mark on her cheek, under her eye. I asked her what happened, and she told me that J hit her in the face with a book.

Normally, if a child gets hurt at daycare, the teacher writes up an “incident report” for the parent to sign. I’ve had to sign them when one of my kids has, for example, fallen down on the playground and skinned their knee. But they’re also written up if a child hurts another child – I’ve had to sign them for Lucy when she was both the victim and the aggressor. (Nothing more embarrassing than the report that says, “Lucy and another child were fighting over a toy and Lucy bit the other child on the arm.” Fortunately, we’ve had none of those in at least 6 months, so I’m going to file that as a Terrible Twos thing and assume she’s outgrown it.)

There was no incident report for the mark on Lucy’s face, but her teacher is new and has only been working at the daycare center for a couple of weeks, so I figured that maybe she doesn’t know the procedure yet. I made a mental note to talk to her about it the next day.

That night, my parents came over for dinner. We were just sitting down to eat, and I was helping Lucy into her high chair, when this exchange happened.

Me: “Oh yeah? What did he say?”
[IN MY DEFENSE, I was thinking she’d respond with something like “shut up” or “dumb,” which are the types of things my kids think are bad words. One time she said the bad word he said was “dude.” Which, depending on context, I can kind of see how that might be disrespectful? But no, dude isn’t really a bad word. So I really wasn’t expecting her to say anything particularly offensive.]

This is more or less the face my parents and I made in response.

Catie then piped up: “What does ‘bitch’ mean, anyway?”

I could tell by my dad’s face that he didn’t approve of any of this, but I tried to keep my voice very calm and even, as I explained that technically, bitch is a word for a female dog, but that people use it when they’re name-calling, which is why it’s a bad word, because we don’t call people names.

Catie said, “So you should call it the b-word, sort of like the s-word, right?”

(I found out later that Catie thinks the “s-word” is “stupid.” This is a child who has heard me drop things and mumble “shit” under my breath probably a million times in her lifespan, but she thinks stupid is the one that’s a bad word. And you know? Shit is just another word for poop, and it’s relatively harmless on the curse word scale. Stupid is usually used to hurt someone’s feelings, and that’s never ok, so I’m fine with that being “the bad word” of the two options in my house.)

Turns out, this little boy J was not just saying “bitch” for the sake of saying it, he actually called a little boy that name, and yeah, I’m definitely not ok with the name-calling thing. I know the teacher is new, but my kids have been at that daycare center for years, and I know the director fairly well, so I stopped by her office to talk to her the next morning. She knew about the “bitch” incident, and had already spoken to the child’s parents. So, that’s good, I suppose. Although, really, how do we think this little boy learned to call someone else “bitch”? I’m guessing it’s from the parents and they aren’t letting their toddler watch Breaking Bad. 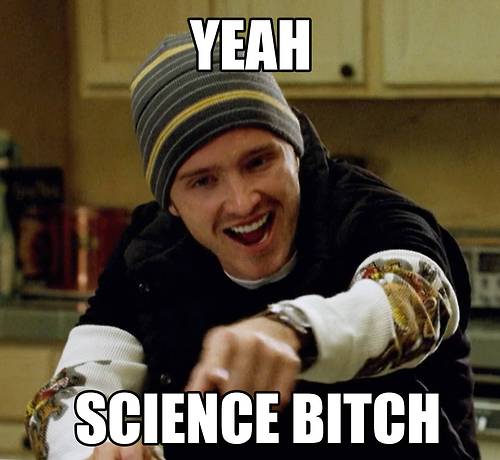 (Not that a toddler-size Jesse Pinkman wouldn’t be completely adorable, but I wouldn’t want my kid to hang around him either.)

The director was also upset to hear that Lucy had been hurt and there was no incident report, and said she’d make sure to talk to the teacher about it.

I feel a little better knowing that she’s on top of it, but still uneasy about this little boy J, which is sad, since he’s, you know, TWO.

On the topic of the new daycare teacher, I’m not sure how long she’s going to be around, because besides things like “injured kids going unnoticed on her watch,” it seems like she may have some other personal problems.

Last night, Dave picked up the kids and texted me later, “So apparently Ms D [note: not her real name] is in the midst of some serious relationship shit.”

I asked what he was talking about. Last night, Lucy forgot her jacket, so they went back to get it out of her cubby. All of the other kids were gone, but the teacher was on the phone with her significant other (not clear if it’s a boyfriend, husband, or what) and they were having a very loud verbal fight. Dave said the most awkward part was that he was trying to rush Catie and Lucy out of the room to give her some privacy, but that they insisted on putting on their jackets while still in the room. He said the phone call ended with her screaming that she wouldn’t be coming home tonight and hanging up.

I mean… hey, these things happen, I guess? But maybe not when you’re at work? At least take the call outside, or go sit in your car or someplace where others won’t overhear you?

Side note, though, it does make me happy that Dave and I are amicable enough now that we can let each other in on the latest daycare gossip. So yay for us, Post-Divorce achievement unlocked. (Thanks, Tracy, for that one.)

One thought on “meat circles”