My kids are living proof that you can do the exact same thing with both kids, and whether a child is a “good eater” or a “picky eater” is a total crapshoot. I did nothing different between my two girls. Lucy will eat pretty much whatever I put in front of her. Meanwhile, if left to her own devices, Catie would prefer to live on nothing but fruit and empty carbs.

I hear some parents (and “parenting experts”) argue that you should never prepare different food for your child, they should eat what you eat, and if they refuse, they should just go hungry. And that if a kid refuses something at one meal, it’s re-offered at the next meal, and the next, until they concede and eat it.

I would like to invite any of those parents to spend a week with Catie. She will go hungry until her blood sugar bottoms out, and then she turns into some sort of Demon Child, and you know what? It’s NOT WORTH IT.

So yeah, I am the mom who makes alternate meals. We’re going to have steak for dinner? Catie doesn’t eat steak, I’ll make her some fish sticks. Or: oh, I was going to roast some asparagus as our vegetable, but she hates that, so I’ll heat up a can of green beans for her. It takes maybe a couple of minutes of extra planning, and it saves me hours of whining and tears. I’m ok with the trade-off.

As a general rule, I think our society is too obsessed with food, to the point where people use their diet as part of their self-identity. Vegetarian, gluten-free, whatever. There is more to you as a human being than what foods you do or do not choose to shove in your mouth.

So I don’t think the big food battles are worth it. We’ve found enough compromises of things that Catie will eat, and she more-or-less gets a balanced diet, so I don’t stress about it that much.

Except! When it comes to school lunches.

I’ve blogged about this once before, over a year ago, and some of you guys had really great suggestions and comments about options to try. And I’ve tried a lot of your ideas. For one reason or another, they’ve all failed for Catie.

Dave and I have texted about this a lot, now that the kids go back and forth between our houses. We’re both frustrated with Catie bringing home most of her lunch uneaten, and wasting so much money on food she doesn’t touch.

At some point, she told Dave that she hates all sandwiches except for chicken sandwiches, “like the kind at Chick-Fil-A.” We went back and forth about this for a while, and decided ok, let’s go with that. We each stocked up on buns and frozen chicken patties. Every morning, heat up the chicken patty in the microwave, put NOTHING on the bun (Catie is staunchly anti-condiments), wrap the sandwich in foil, then put that inside an insulated sandwich bag so it stays warm.

And for a few weeks, it worked. I’m not sure if she got bored with it or if she decided that she doesn’t like chicken sandwiches all that much after all, but lately the chicken sandwich has also come home uneaten. She eats everything else in her lunchbox (2 types of fruit, crackers, some type of treat – usually a York peppermint patty or something), but not the sandwich. She’ll take maybe two bites of the sandwich SHE SPECIFICALLY REQUESTED.

(A couple of friends said that if their kids do this, they’re given the food they didn’t eat as their after-school snack or dinner. I don’t think I can pull that off, since Catie goes to daycare after school, and I don’t pick the girls up until 6:00, by which point I already have dinner planned. I usually don’t think to even check her lunchbox until long after dinner.)

Yesterday she didn’t even take a single bite out of her sandwich, and when I got mad, she said, “It wasn’t my fault! My friend [kid’s name] distracted me and I forgot!” Right. Ok.

When I try to get her to talk about what type of food she DOES want in her lunchbox, she gets angry, defensive, and accuses me of “making her nervous.”

After her one of her rants about how she hates sandwiches, I asked her, “What do the kids who sit by you bring in their lunchboxes?” She said all of them buy lunch at school instead of bringing them.

I said, “Well, why don’t you try buying your lunch then?” (Note: she bought her lunch one time, when she was in kindergarten.)

“What food was that?”

“CHEESE!” *big eyes as if I should recoil in horror at the thought that someone dared to put a piece of string cheese on her plate*

But, you know, after all of these arguments, and all of the wasted food and money, I’m just done. And so is Dave. So she’s buying her lunch next week as a punishment for not eating her packed lunch.

I figure we’ll have one of two outcomes:
1) She’ll realize that she has it pretty good with her custom-made-for-her-picky-taste-buds lunchbox, or
2) She’ll decide that school lunches are awesome, and we can stop fighting about it.

Meanwhile, this morning I asked Lucy what she wanted for breakfast, and she said, “BROCCOLI!” 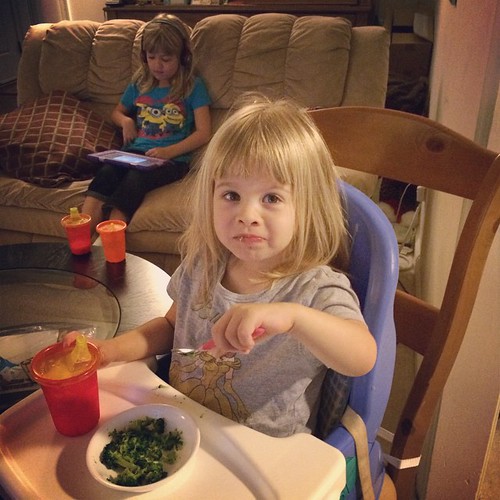 Aside from the fact that it’s not a traditional breakfast food, I couldn’t think of any reason to say no. So ok, strange little girl, here’s your broccoli. She ate two bowls of it.

I don’t even know. Kids are so weird.

6 thoughts on “the picky eater”