So. The past few days. Where to start?

Ok, backing up a bit: Target had this deal that if you spent $75 on Black Friday, you’d get a coupon for 20% off at a future shopping trip (the coupon was good from 12/1 to 12/7). I generally avoid shopping on Black Friday because that much open hostility among my fellow shoppers makes me nervous. 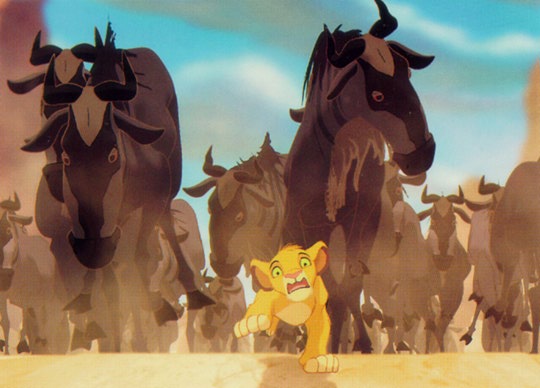 What I imagine Black Friday shopping looks like. I would be Simba in this scenario.

Chris had hit up Target on Thanksgiving night to get some Christmas stuff for his kids, so he told me about the coupon deal. I went to Target on the night of Black Friday – long after the crazy storm of shoppers had looted the good deals and the crowd had died down – and dropped $75 in about 5 minutes. I mean, really, two big boxes of diapers is $50. Add in some eye drops and a bag of cat food, and I was basically done.

So, I had this 20% off coupon. And I also have a Target Red card so I get an extra 5% off when I shop at Target. And 25% off your entire purchase is a really good deal, right?

Last week, I cleaned out my garage and dumped two carloads of stuff at Goodwill. Then, Saturday night, I got my parents to watch the girls, I borrowed my mom’s minivan, and Chris met up with me at Target (because this was going to be a BIG trip and I needed help juggling multiple carts). We joked that our “date night” was going to be at Target, and that’s basically what it was. We met up at 8-ish on Saturday night, and we were there until the store closed at 11:00 p.m. 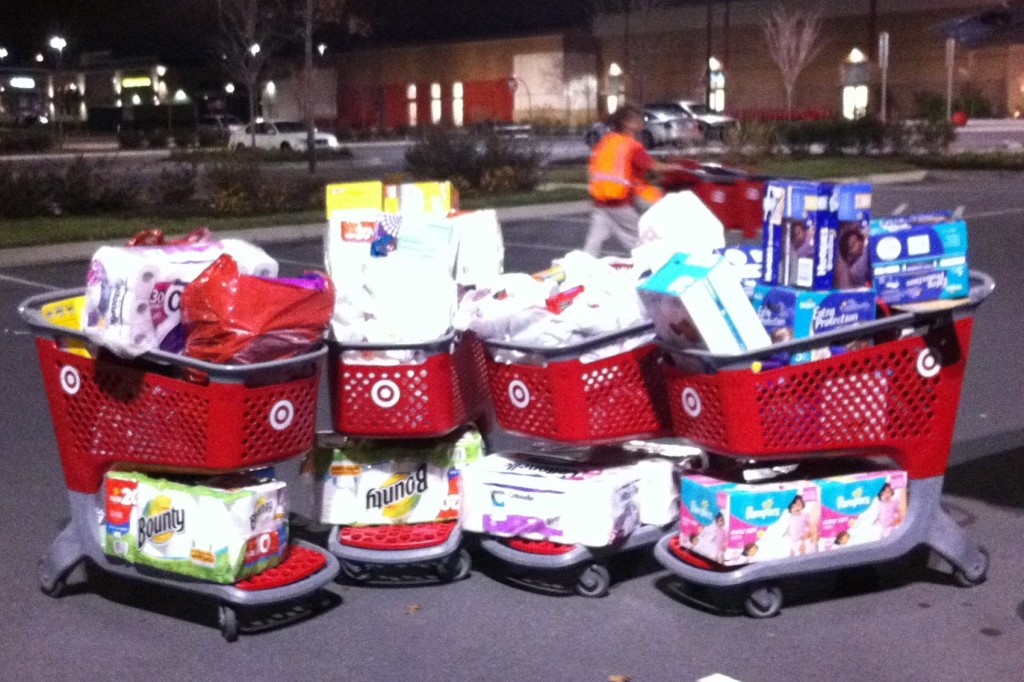 I basically have enough diapers and Pull-Ups to get Lucy the rest of the way through potty-training, and probably at least a year’s worth of paper towels, garbage bags, detergent, and toilet paper… all things that I can store in my garage and not worry about any of it going bad.

I have never shopped like that in my life.

And as much as I love shopping at Target – and I do, I often refer to Target as “my happy place” – after 3 hours there, I was done. Chris was double-checking the list and going, “wait, do you want to get a couple more boxes of cat litter?”

And I was all, “No. I’m tired, I’m hungry, and I’m thirsty. Six boxes of cat litter is enough. I wanna go home and lie down now.” 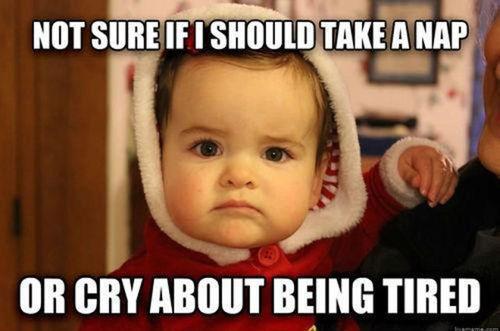 Safe to say that the extra bit of money I had put aside in my budget for Christmas expenses is pretty much gone now. And this little shopping trip was (obviously) after I got the girls their Christmas presents. I still have a little wiggle room in my budget for teachers’ gifts and whatnot, so it’s ok and we’re fine. But still, damn, that was a lot of money all at once, even with the 25% off.

But hey, if the zombie apocalypse happens to hit in 2014, I am going to be SO prepared for it.

Stop by my place if you need me to wash your clothes during The Rapture. I have plenty of detergent hanging out in my garage.

On Sunday, Catie was whiny and clingy and generally not acting like herself. We were out running errands on Sunday afternoon, and she fell asleep in the car, which really should’ve been a red flag, since she never naps anymore. Chris carried her into the house (I carried Lucy, who had also fallen asleep in the car), and she slept on the couch for another hour.

When she woke up, she said she wasn’t feeling good. I checked her temperature and it was 99.6. I gave her some Motrin, and she seemed to perk up and feel ok after that.

After her bath, though, she was freezing cold (even with the space heater in the bathroom) and couldn’t stop shivering. She got under a fleece blanket on the couch and her teeth wouldn’t stop chattering.

I checked her temperature again. It was 102 degrees. Crap.

I kept her home from school on Monday, and she lay on the couch and moaned pitifully and watched TV while I tried to work. (If you’ve ever tried to write a software manual while listening to “Star Wars Episode III” in the background? Hats off to you, because that crap is impossible.) The only time she left the house was when she put on her shoes and coat with her PJs because we had to take Lucy to/pick Lucy up from daycare.

She still had a fever of 101.7 this morning, so I kept her home again. And she threw up in the driveway when we were leaving to take Lucy to daycare. It wasn’t much, I think she just drank some water too fast. And really, it’s raining today, so of all the places she could’ve barfed, the driveway was kind of an optimal location from a clean-up perspective. (God, my neighbors must love me.)

My mom brought me these gel pack things that are supposed to help bring fevers down, so I put it on her after we got home from dropping off Lucy. 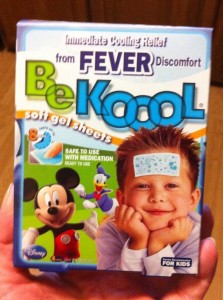 I had never heard of these things before, but I swear, they really work. Within 20 minutes, her fever had come down, she was eating, and she was obviously feeling better because she was talking my ear off. So I’ll be stockpiling those gel packs for future reference. They’re amazing.

Fingers crossed that she’s well enough to go back to school tomorrow, and that nobody else in this house catches her germs. We were all sick last Christmas, I don’t need a replay of that.