So, yesterday. Oh man, where do I start?

(Be warned, this is a long story.)

Yesterday started off as a good day. Got the girls off to daycare with no problem, I was able to squeeze in a run during my lunch break, I was really productive with work, etc. All good stuff.

Then it started to go south.

I was supposed to pick Catie up from daycare early to go on a tour of her new kindergarten. She doesn’t start for a couple of months, but she’s been a little anxious about the idea of kindergarten, so I figured that maybe checking the place out would ease some of her worries.

I had a work conference call come up, which I absolutely could not miss, and of course it conflicted with the time of the kindergarten tour.

I called my mom in a panic. She said not to worry, she’d pick Catie up early and they’d go to the local garden center together, to distract her.

(Side note: Catie is currently obsessed with helping my mom with her flower beds. They work in the yard together all the time. It’s completely adorable. Maybe the green thumb gene skips a generation, because lord knows I don’t have it.)

I was stuck working until late, but my parents had both kids and said they’d feed them dinner, so I was fine. (Hooray for grandparents!)

I wrapped up work around 6:30 pm and headed over to their house. As soon as I pulled up in their driveway, I burst out laughing, because this was in my mom’s front flower bed: 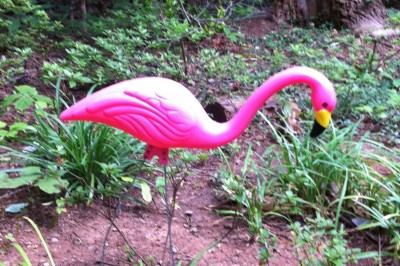 Without even asking, I knew it meant that Catie saw the lawn flamingo at the garden center and begged my mom for it, and she caved.

I went inside still laughing, and my mom said, “Oh no, that’s Catie’s flamingo. She’s taking it home with her. She wants to put it in your yard.”

Umm, are you kidding me? Have you SEEN my house? I basically live in a pastel blue Easter egg. 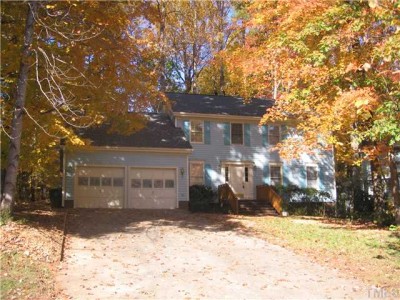 Apparently the landlord is a big UNC fan. I don’t know.

I mean, I don’t particularly care because it’s a rental and it suits my purposes, but let’s be honest. I live in the eyesore of my neighborhood. And now I’m going to make it even tackier by putting a pink flamingo in the yard? HELL NO.

Then Catie starts in, “But I named him Mango and I LOVE him! He HAS to come home with us!”

I must admit, Mango is kind of an awesome name for a flamingo, even though it makes me think of Chris Kattan. 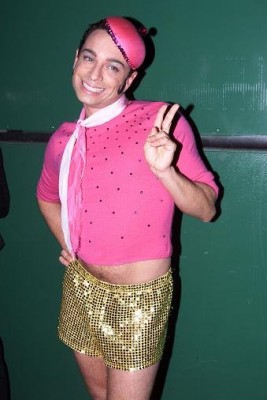 Yep. Perfect name for a flamingo. You win, Catie.

We compromised and decided that the flamingo could live in the backyard, where it’s kind of woodsy and he wouldn’t offend all of the neighbors.

So, I load up the girls and head home. Lucy was starting to get a little fussy, and my parents had mentioned that she hadn’t eaten much, so I plopped her in her high chair and put a snack on the tray for her.

Then I went into the backyard to set up Mango the Flamingo’s new home.

Catie saw me and said, “Wait, Mommy, I want to come with you!”

She came running behind me, and pulled the back door closed behind her. I didn’t realize it because I always use the deadbolt locks on my doors, but somehow the doorknob lock had gotten turned, so when Catie closed the door? She locked us out of the house.

And Lucy was still inside. So was my cell phone.

Once Catie realized we were locked out, she burst into tears. I told her to calm down and I ran next door. My neighbors weren’t home.

I knew I needed to run, and I knew that a sobbing and hysterical five year-old was only going to slow me down. I told Catie to stay right there in the driveway and not move. I sprinted (like, I have never run that fast in flip-flops in my life) across the street. Those neighbors weren’t home either. Dammit.

So I ran to the house next to them. It’s a very nice older lady who lives there who has tried to sell me Avon stuff a couple of times. I was like, “Uh, hi, I live across the street? And my 5 year-old locked us out of the house? And my baby is inside? CAN I PLEASE USE YOUR PHONE?!!”

She let me in and handed me her phone. I called my parents and sort of shrieked out enough key words that my mom understood. (Something like: “LOCKED OUT LUCY INSIDE NEED EXTRA KEY COME NOW!!”)

I thanked my neighbor profusely and went back to my house. Catie and I sat on the front steps. And thank God my parents live so close by and were able to come quickly, because this was probably the longest five minutes of my life. Catie was crying and saying, “I’m so sorry, Mommy! Poor Lucy!!”

I tried to calm her down by telling her that it was ok, it was an accident, and Lucy was ok, she was safe in her high chair, so she wasn’t going to get hurt, and she’d be ok for a few minutes until Pop-Pop could come unlock the door for us.

Meanwhile I could hear Lucy inside, screaming her head off because she realized pretty quickly that nobody was around. That damn near ripped my heart out.

I felt like I was on the verge of a panic attack during all of this, but I also knew that I had to keep it together. What other choice did I have?

My dad pulled up in the driveway a few minutes later and threw me his keys. I ran to the door and rushed inside to get Lucy. She was so distraught, she wanted absolutely nothing to do with me, she only wanted my dad. (She’s in a very Pop-Pop-obsessed phase right now.)

Unfortunately, my dad had only come to unlock the door and still had to go back home. As soon as he handed Lucy back to me, she started screaming all over again.

Catie, Lucy, and I headed upstairs, walked into the bathroom, I flicked on a lightswitch… and a fuse blew and all of the upstairs lights went out.

Son of a bitch.

Back down the stairs. I set Lucy down on the playroom floor, which made her SCREAM like I was cutting off an appendage. I told Catie, “Just hug and kiss your sister for just a minute!”

I ran to the garage and flipped the circuit breaker to get the lights back on, then started the whole bathtime process all over again.

Lucy never calmed down during any of this. She basically spent the entire evening looking sort of like some variation of this. 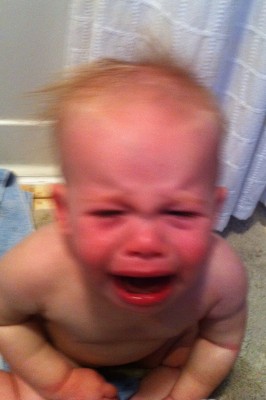 Seriously. It was a bad night.

Finally, I got them bathed, PJed, and back downstairs. Catie scampered off to call Dave on her iPad to tell him all about the evening’s dramatics, while I fixed Howlin’ Baby Lucy a bottle.

She was asleep after about two gulps on the bottle. Poor thing had screamed herself hoarse and was completely exhausted. I didn’t hear a peep from her until 8:30 this morning.

Later, I got Catie to bed, took a Klonopin, and watched the finale of Dancing with the Stars.

Moral of the story?

Get one of those “hide-a-key” things and keep a spare key outside of your house because MY GOD.

9 thoughts on “learn from my mistakes, people”