This is one of those random “nobody cares about my dreams, I know, but I swear this one is funny” asides:

I dreamed that I was accused of murder. I was innocent, but there were a couple of dead bodies in my yard, so obviously I was the natural suspect.

Rather than stick around to clear my name, I ran away and started working for the Mafia. You know, as you do. They had me manage a restaurant that was part of some scam operation.

Then, I left the restaurant after working my shift there, and I was picked up by my boyfriend, Alice Cooper. 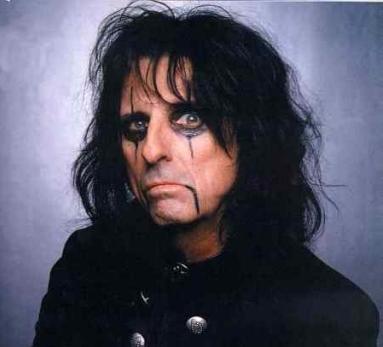 He took me purse shopping. Turns out Alice Cooper has fabulous taste in handbags. Who’d have guessed, right? But he picked out a purse for me that was, like, the most perfect purse I had ever seen in my life. And I thought how cool it was that he totally got me and my taste, and what a great boyfriend Alice Cooper was.

Then I woke up. End scene.

Ok, here’s a weird story and I’m looking for opinions on how to proceed, because I have no clue.

I’ve been doing this online dating thing, right? And most of the time, for first dates, I’ll meet a guy for coffee or lunch during the daytime, because the kids are already at daycare and that way, I don’t have to pay extra for a baby-sitter. Let’s be honest, the vast majority of first dates will never evolve into second dates, and I don’t see the point of spending money on a sitter unless I know the dude is worth it.

So, this guy contacts me and asks me out. He seems nice enough and fits my basic requirements, so I agree to meet him for lunch.

He shows up, and it turns out, he’s in a wheelchair. There was no mention of it in his profile. That’s… a little weird, right?

I tried not to look surprised and just go with it. I didn’t ask any questions about his handicap, because he didn’t mention it and it seemed rude to bring it up. We had lunch, and he seems like a perfectly nice guy, but I didn’t get any “spark” or anything like that from him. And I don’t think that had anything to do with the wheelchair, I think he’s just not really my type. He comes off as a little conservative and uptight, which is not generally what I gravitate toward.

But then, he texted me later to ask me out again, and I have no idea to respond. Is there anyway that I can say “no thanks” and NOT sound like a totally superficial jerk?

I talked about this with a friend, who seemed to think that I should be angry about the misrepresentation, and that his lack of mobility should’ve been clearly stated in his online dating profile. I kind of see that side of it, because yeah, it’s not really cool to just surprise someone with something so fundamental about yourself. But I also see why he might leave that information out, because he probably thinks that a lot of women would dismiss him for that. And that’s probably true, sadly.

I don’t know. Is there a way to extricate myself here and not sound mean? Any ideas?